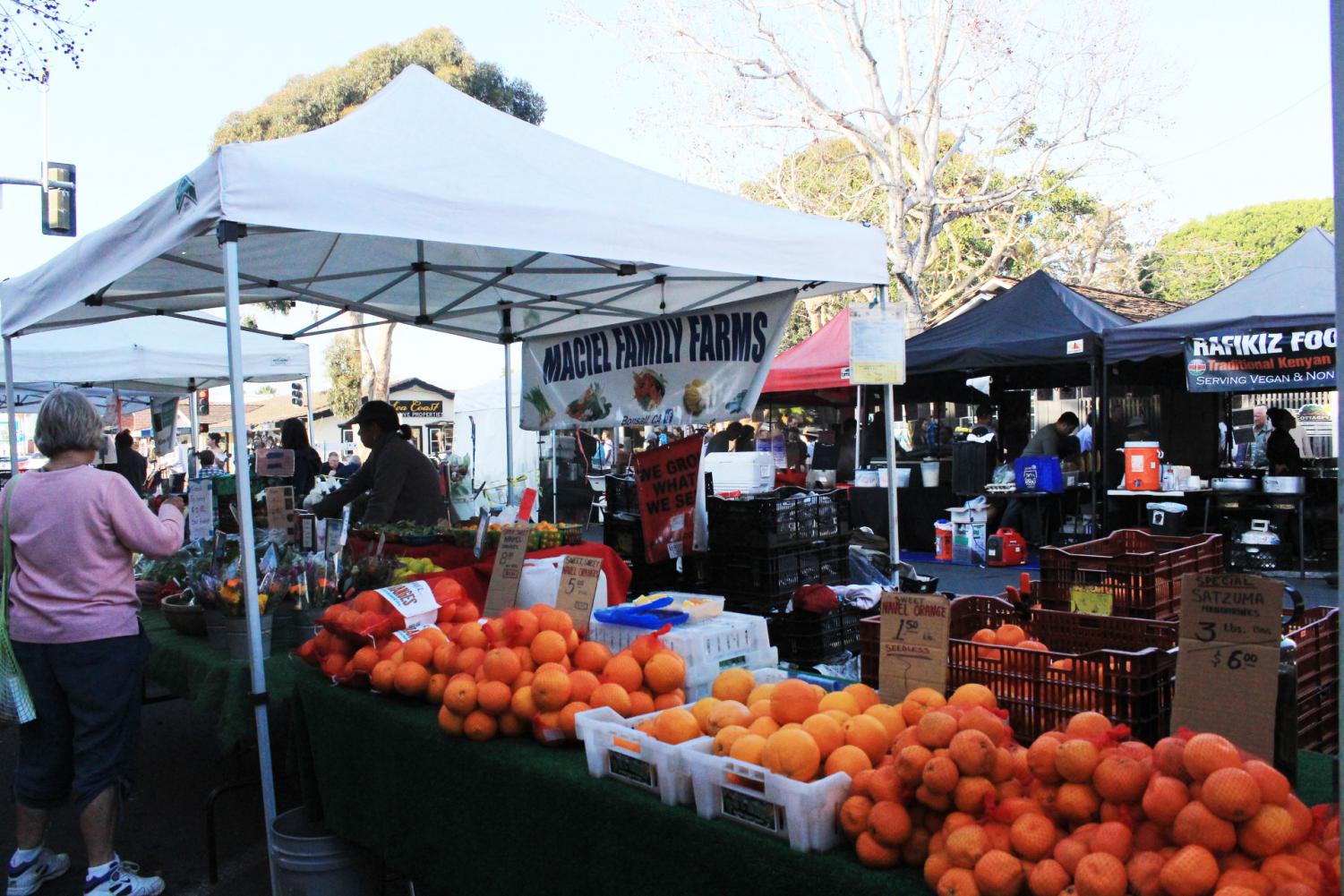 Meet the Faces Behind Your Food

Soft piano music floats through the air as shoppers roam among a myriad of stands featuring fresh produce and local crafts. The hum of conversation mingles with the music as people go about their business and individuals come together in a community of giving — people giving business to local farmer’s and local farmer’s giving produce to people.

Farmer’s markets bring people from all sorts of backgrounds together to build an experience that betters everyone involved. They inspire those who attend to try new things, meet new people and support the community. When you purchase groceries at the farmer’s market you know exactly where your food is coming from. It is always fresh and sold by people who have deep-rooted care for the food they grow. The local Carlsbad Farmer’s Market, located on State Street in Carlsbad Village, promotes many farmers that express their love for sharing their crops.

Along the produce side of the market, rows of fruits and vegetables in shades of all colors catch the eyes of those who pass by. Nasser, a local farmer, explained his love for his job and his customers as he jovially helped someone choose a ripe avocado.

“After working many years in finance, I switched to farming. It’s a good lifestyle,” Nasser said, “[My] favorite part is [the] customers; they get happy because they get healthy food.”

Nasser’s farm, Organic Only Farm, is four acres and family owned. It is located in Fallbrook and known for its citrus, avocados, pomegranates and guavas. The pride was apparent in Nasser’s eyes as he stated that “everything is certified organic.” His love for his work cannot be deterred by the difficult nature of the job.

The produce that Nasser grows reflects his care in its quality, as does most produce in the farmer’s market.

“[Locally-grown produce] is healthier, fresher and [has] better nutrients,” shared Nasser. “[People should come to the farmer’s market] because they want to get fresh produce and they don’t want something that [has been] stored for [a] long time.”

Nestled up to the left of the Organic Only Farmstand is a booth showcasing an array of fruits and vegetables from Behneman Farms. The booth was bustling with business and owner Norma Murillo took a break from weighing customers’ produce to talk about her love for her line of work.

“[Farming] is really rewarding. When you see the stuff you planted … grow and then you see it produced is just a nice feeling and we love it,” Murillo said.

Her farm is a family business, started in 1971 and passed down from generation to generation. It is now Murillo’s turn to care for the farm and she is proud of the benefits her produce brings to the community.

Moving down from Murillo’s stand, a unique sight meets the gaze of the people walking by. Miguel Almaraz is a local farmer who grows his produce without land, a type of farming called hydroponics. In the midst of the many greens he had grown, Almaraz smiled as he explained the purpose behind his uncommon approach to farming.

“Hydroponics are the new age future. Since land is starting to run out we [have] to find a way to harvest produce without using actual land and soil,” Almaraz said.

Like most of the local farmer’s, Almaraz grew up in a farming family. He remembered his first time farming with joy and mentioned the rewarding nature of his work.

“Well, I’ve kind of been [farming] ever since I was a little kid. One day my parents couldn’t find a babysitter and they took me to work one day and I started farming with them at the age of five,” shared Almaraz, “Most people think it’s kind of boring, [and] it does get boring every once in a while, but the fruits of the labor are the fruits that you are actually picking.”

The produce that local farmers grow is distributed to many different people across the county. With so many people dependent on the produce being safe, caution is extremely important when it comes to sanitization, as mentioned by Almaraz.

“The most challenging part of my job is making sure everything is sanitary because a lot of people could get sick if we mess even the smallest step up. Like washing our hands or down to the hairnets we wear,” Almaraz said.

As he organized his produce in an appealing manner, pushing the freshest greens to the front, Almaraz explained the importance of farmer’s markets in supporting small businesses as well as the beneficial nature of local produce.

“For one [local produce] is healthier. There [are] not as much pesticides or genetically modified organisms in it and it helps give back to your community. It helps farmers actually grow and kind of stops big business from taking over the little guy,” Almaraz said. “You will most likely get a better cost for the price that your paying.”

All the way at the end of the produce section of the market stands a booth marked by its diverse assortment of tomatoes displayed in an assemblage of reds, yellows and oranges. Young farmer Yolanda Gonzalez bagged some of the colorful fruits for a customer while describing her take on the good that comes from buying local produce.

“You know where it’s coming from, most of the time you can ask the farmers right there, how they grow it, what they put on it; it’s a lot healthier to get the fresh produce,” said Gonzalez.

Gonzalez also comes from a family farm, Valdivia Farms, and reminisced on the now familiar faces she sees after her already impressive number of years working the market.

“[Valdivia Farms] is a family farm,” Gonzalez shared, “I’ve been working [this market] since I was 15, and I like seeing the regulars and all the different types of people coming all the time.”

More than just an alternative place to buy groceries, farmer’s markets also create a community of togetherness, enforced by the good it does in promoting health and local pride.

“We all really know each other over here, [the farmers are all] friends now. I’ve known people coming here six years already and we’re kind of connecting,” Gonzalez said, “[The market encourages me] to eat healthier and … [to] get outside and do something.”

Murillo of Behneman Farms agrees with Gonzalez’s point on the healthy environment created by the market.

“I think I am more healthy because of this community,” said Murillo.

The State Street Market is open every Wednesday in Carlsbad Village from 3 p.m. to 7 p.m. in the summertime and from 3 p.m. to 6 p.m. in the wintertime. The community is full of people with a passion for their work and this passion is apparent in the enthusiastic atmosphere of the market. The love the people have for what they do makes a visit to the farmer’s market a wonderful experience, beyond just another way to buy produce.

“We just love doing what we do, we love selling and we love talking to people,” shared Almaraz.

As shades of pink and orange bleed into the blue coastal sky, the day draws to a close. The busy air of the farmer’s market winds down as musicians pack up their instruments and farmers fold their stands up for another day. A sense of pride buzzes in the air, and the people go home knowing they are enriching their community through the love for their work. 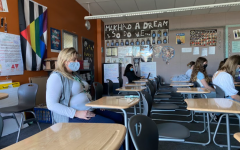 Healthy Habits: The Establishment of the “Happiness Advantage” 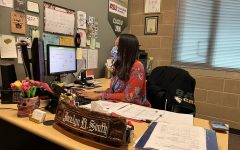 Jocelyn South: The Woman Behind the Bank 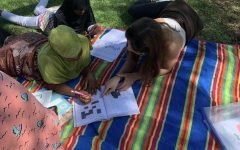 Bobcats Empowering and Educating Refugee Communities through 1 Must 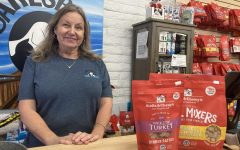 The Season for Shopping Small in the Carlsbad Village 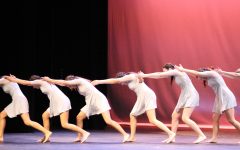