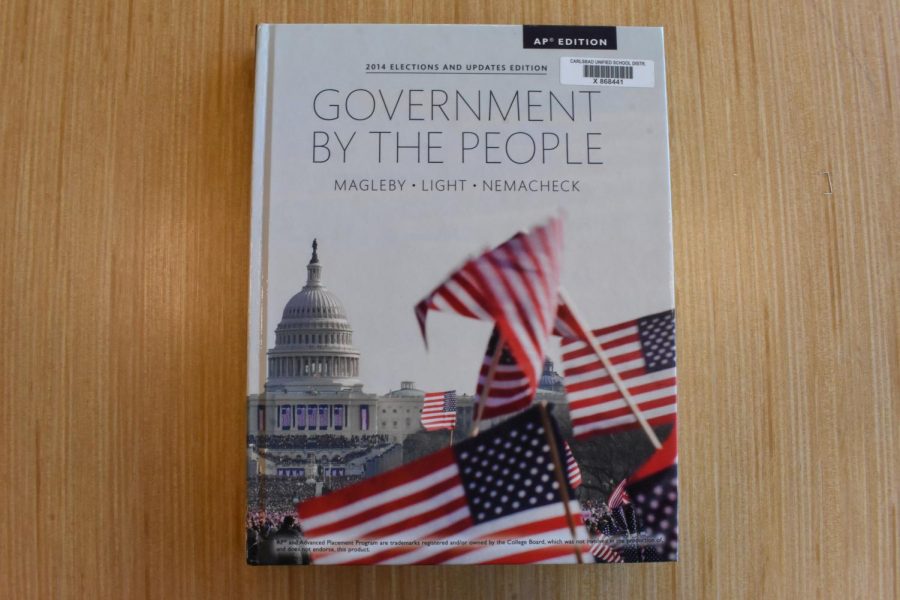 What would you say is the difficulty level of this class?

“Because of the fact that Government is typically a semester class—and we get to teach AP Government for the entire year—it’s not as difficult as some of the other AP courses because you have a longer time to teach less content, so you are able to go a little slower. Also, the free response questions that they are having this year are not like writing huge essays, so it makes it a little easier for the students. The harder part is a lot of kids have never had government before. If there in AP Calc, they’ve had math throughout their whole life; if they’re in AP Government, a lot of the stuff is really new.” (Thomas Bloomquist, teacher)

“It’s a little difficult when we have to put it into terms of multiple choice and FRQ’s but the topics themselves… are not that difficult, which is cool because it should be common sense things that we’ve heard about in the news before, so it’s not that hard because it makes sense. It’s common sense things about news, media, and the legislative branch and stuff like that.” (Mariyah Shad, senior)

“It’s an easy class if you do all the homework and there is a lot of homework.” (Wil Michael, junior)

“Because we have a lot more time it hasn’t been demanding at the beginning. It’ll be a little bit more demanding when we get into the second trimester and we need to start dealing with Congress and those types of things, it’ll become more demanding.” (Thomas Bloomquist, teacher)

“The great thing about AP Gov is that we get a lot of time to work on it in class, so whenever we have group projects or notes that we have to take, then we… are supposed to get all of it done in class, so the homework itself isn’t really that bad. The only time that we have like actual assignments and stuff is key terms, but other than that it’s mostly classwork.” (Mariyah Shad, senior)

“You have to do… ten pages of notes a week.” (Wil Michael, senior)

Any tips for students looking to take this class?

“You really need to be able to know how to stay on track with things because even though— like I said— it’s not the topic that’s hard, but it’s that you have to stay on top of reading it and asking questions in class. If you get confused on one thing… it comes back in a few more chapters, because in government everything is related, so it curves back. Basically understand it the first time around, make sure you actually read the textbook and stay on task.” (Mariyah Shad, senior)

“You got to get your American on.” (Wil Michael, senior)

Is there anything you would have done differently now that you have taken this course?

“I would probably read the textbook more, I feel like that is good advice for incoming students, since with my other classes I don’t always read the textbook in that much detail, but if I could have I definitely would have done that instead of rushing at the last minute.” (Mariyah Shad, senior)

“I would have done it exactly the same.” (Wil Michael, senior)

“For one, I think it’s a fun course. Students get to analyze their government, and it’s something that they haven’t done before, so it’s new. It’s one of the easier AP tests out there from what I’m told. I think the fact that it challenges you, it’s something new and hopefully interesting and the test is not as hard as say the AP US History test. I think this makes seniors more willing to try it out.” (Thomas Bloomquist, teacher)

What kind of careers could this class lead to?