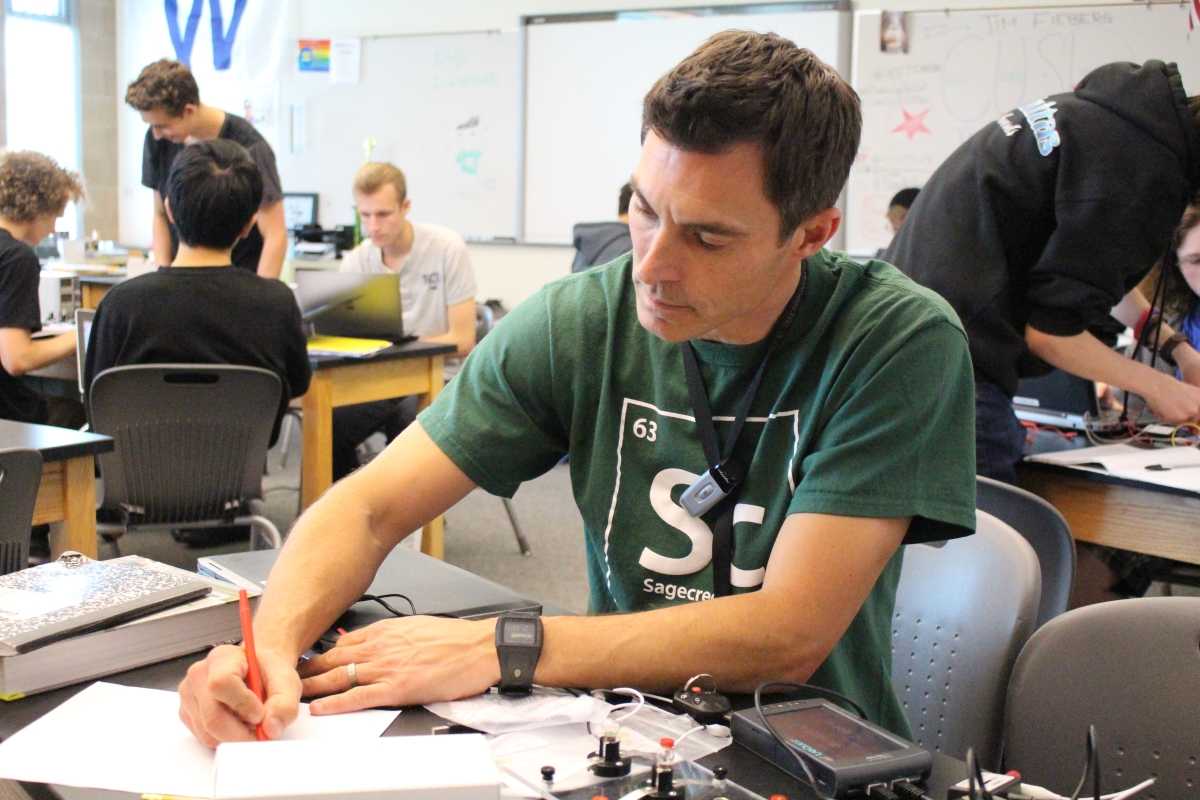 Teacher of the Year: James Fieberg

Sage Creek is still celebrating James Fieberg, who was named the Carlsbad Unified School District Teacher of the Year earlier this month.

Winning the award is an impressive accomplishment, and it becomes all the more admirable when you consider that he didn’t set out to become a teacher in the first place!

This job wasn’t always Fieberg’s dream. He wanted to become a doctor initially, but fell into teaching instead. Fieberg planned to attend medical school after college, but during his senior year, an old high school teacher told him there was a possible biology opening at his school. He had planned to wait a couple of years before he went to medical school, so he decided to teach only in the interim.

While he was waiting to see if the position became available, another group of friends told him about an opening for a biology/chemistry teacher at their school. Fieberg took the job in 1998, and started teaching at a small private school outside Chicago.

Fieberg earned his Masters in Education during the three years he worked at that school. Upon completion in 2001, he decided to make a big change and came to California. He was hired to teach Physics at Carlsbad High School. 12 years later, he was hired to be the department chair for science at Sage Creek.

After four years at this school, faculty members had a lot to say about him (good things, of course). Val Park, the bio-med teacher at Sage Creek, was eager to weigh in on Fieberg’s qualities.

“Mr. Fieberg is a positive role model on campus and on the leadership team. He has impressed all of us on the team.  He always looks at both sides of a situation when making a decision, [and] I think that is important in any leader,” Park said.

Park also highlighted that one of Fieberg’s strengths was the way he interacts with students.

“Rapport with students is important. Students need to feel comfortable in their environment and they will learn best when they are comfortable. I know Mr. Fieberg shares that philosophy. He creates an environment that is fun for students…and coming to class is enjoyable for [them],” she mentioned.

Principal Cesar Morales also commented on Fieberg’s strong leadership abilities and his initial impression of him.

“The first time I met Mr. Fieberg was when we were looking for applicants for leadership positions. My conversations with him showed a passion for getting kids excited about science. There was this commitment to provide you and your classmates a great high school experience. His knowledge, his skills, his enthusiasm…all these things are contagious and I knew…he would be a phenomenal addition to what we were trying to do here at Sage Creek,” Morales said.

In his experience as the principal of SC and as a former principal of Valley Middle School, Morales has interacted with and hired many teachers, but something about Fieberg stuck out to him.

“The thing that sets him apart from other teachers is his enthusiasm and humbleness. His willingness to try and tinker, and try new things with the angle being getting kids excited about learning,” Morales stated.

Fieberg’s District Teacher of the Year win is impressive not only considering the competition he was up against, but the relatively young age of Sage Creek, as well. Morales acknowledged this, too.

“I think it a testament. And, I think he would be the first one to tell you that this award and recognition have a huge significance for him because of the caliber of teachers we have on campus. Then, when you look at after only being in existence for four years, we have already generated one district-wide teacher of the year. [This] is telling about the caliber of teachers we have on this campus,” Morales emphasized.

Morales concluded by summarizing him as, “Just a good person. A good human being with a very strong desire to be the best teacher he can be.”

Faculty members weren’t the only ones with good things to say, though. Students, such as junior Chloe Carthy, also chimed in.

“He is probably one of the best teachers I have had…He tells you what you need to know, then you get to go explore. He knows how to get you where you need to be. He lets you learn for yourself in a guided way,” Carty said.

“He helps out with hands-on experience. He is funny, kind of quirky. He has really good banter,” Bustos said.

When Fieberg found out that he had won Teacher of the Year, he was taken aback.

“I was elated, excited, happy, proud and mainly because I was nominated by my peers. To be recognized by such an outstanding group of teachers made the award that much better, that much sweeter,” he said.

Fieberg didn’t expect to clinch the district title as well, but was happily surprised when he found out the news.

“I was in shock. It was icing on the cake of what I thought was already a great honor of being recognized by my peers….I was excited to then be able to represent Carlsbad Unified and some of the neat things we are doing in science and promote the message of our students doing science like we do here at Sage Creek,” Fieberg stated.

A good teacher can motivate students to enjoy learning. They’re often what turn a dull or challenging subject into one that the students are eager to tackle each day. The same is true in reverse.

“I like to innovate. I like to keep doing new things that challenge students. I love the kids at Sage Creek, and I think they motivate me to be the best teacher I possibly can be, and to provide the most enriching curriculum that I can possibly develop for the students here…even the freshmen,” Fieberg said.

Fieberg has been at this school as long as it’s been open, and has taken part in many enriching, enlightening, and downright strange moments.

“My favorite memory will have to be riding my scooter down the athletic field ramp at the beginning of [this] school year in my running shorts to the cheers of all the Sage Creek students,” Fieberg said.

It is undeniable that riding scooters and looking good in shorts are both essential parts of teaching, but Fieberg would argue that there’s something even more important than those.

“The number one attribute a teacher has to have is patience. The other thing is that you have to want to have fun. If you are patient with the kids and the kids are having fun and want to be in your classroom, you are going to have an excellent classroom. No matter what subject you teach. No matter what difficult lesson you are trying to get across. If everyone is having fun and a good time, you are going to be an effective teacher,” he said.

His tactics seem to be paying off. When asked to summarize Fieberg’s teaching style in one word, Bustos smiled, and his reply was quick.

One Response to “Teacher of the Year: James Fieberg”

The Sage intends for this area to be used to foster healthy, thought-provoking discussion. Comments are expected to adhere to our standards and to be respectful and constructive. As such, we do not permit the use of profanity, foul language, personal attacks, or the use of language that might be interpreted as libelous. Comments are reviewed and must be approved by a moderator to ensure that they meet these standards. The Sage does not allow anonymous comments, and The Sage requires a valid email address. The email address will not be displayed but will be used to confirm your comments.

If you want a picture to show with your comment, go get a gravatar.