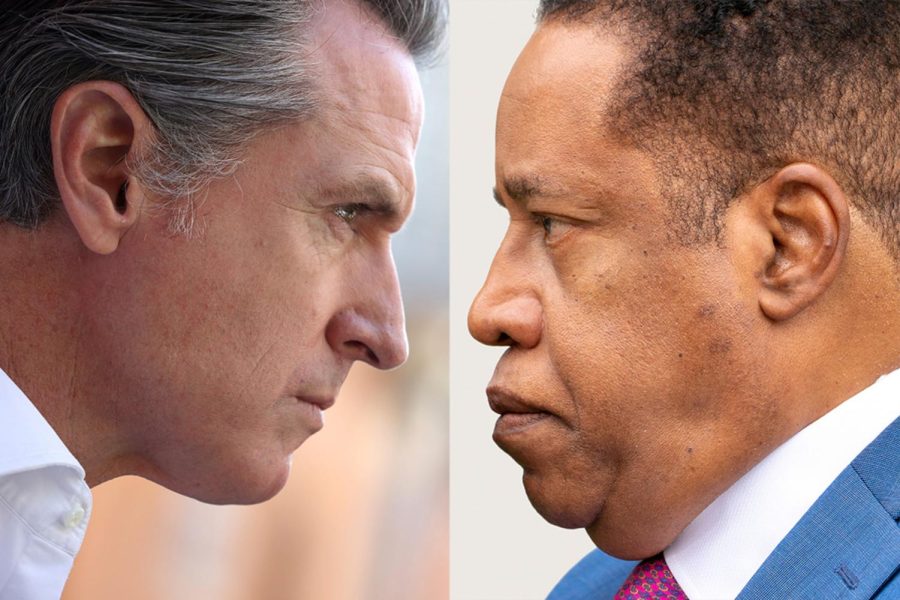 On September 14, California’s gubernatorial election took place, where people could vote to recall governor Gavin Newsom. The election resulted in Newsom staying in office. But was this the right choice?

The views and opinions expressed herein are those of the individual reporters and do not reflect the views of The Sage, Sage Creek High School, or Carlsbad School District.

Why So Many Californians Still Want Governor Newsom Recalled

California, the Golden State. Known for its beautiful beaches, warm weather, and plenty of opportunities, but what has caused 6.1 million people to flee California and move out of state?

Our state is suffering because of Governor Gavin Newsom’s hypocritical mandates. Republicans and even some Democrats both know this to be true, and may be one of the few things both sides can agree on. However, there is some good news: Californians will not just sit around, do nothing and watch our home state go up in flames.

When enough people are fed up with an elected official, they have the opportunity to recall them. On Tuesday September 14, angry and disappointed Californians casted their vote to recall the governor from office in the California Gubernatorial Recall Election and replace him with someone who would put the people of California first.

The challenge is trying to get enough people to support a recall and get the necessary valid petition signatures needed: 1,495,709. In addition, recalls are really expensive. This recall will approximately cost $276 million of taxpayer’s dollars.

While this may turn people off, the fact that the recall election happened shows that people lost patience with this governor and feel very passionate about getting him out, so much so that millions of dollars wouldn’t stop them from casting their vote.

From February to May, 1.71 million signatures were collected, surpassing the amount needed to get the recall on the ballot, showing that many people agree that Newsom is unhealthy for our state.

AP Government teacher Charity Fisher, who has experience working on Capitol Hill in a congressional office, explains how our government is run by the people.

“Recall allows the voters to be empowered to look at what’s going on and to say ‘I like it’, and ‘I don’t like it’ and to be active,” Fisher said. “Our government exists because we allow it to exist. If in our republic, we are to choose people that represent our views, and that person goes rogue, we can hold them accountable through the recall process.”

Governor Newsom has been governor for three years now and already has done a lot of damage. He raised taxes, gas prices, food prices and even homelessness has increased. People have lost their jobs and livelihood.

In this past year, 19,000 small businesses have closed, including a third of California’s restaurants, never to open again because of his mishandled response to the COVID-19 pandemic. Our schools even have one of the lowest rankings out of all fifty states.

“California’s schools are ranked No. 41 overall in America,” Deroy Murdock wrote in the article “Think Of The Children.” “While California was a dismal 36th in quality (behind No. 34, Washington, D.C.), it ranked 51st in safety.”

Retired Sheriff Sergeant Orrin Heatlie, a huge proponent of the recall, believes this recall was the best thing we could have done for our state.

“Since Gavin Newsom took office, our problems have gotten worse,” Heatlie stated for Newsmax. “Crime and homelessness have spiked since he ordered the early release of nearly 20,000 prison inmates.”

Heatlie also explains why he thinks participating in this recall is so important.

“I’m participating in something that is monumental and historic, and it’s something that this country was founded on,” Heatlie said. “We’re bringing the government back to represent the people.”

Gavin Newsom is a hypocrite. On March 19 2020 Newsom gave a list of COVID-19 mandates that all Californians must follow including social distancing and wearing a mask. However, by November he violated his own protocols: Newsom attended a birthday party at the exclusive French Laundry, and ignored his own protocols, eating and closely socializing while not wearing a mask in a crowded room full of people.

Apparently, the restrictions he enforces on all Californians don’t apply to him.

“I made a bad mistake,” Newsom said. “I should have stood up and … drove back to my house. The spirit of what I’m preaching all the time was contradicted,” he added. “I need to preach and practice, not just preach.”

Gavin Newsom is a dictating tyrant. Some may disagree on this term, however, Newsom has signed multiple executive orders that bypassed the legislature and changed laws that stripped Californians of their Constitutional rights. Newsom signed 32 executive orders from March through April on his own terms and this seize of power has not gone unnoticed.

Radio commentator Adam Carolla agrees that Newsom will continue abusing his role until he is out of office.

“It’s oppressive. Newsom is essentially a dictator, and he’s a buffoon, by the way,” Carolla stated.

California state senate member Brian Jones, who represents the 38th district of San Diego County, says Governor Newsom is governing our state single-mindedly. He believes that when a governor starts to act like a dictator, it makes them vulnerable for a recall.

“The main point about the governor is that he is trying to do things single-mindedly,” Jones said. “He needs to reach out and get input. He is acting like a dictator and he needs to act like a governor. He needs to do a better job of receiving input from other people. So, yes, I do believe he is vulnerable to a recall.”

So what’s the alternative to Governor Newsom? The candidate that got the most attention is the Republican 100% pro-life candidate Larry Elder. He has a different vision for California: from prioritizing schools, reversing tax hikes, lowering gas prices, to supporting true criminal justice reform.

“I’m running for Governor because the decline of California isn’t the fault of its people,” Elder writes for his campaign slogan. “Our government is what’s ruining the Golden State. Our schools are closed to both students and their parents.”

Elder also added, “Our streets aren’t safe from rising violent crime or the disaster of rising homelessness. And the scandals of Sacramento aren’t going to stop on their own. It’s time to tell the truth. We’ve got a state to save.”

However great Governor Gavin Newsom has been portrayed by the press, he has done more harm than good to the place we are blessed to call home. Who knows how many more protocols he will give out to us and not follow himself, how many more homeless will end up on the streets, or how much more will taxes rise and make it too expensive to live here.

How are we free if the vaccines are becoming mandatory while some people don’t want to get them for certain events? How many more voices will be silenced or muzzled by the masks that we wear every day? How many more businesses will be destroyed?

So stay informed and fight for what you believe in. Vote for things that matter to you, so your voice can be heard. Remember what Thomas Jefferson once said about freedom:

California’s gubernatorial election took place on September 14 of this year, and while Gavin Newsom’s retention served as an upset to some, it was the necessary outcome for the security of California and the nation.

Some of Newsom’s actions over the last few years of his term were controversial, the main spark of this recall election being his breaking of the COVID-19 Protocols that he instituted. While this action may speak against his character, this grievance pales in comparison to the negative traits of Newsom’s potential replacements.

The leading opponent in the recall election was Larry Elder, a libertarian talk show host turned candidate whose views are immensely misaligned with those of the state.

California’s voter registration stands at 46.2% Democrat and 24.1% Republican, and this large democratic majority is often reflected in the state’s views. 59% of the state is fully vaccinated and another 13% have at least one dose of a COVID-19 vaccine, a percentage that reflects the left lean in the state.

Elder opposes mask and vaccine mandates, making claims against both in an interview with CNN.

Despite Elder’s claims, evidence of the effectiveness of vaccines and masks is clear.

“Vaccines available in the United States are highly effective at protecting against the coronavirus, including the delta variant.” claims the CDC.

Even though vaccines have been shown to protect against COVID-19, less than half of the United States population is fully vaccinated

“When a person gets infected who has been vaccinated…and they get infected with the delta variant…those individuals can and have transmitted the virus to uninfected individuals.” Anthony Fauci, MD, the top U.S. infectious disease expert, said.

High-performing masks such as N95 or KF94 are essential in ensuring the safety of unvaccinated and breakthrough Americans.

Elder’s false claims against vaccines and masks could prove dangerous to easily influenced voters who would take this advice against the urges of scientific professionals.

Along with a general pro-vaccine attitude, the state is also vital when it comes to environmental issues. Elder believes that global warming is a myth, and opposes many of California’s ambitious and nationally impactful climate policies. As governor he would have had the power to veto vital environmental policies, potentially damaging the state’s history of strong environmental law that is necessary for combating climate change.

One of the greatest concerns surrounding Elder’s beliefs is his history of not supporting issues important to the majority of the Black community.

“Whatever the issues are where the Black community rallies together, he goes out of his way to be on the other side. That’s just who Larry Elder is.” Kerman Maddox, a political consultant opposed to Elder’s run for governor, said.

“His thinking is so far out of the mainstream, I would tell people, ‘Don’t pay attention to the guy.’ People like that crave attention,” Maddox continued.

Maddox’s main concerns lie with how Elder would tackle Black Californian’s issues and where his priorities lie.

“What bothers me is that Larry gives comfort to the people who are white supremacists, or who don’t believe racism exists.”

As a majority Democratic state, Maddox worries that Elder’s election would set back the Black community and many progressive policies.

“If a guy like this wins in a blue state like California, can you imagine what role he plays nationally in 2022?”  Maddox said.

Elder holds many other radical Conservative ideals that would pose a danger to Californian constituents. His opposition to gun control laws and Roe v. Wade goes against the ideals of the state, and his election would have been detrimental to California’s progress.

The original petition for a recall election began in June of 2020 and was started by Californians who were unhappy with Newsom’s COVID-19 response and other actions. In the lead-up to this year’s September election, $276 million taxpayer and state dollars were poured into the recall efforts, but in the end, Newsom secured a win with 61.9% of the vote.

This huge cost does not even take into account the large amount of money spent on the individual campaigns of the candidates.

With Newsom already three years into his term, the decision of his opposers to waste so many millions of dollars was illogical and took up time that Newsom could have devoted to advancing the needs of his constituents.

This recall election was unnecessary and wasteful in many ways, but despite that waste, the security of Newsom’s governorship is vital to the security and progress of California.