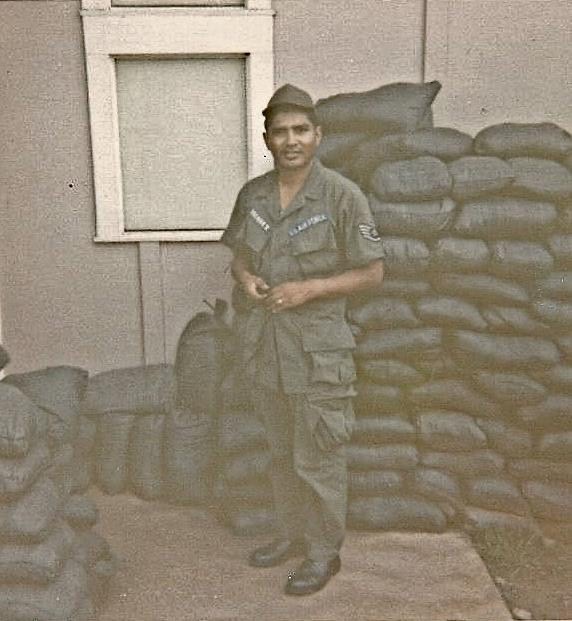 Vasquez stands at base in Vietnam during his deployment. Vasquez served for 20 years from 1957-1977.

In Loving Memory of Leonard Vasquez

Leonard Vasquez, better known as “LV,” was born in 1937 in Fort Madison, Iowa. He spent a majority of his younger years spending time with his seven siblings. At the age of 20 he married his wife, Sabina Vasquez. In 1957 LV joined the Air Force and was first stationed in Little Rock, Arkansas where they had their first two children, Leonard Jr and Steven. LV and Sabina moved around the world and raised two more children, James, and eight years later, when stationed in Germany, their last child, Sydney Niems. Throughout his years in the Air Force he served in the Vietnam War, and then retired after  20 years of service with the rank of TSGT.

He is survived by his wife Sabina, two of his siblings, Mary and Charlie, his children, Steve, Leonard, James, and Sydney, and  six grandchildren, Steve Jr. Anthony, Gabriella, Bryan, Torie, and Isabella.

LV would always tell the story of his time in Vietnam. He remembered having to pick up his commander when he arrived in Vietnam and not knowing whether he would make it back to base camp alive. The entire drive there and back his car was shot at a multitude of times and by the time he picked his commander up and got back to base camp, the car was covered in bullett holes.