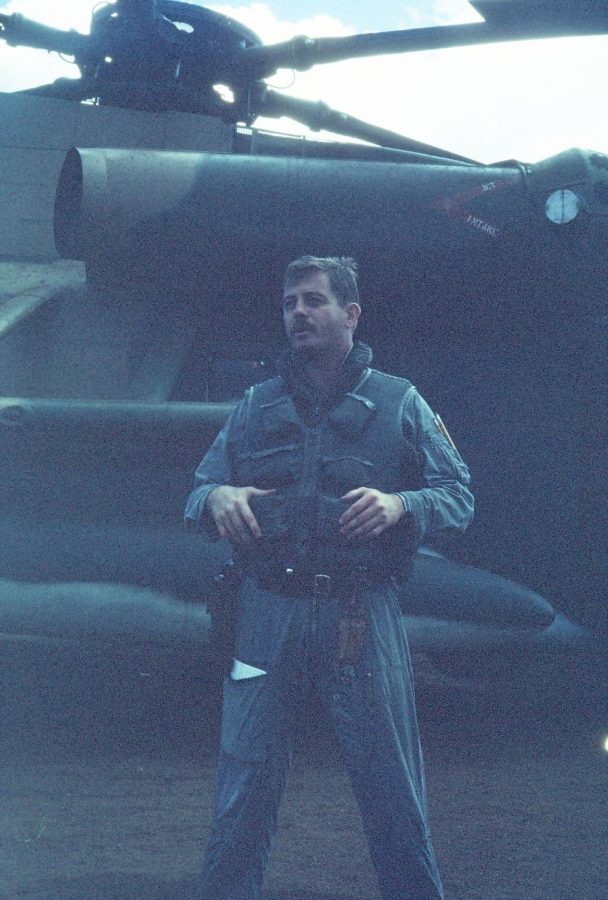 Jones stands in front of his helicopter. Jones served in the military for 20 years.

Deployment Locations: England, France, Saudia Arabia, Norway, Vietnam for a little over a year, during the war.

Jones graduated from high school and worked in the steel mills in the Pittsburg area. His work was hard and long, and it seemed time for a change. His friend, Zeke,  and him talked about joining the airforce. At this point they went to the city and took a recruitment test to see their qualifications.  As the test finished, a sergeant walked in announcing that he needed to talk to Jones and Zeke. It was an extremely happy moment when the sergeant stated that the two men had qualified to go into flying training. Jones then started his training and first became a navigator. Soon after he got commissioned as a first lieutenent and got to apply for flying school and go through that process of becoming a pilot.

His office room is lined with pictures and plaques that exemplify his service days. Once leaving the military he realized all of the wonderful opportunities it had given him. He earned a college degree while serving and was able to get a plethora of jobs right after his retirement.

During his time in Vietnam, he was a combat sergeant for rescue helicopters.

“That was one  year of a very rewarding experience,” said Jones.

They rescued people that were shot down which he later received the silver star for, which is the nation’s third highest award for combat activity. During this period he rescued two Navy pilots in 1959 right near the Hochi Mihn Trail. He received a call at 2 a.m. that the two pilots had gone down and Jones needed to be there to rescue them at daybreak. One of the navy pilots  had lost his radio, and he didn’t know that the other pilot got shot down so close. Jones picked up the other man who had the radio first, and then the pilot without the radio who was thankfully spotted by a fighter aircraft that went along with the combat sergeant rescue helicopters. But, what is ironic about this story, is that this wasn’t the end of Jones’ sotry with one of the Navy pilots. Three years ago he recieved an e-mail from the helicopter association saying that someone wanted his information and was it okay to give it to them. He said yes, and a few weeks later was contacted by one of the Navy pilots. The pilot has ironically been living right in Rancho Santa Fe, and after this discovery, Jones and the pilot have been meeting on a regular basis to catch up on the past, and continue a wonderful friendship.