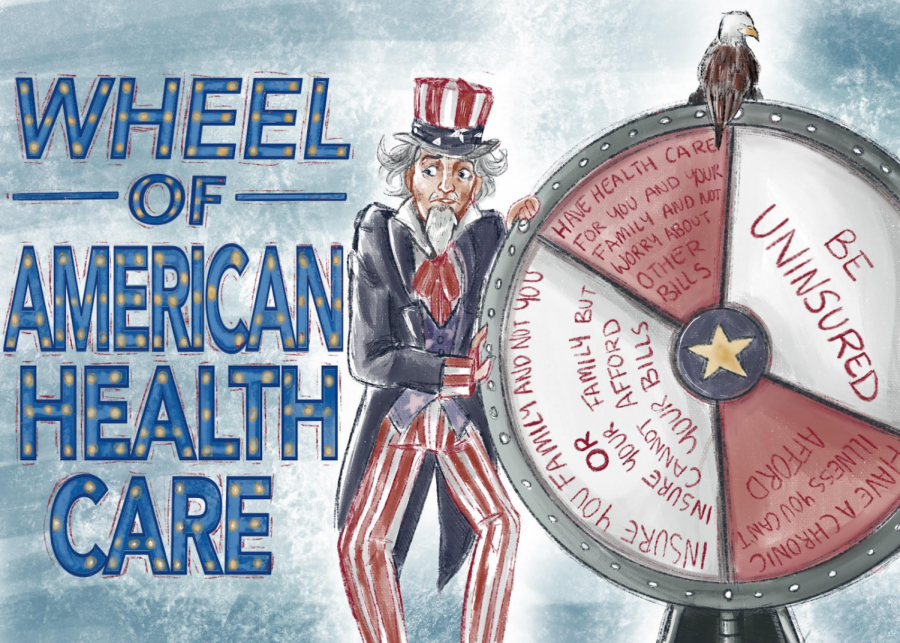 The healthcare system in America is truly unpredictable. It has its benefits, but it also has its drawbacks; oftentimes, Americans are not given the proper care that they need.

Universal Healthcare: A Difference of Opinions 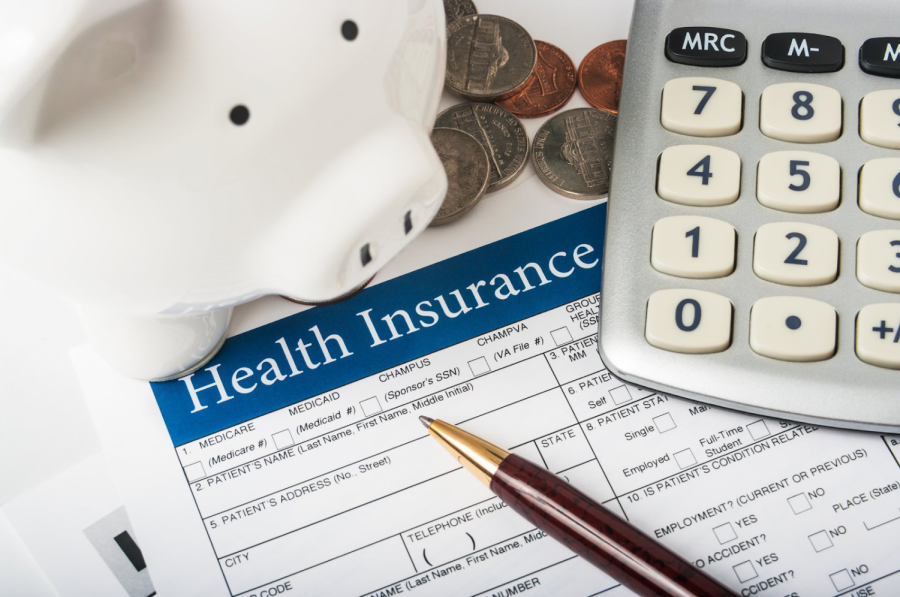 Health insurance keeps Americans in unfulfilling jobs, and partners in dangerous marriages. Single-payer healthcare would erase the trade-off between being insured and being happy.

Last year, I read about a mother choosing between her baby’s future and her health. Charlie, her daughter, was born prematurely and she started speaking at 3 years old; most babies typically start to speak at 6 months old. The mother, Rebecca Wood, cracked a tooth at around the same time her baby began to speak. Wood could not afford to pay for both speech therapy and a root canal: the choice was between her daughter and herself.

Wood paid for her daughter’s speech therapy in 2015— because of this, she was punished for that decision when an infection spread through her mouth and jaw. During surgery, she could not pay to be put fully under as the dentist drained the infection, scraped away part of the jaw, and pulled out all of her teeth. Today, Wood wears “poorly fitting” dentures— insurance only covers one new pair every five years. “[T]his is the price of a miracle [her daughter],” she states in the article.

That’s not a price that Wood should have had to pay.

It may seem aloof to be discussing a policy revolution as our country struggles through a pandemic; however, the price Wood paid was preventable, just like the sacrifice Americans are now making to cover up for our government’s failure to prevent or combat the coronavirus. If the United States adopts single-payer healthcare now, our gain would be both immediate and long-lasting.

In Germany, a country with one of the lowest fatality rates caused by COVID-19, testing has been free and widely available since the first few weeks of the outbreak. “One key to ensuring broad-based testing is that patients pay nothing for it,” reported Professor Streeck, a director of University Hospital Bonn. Meanwhile, in the United States, testing has only been widely accessible for a month.

Susanne Herold, a lung specialist at University Hospital in Giessen, Germany, is optimistic: “We have so much capacity we are now accepting patients from Italy, Spain, and France.” Contrast that with the US where AP reports that hospitals, state governments and FEMA are bidding against one another for critical resources.

In short, the US healthcare system has left us on the wrong foot to deal with the coronavirus outbreak.

Putting aside the current crisis, “medical innovation”, which America’s hybrid healthcare system relies so heavily upon for public and financial support, is a farce. Leigh Phillips and Michal Rozworski (2019) find in The People’s Republic of Walmart that “more than three-quarters of really new drugs… are already developed in government labs” and that what pharmaceutical companies call “innovation” is actually “slight tweaks [to existing drugs]… that they then can patent” (qtd. in Burgis). Essentially, pharmaceutical “innovation” is a hoax— public, national investment, on the other hand, is targeted and transparent.

According to the Council on Foreign Relations, paying for employee insurance makes US companies less competitive abroad. Single-payer healthcare would ensure that no major company can excuse mass layoffs as a fault of health insurance.

Rebecca Wood is just one of many U.S. citizens forced to make a choice between two evils.  Every day in America, patients have to make that calculation: choosing between their health, the health of someone they love, and the payment of medical bills. One proposal of single-payer healthcare is that essential expenses are not paid out-of-pocket, meaning that anyone, regardless of the status of their bank account, can pay for the care that they need.

However, single-payer healthcare raises concerns about a government monopoly, restricting freedom of choice— “taking medical decisions away from patients,” as Stanford policy expert Lanhee Chen puts it. While this claim seems intuitive, consider the number of people that are tied to their private insurance. How many employees can’t strike out on their own because they will lose their coverage? How many husbands and wives stay with abusive spouses because of their binding health insurance? Single-payer insurance would give Americans greater freedom of choice in their lifestyle and well-being.

Rebecca Wood’s struggle with her private insurance is just one example of how private insurance violates the American ideas of choice and equal worth. To me, universal single-payer healthcare is about the message: no man left behind. America’s values inform every aspect of universal healthcare: by nature, distributed equally; its low cost allows for every American, whether working for a megacorporation or self-employed, to decide what they want for themselves and for their future. 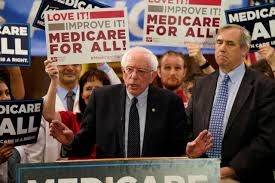 Healthcare is a hotly discussed topic right now in the United States. Bernie Sanders and Elizabeth Warren have helped to popularize the idea of a single-payer healthcare system; furthermore, it has been a topic of conversation with COVID-19 fresh on everyone’s minds, mainly Generation Z and Millennials; however, this poses the question of whether or not it is the best course of action that our nation should take. Indeed, a single-payer healthcare system will fail our citizens as it is failing in other nations around the world.

What many people don’t understand with single-payer healthcare is that medical decisions are in the hands of government bureaucrats, not you. What is American about having no freedom to choose what healthcare you can have? According to an article published by the Hoover Institution at Stanford University, healthcare “gets rationed” by government officials in nations that have adopted a single-payer system. For instance, the National Health Service (NHS) in the United Kingdom provides very limited access to cataract surgery, hip and knee replacements, MRI scans, and even prescriptions that treat diabetes and chronic arthritis. In the United States, this is not an issue: the Affordable Care Act makes it clear that private insurance companies cannot refuse treatment to patients that have pre-existing conditions. Furthermore, wait times are grueling in nations such as Canada and the United Kingdom, where, according to an article from the New York Times, it can take up to twelve hours to see a doctor for an emergency.

Bernie Sanders and Elizabeth Warren have made it abundantly clear that they would eliminate private health insurance for American citizens if they were to be elected. Would this be the best decision economically? Both candidates have repeatedly claimed that this healthcare plan would be just like Canada and Europe. There is one problem with that: European nations and Canada both possess private insurance plans due to the overwhelming cost of only a single-payer healthcare plan. In fact, Canada’s healthcare system consumes a staggering 43.2 percent in Ontario in 2016. The Fraser Institute also estimates that with the current population growth and growth of single-payer patients, Ontario’s health care expenses are “projected to grow at about 5.3 percent per annum on average”. This means that Ontario will be spending about 80 percent of their whole budget on only healthcare by 2031. Why would the United States want a system like this?

When we need surgery, we do not fly to Canada, South Africa, Israel, China, the European Union, etc. When we need surgery, we are in the best nation in the world to receive treatment. The quality of American healthcare is so much so that people outside of the U.S. fly here for the sole purpose of receiving our healthcare.  This reality is supported by recent studies from the National Center for Biotechnology Information found that there are “deficits in several areas including angioplasty, cardiac catheterization and intensive care” in Canada’s universal healthcare system. Consequently, from government-funded healthcare, Health Economics and Policy (J.W. Henderson, 2014) reveals that there are “245 CT scanners . . . one for every 123,500 citizens” in Canada. In the United States, there are “3,667 CT scanners, one for every 73,000 Americans”.

It should also be noted that the majority of funding for biomedical research comes from private insurance companies. This is primarily due to the fact that discovering cures can make a profit; therefore, it can be concluded that competition among insurance companies often leads to innovation in the biomedical field. We see this idea at play when observing that funding for research provided by drug companies has increased by $4.3 billion from 2008 to 2013. Of course, I am not suggesting that utilitarian motives have no place in driving this competition; however, I am suggesting that finance surely holds a place in motivating the private sector to compete in biomedical research. Due to this enormous funding from private insurance companies, the “U.S. still leads the world in research and development expenditures” (University of Michigan 1) in comparison to our single-payer counterparts.

In 2011, Vermont guaranteed universal healthcare for its residents.  In 2014, Vermont repealed this law due to the fact that regulating this system would require momentous tax rates on its citizens and small businesses.

Politicians like Sanders, Ocasio-Cortez, and Warren have all indicated that their ideal system of universal system can lead the American people closer to one thing: a utopia.  Why wouldn’t we want to be like the Sandanavian nations?  The problem is like many pursuits for a utopia, a dystopia always develops from utopian ambitions.