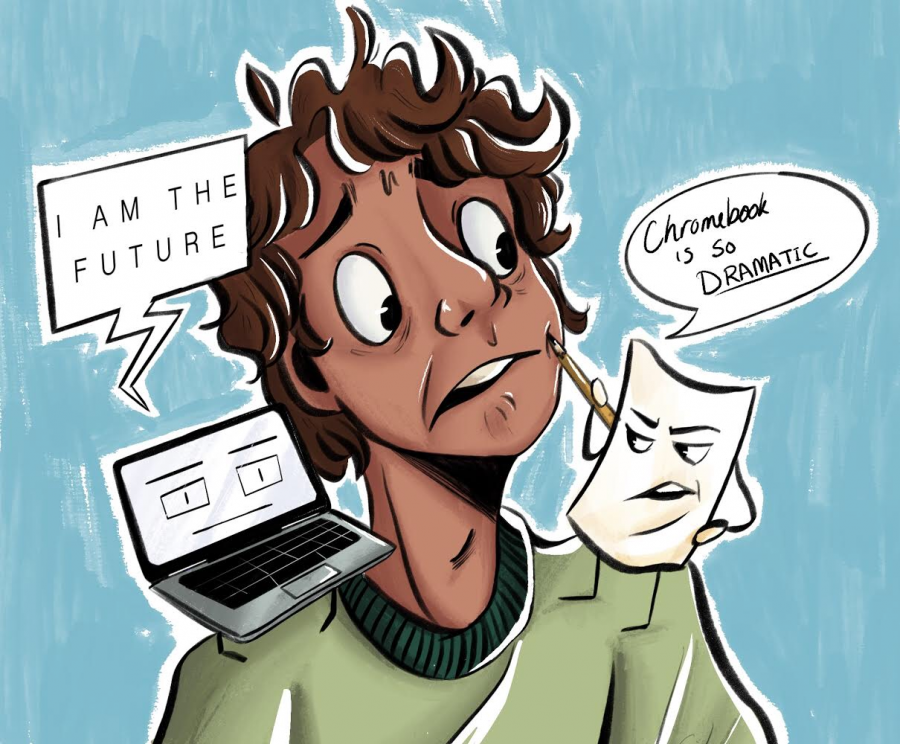 Students have been given access to personal Chromebooks and have the ability to take the computers just about anywhere. But is this a good thing?

Should Chromebooks Be Required?

This school year has been the first year that the entire student body has been granted the privilege of owning Chromebooks. This advancement is key to becoming an even greater school and here is why:

Chromebooks offer much better mobility for students: they provide students who may face financial struggles a chance to do work outside of class. They also allow teachers an easier time assigning classwork and homework.

Since the start of personal Chromebooks at Sage Creek, students have been able to keep better track of their work and take their work with them everywhere they go. Chromebooks can be used anywhere, as long as they are connected to the internet.

Chromebooks have opened the eyes of many teachers. Every teacher now has access to Google Classroom and other sites that facilitate work. Along with making homework and classwork easier to navigate, there is less paper being used. With the district exceeding 11,000 students, according to Cartridge World, our campus population is typically expected to use over 28 million sheets of paper a year. With Chromebooks, the number can be reduced drastically.

Because Chromebooks are cheap, costing around $249 the school is able to provide one for every one of the 1,151 of students. According to Data USA the average annual income of Carlsbad is $102,722. While this is higher than the overall average of the USA, there is still a 6.65% poverty rate. The school can spend more money supporting students who need extra financial support instead of spending it on paper and ink.

Now that the school year is more than halfway through, valid opinions can be formed about their benefits. The Chromebooks are extremely beneficial for the school and are key to bettering the school even further.

Sage Creek prides itself on its innovative take on high school education. In addition to offering core classes like math, English, science, language and a variety of electives, SCHS offers two pathways: Engineering and Biomedical Science. Through these pathway classes, students gain skills that more tangibly apply to their future lives as professionals and citizens. Ultimately, Sage Creek has proven itself willing to buck trends in favor of new approaches that teach students more useful life skills. This can even be seen in Sage Creek’s list of “core values” listed on the front page of our school loop website. It seems that most everything at SCHS is built with this principle in mind, with only one notable exception: Chromebooks.

Google champions simplicity as one of Chromebooks’ core ideals, that much is apparent when you visit their ‘Meet ChromeOS’ web page. Although this ease of use may be beneficial when typing in Google Docs or when using Google Slides, it is highly detrimental to students’ ability to learn vital technical skills. As the world around us becomes increasingly dominated by circuitry and processors, a more detailed understanding of the machines that surround us becomes necessary. That understanding should be deeper than simple web browser use, in any case. Should students fail to understand technology when they are in high school, they will be unable to make beneficial choices later in life as consumers.

Although it may seem like it at face value, Google’s efforts to introduce their products into a more educational setting are not quite altruistic. In exchange for providing chromebooks and other products, the corporation hopes to gain access to the next generation of computer users. According to a New York Times Article titled: ‘How Google Took Over The Classroom,’ some schools even encourage their students to graduate from Google learners to Google consumers.

“Every year, several million American students graduate from high school. And not only does Google make it easy for those who have school Google accounts to upload their trove of school Gmail, Docs and other files to regular Google consumer accounts  — but schools encourage them to do so.”

Chromebooks are the foundation of a Google-branded ‘walled garden’ being built around students. In keeping its operating system simple and easy to use, Google aims to limit the choices that students can make as consumers once they graduate high school.

In the open market, there exist many consumer and privacy-friendly alternatives to Google’s line of products; however, many of these alternatives demand technical skill from the end user. Students who are taught exclusively using Chromebooks are simply denied the ability to choose those alternatives.

That very same lack of technical skill may even have larger implications for our planet’s future. One article from United Nations University demonstrates as much.

“Experts foresee a further 17% increase — to 52.2 million metric tonnes of e-waste by 2021 — the fastest growing part of the world’s domestic waste stream.”

Repairing technology requires a great deal of technical skill. For much of the population, computers resemble a black box; they can be used to accomplish tasks, but their inner workings remain arcane and mysterious. Therefore, it is far simpler to throw away old or malfunctioning electronics. By failing to teach students those technical skills, Chromebooks help perpetuate this attitude towards tech, and the ‘throw it away’ mentality that follows.

Although Chromebooks may be beneficial in some aspects, they ultimately fail to support SCHS’ “core value” aspirations as a school. Unlike many of the other innovations put in place at Sage Creek, they do not teach students vital skills that will help them make better choices. They may be convenient, but that convenience comes at a great cost to students and the planet.