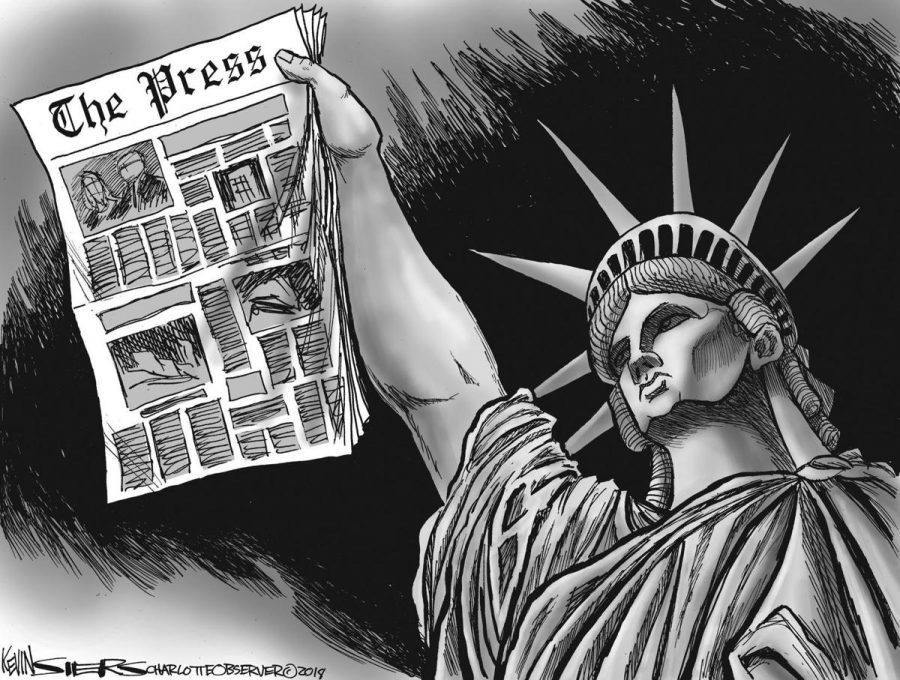 The Statue of Liberty upholding the newspaper to symbolize America’s freedom of press. The topic of freedom of press dates all the way back to the creation of the printing press and carries on as a relevant topic into the modern day.

The Government vs. the Press: An Argument Into Today

Government Against the Press

Factual reporting and persistence creates an ethical journalist that informs the people accurately on worldwide events, yet tons of credible reporters wind up in a casket from unnecessary violence.

When you think of dangerous jobs, you most likely think of positions such as being a police officer, firefighter, or military officer, though the statistics showing the shocking death rates of worldwide journalists proposes an additional job that poses a threat to its employees.. According to the Committee to Protect Journalists, statistics show within the past ten years, 647 journalists and media workers have passed due to murders, crossfire, and dangerous assignments.

Most modern issues roots from a significant influence, and in this case, it’s the government. Over the past few decades, presidential figures and the press have conflicted on the note of privacy and the media’s impact. The trend dates back to second President John Adams’ as it was found he had an unhealthy and manipulating relationship with the press, resulting in him pushing through the Sedition Act of 1798.

The History House had shown how this was an act that presents a threat to anyone who publishes “false, scandalous, or malicious writing”.

Furthermore, The New Yorker exemplified President Nixon’s watergate scandal exposed by journalists as an accurate instance of the press and presidential argument as it had made Nixon “bitterly and publicly criticized that institution”.

Looking at these previous events, it would be safe to assume presidents commonly do not mix well with the media.

Continuously, The New York Times reported on how Donald Trump has carried on this trend recently when he had premiered a video privately in a meeting at his Miami hotel. This video had shown him harming a variety of his competitors and journalism companies. In the video, Trump’s head had been overlaid onto a man’s body who was wearing a pin-striped coat, entering the “Church of Fake News” as The New York Times has termed the video’s opening shot, proceeding by showing Trump having no mercy to competitors like Bernie Sander and organizations like CNN, HuffPost, and NBC: All either gunned down, stabbed or lit on fire.

This gruesome video promotes the concept of the president becoming violent with the media, which could potentially be viewed as an influence to others to do the same, causing a greater increase in the dangers of being a journalist. Although the media has occasionally irritated individuals such as presidents for some time, releasing a threatening video is definitely not the right way to address this ongoing issue in consideration of the current occurring risks. Not to mention, the informality of the video he posted at his Miami hotel meeting had been an act of immaturity and disrespect.

Nonetheless, I believe that the way that the government is currently operating, with their fatal feud with the media, it seems they do not want change as they are addressing the issue through violence, crossing the line of freedom of the press.

The Press Against the Government

Freedom of speech and press has been in debate for decades, especially between journalists and the government.

Although journalists should have the right to report the truth, there should be limitations set regarding what they can report for the good of national security.

It is not new that the government is worried about the after-effects of secret information being released into the public by journalists without permission; they have the right to withhold information, and if released without consent, it is a violation of rights.

The government faces an overload of press every day; if they fail to address an issue, some journalists invade government privacy.  For instance, the Pentagon Papers, top-secret information regarding U.S political and military involvement in the Vietnam War, was published without consent. Yes, journalists have the right to freedom of speech and press, but there should be boundaries in place to respect one’s privacy. For example, journalists should respect people’s decisions to withhold information, because all people have the right to stay silent. Also, journalists should be cautious when mentioning anything about an individual’s private life. In other words, no information should be obtained without consent.

According to an article written by Derigan A. Silver, Assistant Professor in the Department of Mass Communication and Journalism Studies at Denver University, it states that the 1917 Espionage Act “makes it a crime for an unauthorized person to receive national defense information or transmit it to others.”

Although many argue that this is against the First Amendment, putting the United States in danger due to the release of highly classified information can lead to large problems.

To sum it up, even if we as student journalists are not dealing with top-secret government information, it is still important to respect an individual’s privacy when publishing information. By doing so, we can create a safe school environment.