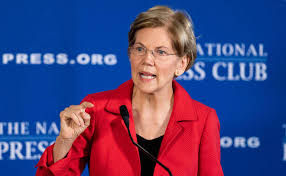 Elizabeth Warren on Climate: Don’t Worry, She’s Got A Plan For That

“Tackling our climate challenges will provide us with the opportunity to grow our economy, protect public health, and propel the United States to become the world leader in green innovation in the 21st century.” E. Warren

Warren is all about each person and each company taking responsibility for what they have and why. She wrote the “Climate Risk Disclosure Act” which would require companies to tell the public how climate policy and climate change would affect their income. This would make it transparent to the public why certain companies take the stands they do and how they are personally being impacted by the decisions made regarding the climate crisis. The bill was unsuccessful but it gives us a glimpse in the direction Warren is heading in regards to climate policy.

Warren’s Plan for the Future

Warren is now known for the phrase “I have a plan for that…” and the climate crisis is no exception. She has a plan which includes green manufacturing, fighting corruption (specifically the relationships between government and oil companies), clean energy, and is also focusing on international efforts for a clean planet since the only way to effectively save the earth is with all international powers on board.