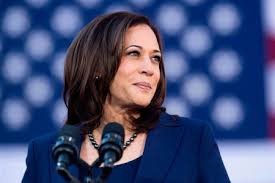 Harris is a representative of our home state, California.  As we know, California is known for initiating environmental policy, and Harris has taken part in this. She has stood up to fossil fuel companies and has consistently opposed Trump’s efforts to roll back environmental regulations in her position as a Senate minority. Naturally, she has also fought to protect California. She has taken on Republicans regarding offshore drilling and automotive regulatory rollbacks that would have negatively impacted California’s environment.

What’s Her Plan For the Future?

Harris says that her “plan sets out a bold target to exceed the Paris Agreement climate goals (which include keeping our worlds CO2 levels at a safe amount and “regularly reporting our emission and implementation efforts”) and achieve a clean economy by 2045… [in order] to stave off the worst climate impacts.” Her plan is based around her slogan “For the People”, she believes that the people directly impacted by climate disasters such as indigenous people, and people of color should be the ones leading the push for a healthy world, not harmful companies profiting from destroying the planet. She claims that with her past experience she is ready to take on powerful polluters and create a clean economy. At her core, she has faith that “ Together we will build a Climate Plan For the People that prevent the worst climate impacts while creating thriving communities for ourselves, our families, and future generations.”