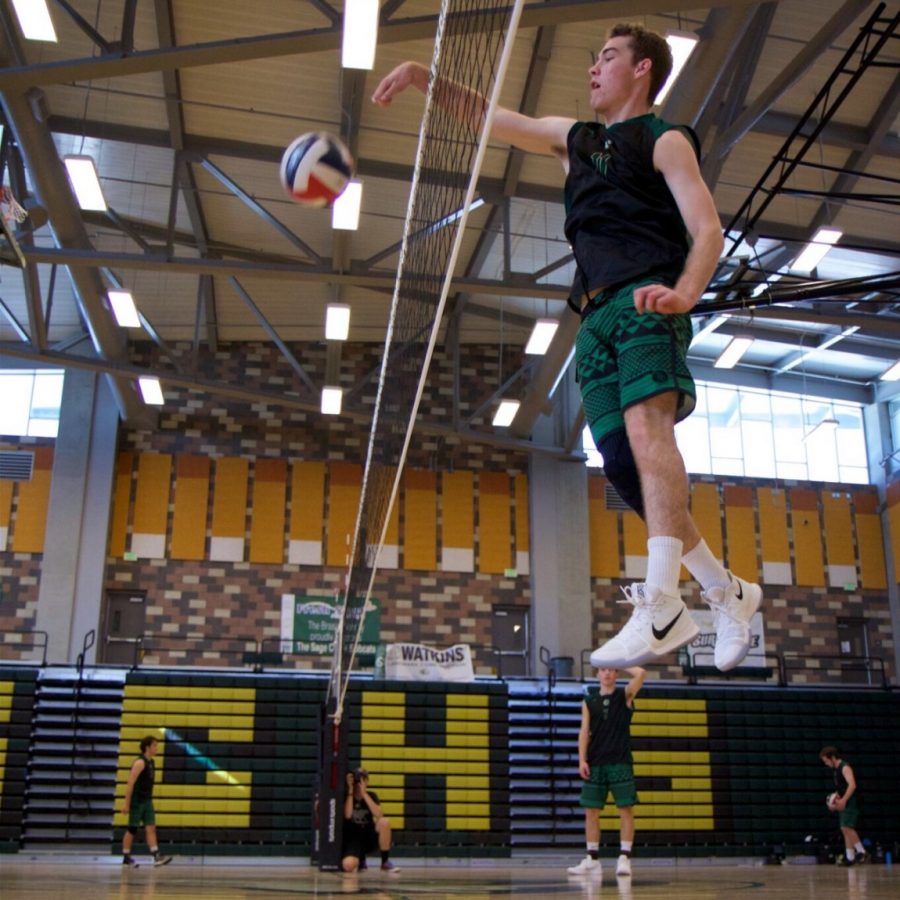 Christian Janke spikes the ball down on his competitions side. Janke stepped up again this season and led his team to a winning season.

Christian Janke. There’s not much you can’t say about him. Over the years, Janke has accomplished things high schoolers dream of doing both on and off the volleyball court. From Freshman year to Senior year, some say Janke can be seen as one of the best athletes to come out of Sage Creek. Kind-hearted and high-spirited, Janke looks to just have fun all the time and leave everything he has on the floor.

His story might surprise you, however; Janke didn’t start playing volleyball until Freshman year. At a young age, Janke explained to The Sage that he used to “watch his siblings play.”

“Before I got to high school, I thought, ‘well that looks fun, I might as well try it,’” Janke explained.

“I was actually really into basketball at the time and didn’t think that volleyball would be something I really loved, but I did.”

Trying to play basketball, volleyball, and keeping up good grades can put a strain on someone. Janke told us that there was a lot of interference between the two sports. Schedules weren’t adding up and ended colliding with one another, forcing Janke to pick a sport essentially.

“My club volleyball interfered with high school basketball, and eventually I got too tired from doing so much stuff all at one time. Going to two practices a day just wasn’t gonna cut it anymore.”

If you’re wondering what club volleyball is, it is essentially a travel team for volleyball that go play on tournaments around the world and is a completely different beast from high school play.

“Club kinda takes the best players from everywhere and puts them on this ‘all-star’-like team, and you get to play players of the same caliber from all over the country. You also get to compete in cool places, such as we’re playing in Phoenix this year in the Junior Nationals and other big tournaments that you don’t really get to do in high school.”

Now committed to Grand Canyon University, Janke is looking forward to playing at the collegiate level. He will play on the Men’s Volleyball team for Antelopes this coming Fall.

As he continues his journey, Janke would like to thank everyone that has been in his corner throughout his journey to becoming the man he is today.

“I just want to thank all the coaches, all the teammates I’ve had throughout the years and most importantly my parents. Without them I couldn’t have been in the position I am today.”