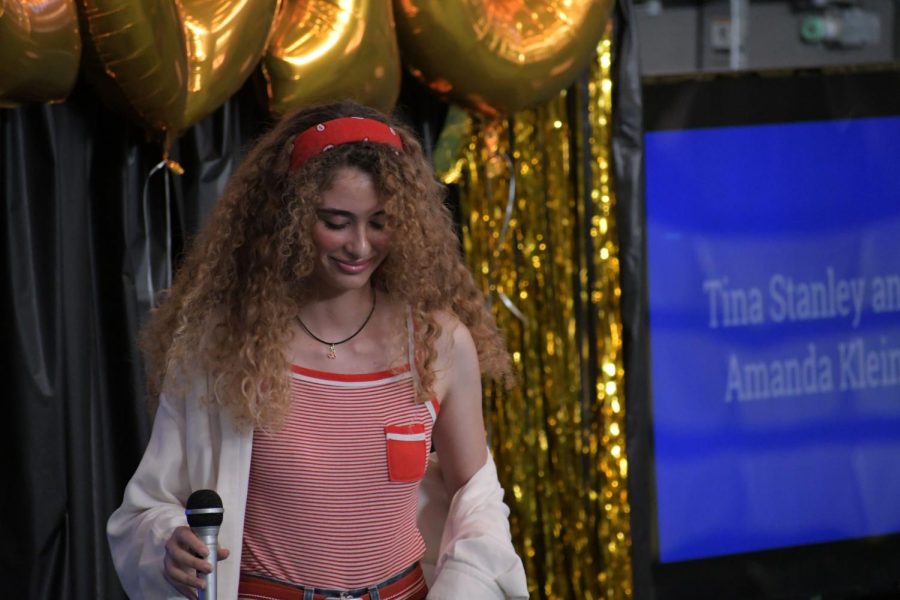 Tina Stanley departing the stage after her performance of “7 Hours Ago” with close friend, Amanda Klein, on guitar.

Many underclassmen and juniors of the like may be wondering, “What exactly is this so called Legacy Night?” Legacy Night happens to be one of the last events that the senior class as a whole is given the opportunity to spend together through a school organized function.

The evening of June 1, 2018, was filled with nostalgia as a variety of those within the senior class spoke about their past experiences involving the Sage Creek community and their hopes for the future. The first speech was vocalized by the extremely beloved math teacher, Dominic Manente. Manente’s speech gave truth to the considerable impact that the class of 2018 made on his life in the previous three years of teaching at Sage Creek High School. The speech had been extremely impactful to the audience and acted as a great lead into what would be a night full of celebration and sentimentality.

Manente, members of the senior student council, and social science teacher Allison Williams have been planning Legacy Night since the fall of this school year. Manente feels an event like senior Legacy Night adds a sense of nostalgia and community that may otherwise be lacking without it.

“I think that some other high school’s have [a Legacy Night] but I don’t know if it’s a common thing. I know that my high school didn’t have it. I would imagine that each school it is a little different so as usual we put our own little Sage Creek twist on things,” Manente stated

Paige Loeffler and Darius Rahmanian both gave extremely eloquent speeches with their own personal touch of humor. Loeffler transitioned from Manente by showcasing a satirical video about the imperative role that sunscreen plays in each individuals life.The 1997 music video, “Everybody’s Free to Wear Sunscreen” provided a light hearted scene in preparation for the sentimentality that would soon take place through her speech. Rahmanian on the other hand did something similar but with his own personal flare. Rising up the stage in a “T-pose,” Rahmanian subsequently rose the spirits of the student body within his presence before expressing a staggering heartfelt message.

Unlike the speeches, both Tina Stanley and Amanda Klein acted as the closing act with their performance of the song, “7 Hours Ago,“ with Stanley on vocals and Klein playing guitar.

Brett Paulson and Max Pedrazzani had also performed during the evening with their own personal rendition of “Best Part” with parts of the lyrics altered to better fit the Sage Creek student population. Both Paulson and Pedrazzani were unaware that they would perform until a few days prior but were thrilled to be given the opportunity to perform in front of their peers one last time.

“I feel like Legacy Night really encompasses the whole senior year experience,” Paulson expressed, “It just gets our whole four years into one small thing and it just makes us really nostalgic and sentimental.”

With all of the speeches and performances coming to a close, seniors stood from their seats to receive their final high school yearbooks in the rear of the gym. Pizza and refreshments also were supplied as seniors trifled through the memories of the past school year when filling up the bleachers in the gym or permeating the bobcat arena outside.

To all of the seniors who will be departing our campus in an extremely short period of time, I wish you all the best of luck in your endeavors. You all have certainly made an impact on the Sage Creek campus that will continue through those that will follow in your footsteps. Thank you for all of the experiences that you have given those around you, and for all of the things you did for our community.