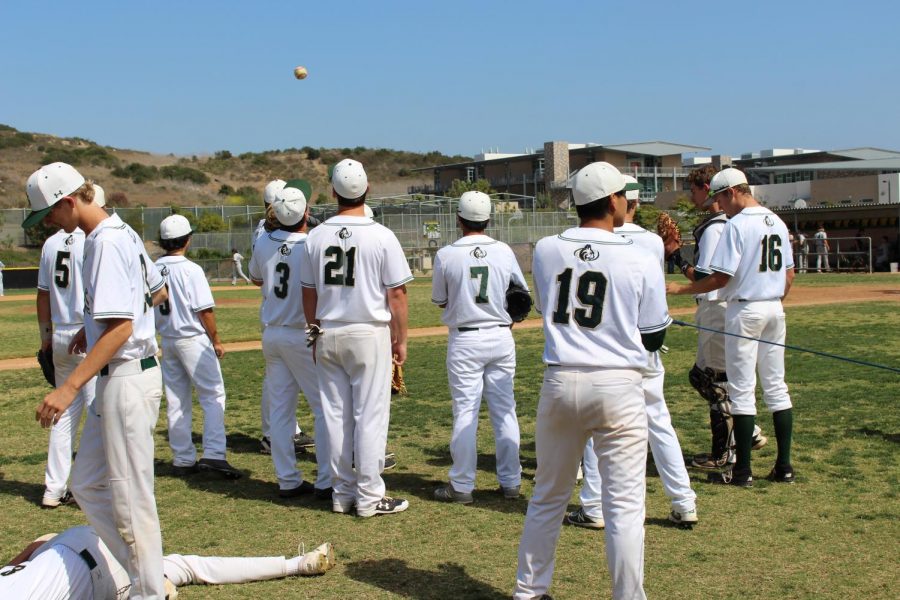 Baseball warms up to face off against their opponent in a home game at the Sage Creek field. The boys played as a team this year and said they had a fun season together.

SCHS spring athletics has come to an end. Here’s a short recap of how each team’s season concluded.

Boys golf was able to improve two spots in San Diego County, moving from the eighth to the sixth-ranked team. Junior Dylan Menante talked about their season, exclaiming, “this year I think everyone improved.” Menante also praised fellow junior, Oliver Schnitzenbaumer for his progress throughout the season. Menante also hopes to gain some new faces to the already strong team and hopes to reach that first spot in the county.

While the boys lacrosse team didn’t have the best season, they learned a lot and hope to improve next year. The Sage was able to sit down with senior Nick Miyamoto, one of the co-captains of the team, to reflect on the season. “We learned a lot about each other and improved a lot as a team,” Miyamoto said. Miyamoto is proud of how his team stuck through the good and the bad and kept getting better as a team. Next year, he wants to see his teammates carry on what he started and looks for next years captain(s) to be “strong leaders and have a positive impact on the lower classmen.” Only having a varsity team this year, he would like to see the program continuously grow and encourages anyone to join next year so they can have solid freshman, JV and varsity teams for years to come. 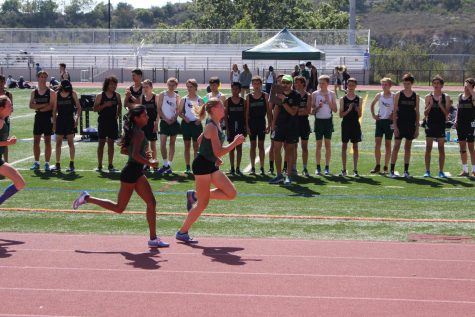 Girls track and field had another great season as they had multiple female athletes qualified for CIF competitions once again.

The Sage spoke with senior Megan Mattson about the season for the girls. “For me, I think the season went well and we’re definitely improving,” Mattson said. There are a lot of people on the track and field team, boys and girls, but that doesn’t stop them from having great chemistry as Mattson jokingly explained, “Everyone is basically friends, because we all  have these hard workouts that we do and it’s kinda like a team bonding thing as we just try and survive the workouts.” Mattson expects hard work, dedication and setting good examples from the captains next year, they will have some big shoes to fill next season.

Boys track and field had a successful season this year. All throughout the program, the boys held their own. Long distance, sprinters, hurdlers and field athletes were all able to achieve great outcomes this season. The 4×400, 3200 and 110 hurdles were key events throughout the season for the boys side of track and field. Junior Daniel Rubin believed “the boys had a great season and we had several guys vying for state.” He also proceeded to talk about field events, such as their upcoming pole vault program and already strong high jumpers, including the “beast:” senior John Walther.

Baseball was dominant at the beginning of their season starting off with six straight wins. The boys went into league with 10 wins and four losses. Playing against one of the hardest leagues in California was not favorable for the boys, but they were able to steal a win against Carlsbad in their series. They also won the series against SDA two games to one. Junior Stephen Campbell talked about how he felt regarding the season. “I felt it went really well. Have fun with the guys and learn from this year,” Campbell said. Campbell is also ready to face Sage’s new league next year in Avocado East. “We’re gonna have a really good team to showcase and I’m excited to pitch next year,” Campbell said.

Volleyball came off a state title last year, and this year was looking to do damage in open division. They had a strong season, showcasing in a tough tournament in Hawaii over spring break. The boys had an extensive run at home, finishing with eight straight wins and no losses in the Bobcat arena throughout the whole season. Overall, they were able to achieve 29 wins and nine losses. Junior Taylan Cook spoke about his first season with Sage Creek and what he’s looking forward to next year. “This season has been amazing and I’m super glad I came to Sage [Creek]. We’ve been top four in the county all year and next year will be another great year. We will have a large class of seniors and we are looking forward to another strong season,” Cook said.

This was Sage Creek’s first year with an aquatics program. It was a successful first year for the boys and girls in the water. Many of the swimmers had previous experience, and, with it being a new sport, even let some first time swimmers improve. Junior Preston Cheng talked about how the season went. “The first year was very fun. We did unexpectedly well, and the boys varsity got sixth place at CIF for the 4×100 freestyle [relay],” Cheng said. Cheng expressed his excitement for next year’s season. “Next year I am looking forward to new people and more people, and swimming faster,” Cheng said. 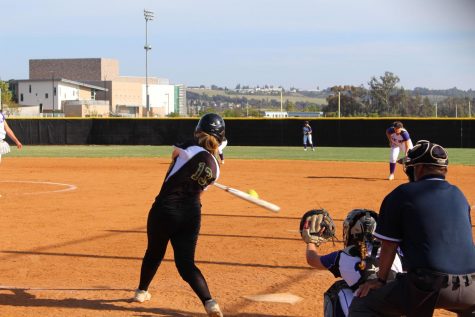 Senior Annika Lundrigan called this year “a transitional season” in an interview with The Sage. Because of brand new coaches this season, the girls had to learn how to transition from one coaching staff to another. “With the new coaching staff and new players coming on to the team, it was difficult — having a giant mix or clash of new and old coaching,” Lundrigan said. Additionally, some freshmen joined the varsity team, so one could say that it was a season of new beginnings. Lundrigan reflected on the season explaining that she believed “this was a season of growth for the program.” Lundrigan knows the program can be “built up even more” and she looks forward to what her teammates can do next year.

Competing against the best, the boys tennis team looked great this season. The Sage was able to sit down with junior Kenny Nguyen and ask him his thoughts about the season. “It was definitely a difficult season because we were playing against some of the best teams in the country. I think it was just a really great experience [for] us to learn to play against better opponents than us,” Nguyen said. As a junior, Nguyen looks to improve his hand-eye reflexes because, as he explained, “it plays a major role in deciding games.” As a team, he would like to see some more consistency in areas as such as returning balls. “We did great as a team and improving is as simple as returning one more ball back and we can pick up more wins than [this] next season,” Nguyen said.

Girls Lacrosse won four games this season. Girls Lacrosse had a “fun season,” sophomore Cierra Healy said. “The girls tried to make the best due with what we had and tried to help the seniors have the best season they could possible before they head off to college,” Healy said. Healy, like others, is hopeful for next season and hopes to not only repeat the good season but hopes to improve and be the best team they can be. “Next year I’m looking forward to getting a few more players and hopefully having a second team. I am very excited for the boys vs girls game again and hope we can have a good year,” Healy said.