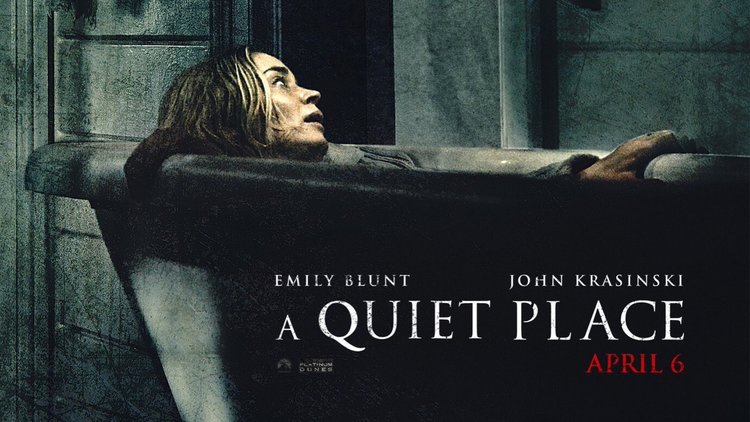 The scariest element in the world is silence.

More recently in cinema, the horror genre has been getting lots more attention and focus than in past years. Last year, the horror genre introduced audiences to films such as “Annabelle: Creation,” “IT,” and more notably “Get Out,” which went on to earn many nominations at this year’s Academy Awards. Now, John Krasinski — who is most notable for the role of Jim in “The Office” — comes to the big screen delivering his first horror film, “A Quiet Place.” The film stars Krasinski himself, Emily Blunt, Millicent Simmonds and Noah Jupe. So, how was the film? Let’s talk about it.

“A Quiet Place” follows a family of four who cannot speak or make any loud noises or else creatures will come hunt and kill them by tracking them through sound.

From the moment it starts and ends, “A Quiet Place” is an absolute thrill ride with many clever jumpscares and outstanding performances to go along with it. One of the many positives from the film is the sound design. The use of sound and silence is what drives the film forward and keeps you on the edge of your seat. It is never overplayed or underplayed. They found a perfect balance of having dead silence and using certain sounds. Also, the characters are very well established and fleshed out. We understand and can relate to what each character is feeling throughout the film. Because of that, when the creatures attack, we feel emotionally connected and thus scared for what is going to happen to them. Speaking of, the jumpscares were very well-placed and work effectively for the most part. Some were predictable and easy to see coming; but most of them worked.

Emily Blunt brought one of the best performances of the year so far. Her role is the mother of the family. Her chemistry with John Krasinski’s character was phenomenal. It works very well since they are an actual couple in real life. She brings lots of emotion and pain to her character and performance without even speaking. Her facial expressions show true terror and fear. You truly feel emotionally connected with her throughout the story.

The other standout in the film is Millicent Simmonds. She plays the daughter of the family. Her character is very adventurous and very relatable to the audience. Her performance was great as well. Because of the actress being deaf in real life, the way she communicates with the other characters feels fluent and natural. The story is surprisingly very emotional and relatable. Even though the film has its scary moments, at its core, this is a dramatic story about family and protecting ones closest to you.

In terms of what didn’t work, the ending felt a little rushed and incomplete. It’s understandable why the film ended the way it did; but it didn’t feel truly complete.

Besides that, “A Quiet Place” is one of the best films of the year so far. It delivers an immersive story, well-developed characters, and great amounts of intensity and scares. Watch this in a theater to get the best experience possible. Don’t wait for it on Blu-ray. See it as soon as possible. Let me know in the comments how you felt about the film and how it stacks up to other modern-day horror films.