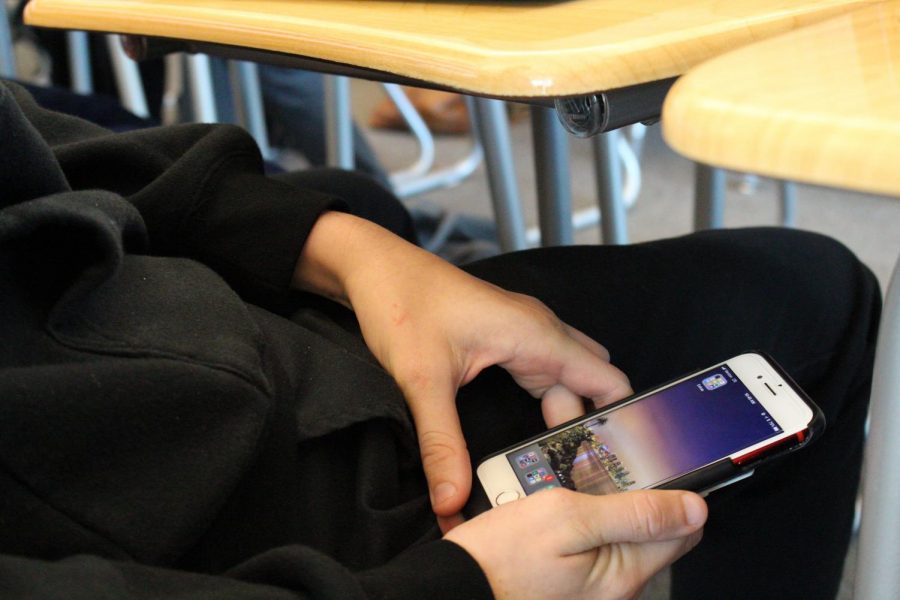 The detriments of cell phones have caused students to be distracted in class, leading to frustrated teachers and grades dropping.

Cell phones have rapidly changed the way our everyday lives appear. There’s not a second that goes by where you don’t see someone whipping out their phones to check some app or another. Never before has a generation of people been able to access such a variety and depth of information at any time. We can even contact far away friends and family or new people from different countries. However, these newfound perks don’t come free of charge. Jean Twenge, a SDSU professor of psychology, has been studying the  impacts cell phones have had for years, including their uptick in availability and usage.

This increase in smartphone usage coincides with a decrease in intimate relationships and face-to-face contact. Especially in teenagers, mental health is deteriorating, quality/quantity of sleep is all but a myth of days past, and depression runs rampant in young populations.

Gone are the days of leaving early in the morning and getting back when the streetlights turn on. Now we prefer to seek companionship through a five-inch screen. Keeping up our snapstreaks has become a life or death situation as we are taking more care with those than with our friendships. Our lives have been irrevocably changed for the worse. Three out of every four high schoolers have an iPhone, and the effects are felt regardless of their class, race or where they live. More and more sources are finding that the smartphone’s biggest effect is on our happiness and social lives. 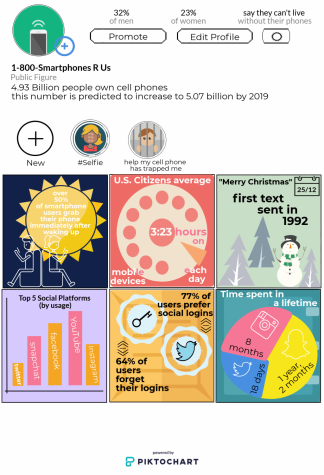 People bail on plans in favor of staying at home to binge watch the latest episode of the hit “Netflix” show; I’m just as guilty of this as anyone. Many of us would prefer the solace of our rooms and technology to going out. Seniors and eighth-graders have never had comparable social outings in the past. Before 2010, the historical low for seniors was 2.69 social outings per week, for 8th graders, their historical high was 2.5 per week. Before 2010, the numbers never crossed, with seniors even at their low points surpassing their younger counterparts. The steep drop began in 2007, in all groups admittedly. While this could be interpreted as an increase in college competition or social responsibility over the years, it does line up with widespread smartphone ownership. It may not be a causation, but there is a correlation. The decrease in active social lives is undoubtedly a shift for the worse. Humans are designed for social interaction, with the negative impacts ranging from depression to stunted mental growth. Maybe if the quality of conversation was getting better, the decrease in quantity could be negated, but sadly this just isn’t true. In my personal experience, there isn’t a day that goes by where in the middle of a conversation I don’t see someone whip out their phone, or I do the same thing myself. You can not to expect to listen to someone well and have meaningful interactions if your attention is constantly divided, and mostly dominated by the little box in our pockets.

Social media has gutted the communal aspects from our lives: our blood runs cold at the thought of talking to someone we don’t know. We isolate ourselves into specific friend groups and then further remove interaction. Our generation sees each other, outside of school,  40 percent less often than previous generations. While yes, our drinking, mortality and pregnancy rates are down, we lack so many of various other experiences, specifically those experiences you can only get from being in a group of friends. Like those dumb jokes and mistakes that everyone makes, that can form a person.

Beyond a social life in tatters, our mental state is worst than ever for this age group. Our mental maturity is far behind that of generations before us. Childhood extends well into high school, 18 year olds act more like 15 year olds and 15 year olds act more like 13 year olds. We see this in the longer waits to get a license, there’s less hurry to get out of the house and to college. Adolescence begins far later but lasts for a very small period of time.

With our stunted mental growth, we become more unhappy. There is a negative correlation between screen time and happiness: the more time we spend on a screen, the less happy we are. The same correlation is present for other behaviors: the more time spent on non-screen activities, the happier we are. Admittedly, this is not a 100 percent unshakeable fact; it could be that unhappy teens spend more time on their screens than their happy counterparts. In 2011, our suicide rate was higher than our homicide rates. And this has only gotten worse, the disparity between the rates continues to increase. In 2014, 8.7 deaths per 100,000 were caused by suicide and 6.6 per 100,000 were homicides. A lower homicide rate means teens aren’t interacting as often, even negatively. The increase in suicide indicates a either a failure to notice suicidal tendencies, or treat said tendencies.  We have been calling attention to suicide in teens for years, well before 2014, yet they continue to increase. The rates were even on the decrease before 2007, not to say that smartphones were the direct causation for this increase, there is certainly a correlation. Smartphone ownership has done nothing but increase since 2007, as well as suicides in teens. There may be other factors that have increased these suicide rates, such as an increase in bullying online, but the increase in bullying, especially cyberbullying could be blamed on increased smartphone usage. It can become circular quickly, or do smartphones bear the entire blame. A subject like suicide and depression in teens is far too nuanced to blame it completely on one factor, it could be an increased access to the deteriorating state of our world, but the generations before us sat through the Vietnam War and didn’t seem to be struggling as much as we are. Cell phones have definitely taken a toll on our mental health for the worse.

Despite all the outward effort, it seems to be failing or not connecting with our generation. There hasn’t been a sign of slowing. We kill each other less, but at this point it may be better to disconnect and have more negative interactions. It’s hard to tell which is better in this situation, but it is indicative of a dire correlation. Smartphone use does increase rates of depression as consecutive hours of screen time go up and, as depression rates go up, so do suicide rates. There may be no concrete causation but an undeniable relationship. The situation is only going to get worse, as of 2015, 73 percent of teens own a smartphone. More steps need to be taken, not legislatively, but by parents and teens themselves. For the older members of our generation, we need to take steps of self preservation and force ourselves to get off the screens. For younger kids, parents need to step in and put limits on usage to begin creating healthy use habits. Like anything in life, it needs to be used in moderation.

Beyond our common depression and destroyed social lives, the prevalence of smartphones has negatively altered our sleep schedules. For many of us, phones are the first thing we see when we wake up and the last thing we see when we go to sleep. Even if we wanted to look at something different in the morning, we rely on our phones to wake up. Beyond this, phone usage throughout the day and night might have a negative impact on our sleep duration. The longer the screen time the more likely it is that the user has shorter sleep duration and worse sleep duration. Sleep deprivation doesn’t only result to exhaustion, but also increased rates of depression, illness, weight gain, blood pressure and anxiety. Our already high depression rates are then doubled by our sleep deprivation.

Not to say that smartphones are the harbingers of doom for our generation, or even accelerating our destruction, but they offer a lot of negatives, and a lot of positives. There is no one simple answer to the impact they have and should have in our lives. If we hope to reverse the ever increasing trends of our age groups, we do need to cut down on screen time, from all sources.