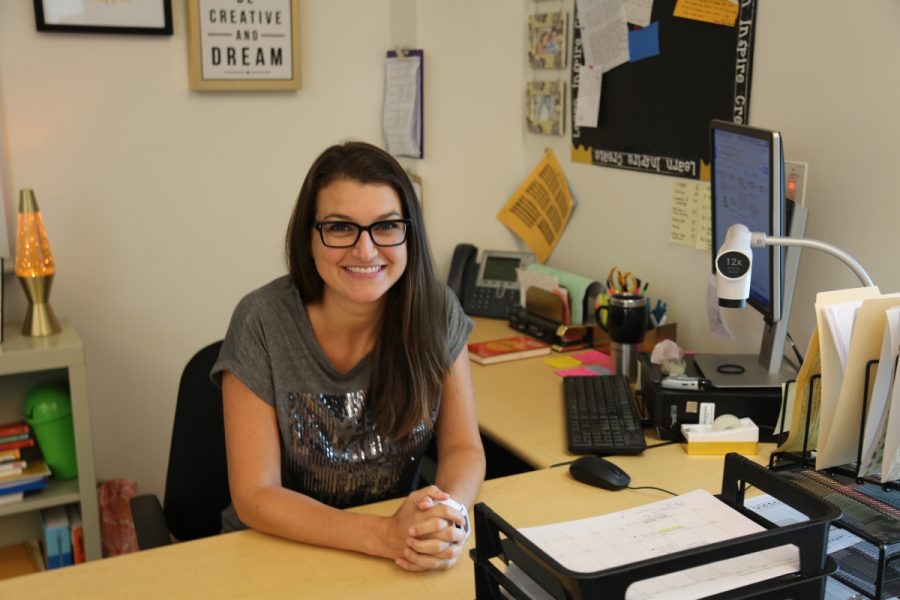 Ms. Hunter at her new desk in her first very own classroom

“Never give up.” “Do something amazing.” “Always believe that something wonderful is about to happen.” One teacher dangles these quotes around her room and sticks them to the inside of her doors for students to read when they exit her room. For her freshmen and senior students, these quotes are just typical pieces of decoration in another teacher’s classroom, but for Ms. Sarah Hunter, these quotes are what drive her and give her the vigor to achieve her dreams at teaching at her dream high school.

Hunter, who is one of the new additions to the English Department, was a musical theatre teacher in San Diego county before her journey to Sage Creek. She enrolled at CSU San Marcos and earned a teaching credential for English and Social Science. Hunter’s primary goal upon graduating was to teach high school and she immediately began student teaching at Carlsbad High School and Vista High School while putting in applications for full-time teaching positions in multiple districts. San Marcos, Escondido, Fallbrook, and Carlsbad were all on her list for districts she desired to teach for. Her job search lead her to a job fair in San Diego where she was interviewed on the spot and offered a position in the San Diego Unified School District. Although she was pleased with the job offer, she declined because she was aiming to teach in a district closer to her area.

Not long after, Hunter was offered a tour of Sage Creek in April of 2015 by SCHS Dance and P.E. teacher Katie Chrisman, a friend she has known since middle school. She was introduced to Corrie Myers, the English department chair, and Principal Cesar Morales and after that day, she was instantly hooked and fell in love with Sage Creek. The following day, she sat in on an English class and soon interviewed for the job. In her interview she reiterated multiple times that she “knew [she] wanted to work here,” and that she believed she “belong[ed] at Sage,” to express how important of a goal teaching at Sage was. At this time though, she was having an inner conflict between her heart (which was telling her to wait and try to earn a job at Sage Creek) and her mind (that told her to try and grab the first job opportunity that sprung up).

Hunter waited for her pending applications to gather some opportunities after her Sage tour, but she still hoped for a response from her dream campus. Her problem was that Carlsbad wasn’t hiring until later that year while all the other surrounding districts were at that time. So when she received a teaching offer from San Marcos, she ignored her heart and accepted the offer. She reluctantly sent an email to Myers of her decision, despite her heart’s screams that Sage was where she was supposed to be. Even her colleagues from CSU San Marcos told her to “keep pressing on to teach at Sage.” Additionally, her life mentor emphasized that she should “decline San Marcos and call Sage back.” This situation gave Hunter another internal struggle and she again questioned if she made the right decision. After two days of thought, the time came to meet with the principal of San Marcos Middle School. Ms. Hunter took this with positivism and readily toured the school’s campus. News broke that she would not have her own classroom and would be jumping around in rotation in other teachers’ classrooms and this signaled to her that this was not what she intended for herself.

On the drive home, Hunter knew that if it was meant to be, someone at Sage would call her, and at that moment, (Hunter says, “This is the universe.”), Myers called and left a rather “awkward” voicemail stating that if she is still wanted to teach at Sage, that the opportunity was on the table. She called Myers back after 20 minutes and was offered to come in for an interview and that same afternoon, she was officially offered the teaching position
Hunter concluded the conversation with a quote that runs deep for anyone in a life struggle: “It all just aligns itself.” After that moment she has never looked back. This is now Hunter’s first year teaching at Sage Creek. She runs the newly created Choir Club and is also the musical director for the upcoming theatre production Bye Bye Birdie. Dreams are achieved through perseverance and patience, this is especially the case for the teacher in room 2300.