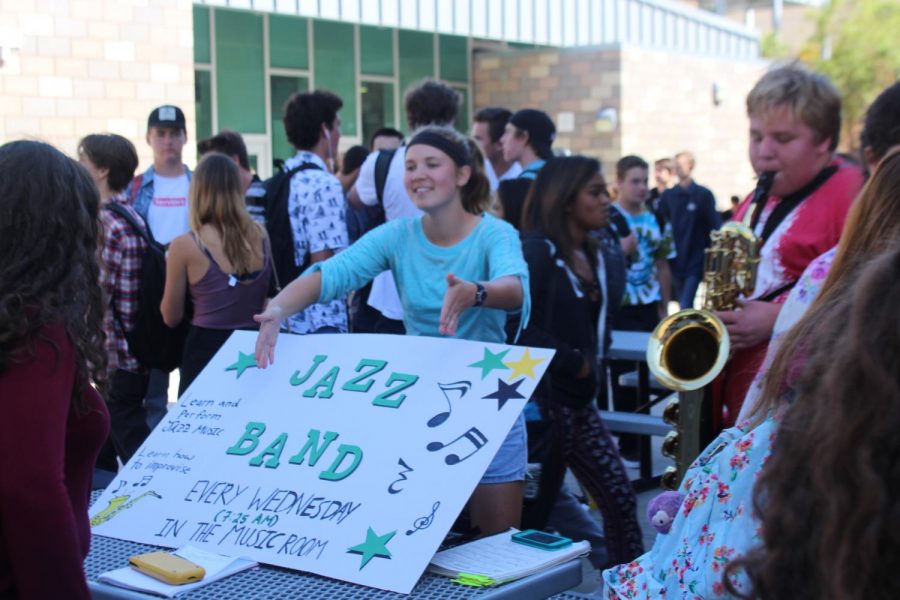 Seventy-seven clubs were showcased at Club Rush on Wednesday, Oct. 4, in the academic mall during advisory and lunch.
Club Rush gave students the opportunity to learn information about clubs and gave clubs the opportunity to gain new members. There are many clubs students can choose to be part of, ranging in subject from robotics to photography to guitar-playing. Clubs can enhance a student’s high school experience, allowing them to connect with people who have similar interests and pursue things they are passionate about.

ASB Advisor Danny Kung further detailed the goals of the event from the perspective of clubs and also confirmed the large number of clubs that participated in Club Rush this year.

“Club Rush is an opportunity for student-interest clubs to: One, showcase what they are all about and two, to entice other students to become members of their club,” said Kung, “This year we had over 70 clubs.”
Key Club President Jade Huynh hoped the event would lead more students to join the volunteer organization. She was pleased by the turnout.
”I’m the president of Key Club, so, in order to raise awareness about Key Club, I thought it would be a good idea to attend club rush,” said Huynh, “I had a lot of people come to our booth area, there were a lot of underclassmen who asked questions, … it was good.”

Club Rush also offered clubs the opportunity to spread the word on what their club’s purpose is.

“You Just Got Served” is the new ice cream club on campus, and co-president senior Emily Kvitek shared her hopes to inform students about the club.
“Olivia and I chose to be a part of club rush so we could spread word of our new club, ‘You Just Got Served.’ The intentions of our club is to make and sell homemade ice cream at Sage Creek events like basketball games, flag football tournaments, whatever it is, and all the proceeds go to Sage Creek dances and the senior class,” said Kvitek, “We were expecting a lot of people to sign up because who doesn’t like ice cream?”
Senior Megan Radzinski is the president of the Photography Club. She chose to be a part of club rush in order to give her club some recognition. She was surprised by the turnout, gaining more members than expected.

“I wanted to get my club out there, I wanted it to be an actual club,”  Radzinski said, “A lot of people signed up.”

Because Club Rush was located in the Academic Mall, it caused a lot of crowding between the 1000 building and the 2000 building. Choosing to have Club Rush in this area allowed clubs to get the most attention possible during lunch. Senior Cameron Bickerstaff mentioned that he attended club rush because it blocked the path to the cafeteria and all of his friends were there.

“My lunch is that way, and I kind of have to go through here and then I’m not going to go sit at a table alone,” Bickerstaff said.

“There is a lot of people and it blocks my way, so I kind of had to stay here,” French said, “Key Club [stood out to me], it’s a really solid club, really stuck out, really good advertising.”

Many students attended club rush to find clubs that related to their interests, and for sophomore Tara Stanley, this means ping pong and venturing.

“I attended club rush to see the kind of clubs our school had to offer,” Stanley said, “Ping Pong Club and Venture Club stood out to me.”

The clubs that stood out to students depended on what students found interest in. Sophomore J.D. Michael’s interest was found in surf club, ski and snowboard club, and ice cream club.

“Skiing Club, Surf Team Club and the Ice Cream Club [stood out the most to me],” Michael said.

Senior Hansle Goh came to Club Rush to check out some of the new clubs and found his attention being focused on photography club.

“I wanted to see what clubs there were, there were new ones as well I wanted to look at,” Goh said, “I like the photography club because I have a special interest in photography.”

Sophomore Chris Mou came to Club Rush to join a club he had already heard about.

Student counselor Catherine Di Benedetto mentioned the relevance of clubs in relation to colleges. She explains how colleges get another aspect of who a student is by seeing what clubs they are involved in.

“Colleges look very favorably at [club involvement], it’s another element to add on to your applications because they provide a holistic review of the student,” Di Benedetto said, “It’s just another way to get another side and glimpse into the student’s life.”

Di Benedetto gives students the advice to stick to the clubs they join.

“It’s better to be in one or two clubs from ninth-grade all the way through to senior year, than bounce around from club to club because it shows them dedication, commitment and tells them a little bit about your character, as well as giving back to the community,” Di Benedetto said.

The opportunity for exposure allowed clubs to find lots of new members and, as a result, many students were able to become more involved in the school’s community.