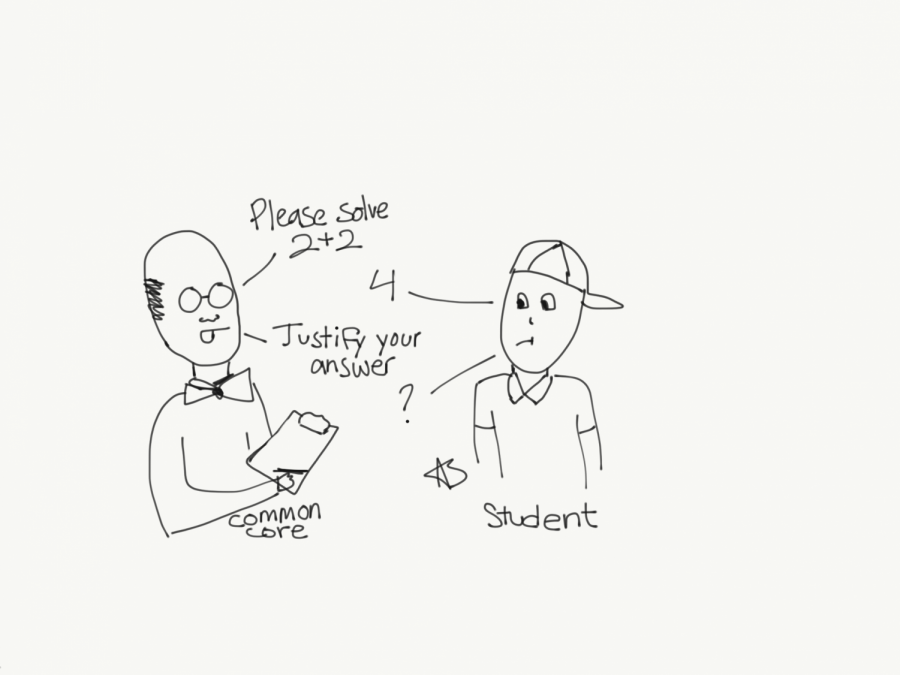 Common Core is a set of high-quality academic standards in mathematics and English language arts/literacy (ELA). These learning goals outline what a student should know and accomplish at the end of each grade.

This is the basic definition of Common Core according to its main web page. It was the subject of great debate during these past couple years while the Classes of 2017, 2018, and 2019 were making their way through middle and high school. It used to be everywhere: news, social media, and articles.

But now, we hear nothing.

This is most likely due to the fact that California is one of 40 states that has formally adopted the Common Core standards into its system.** Common Core’s  impact has not yet hit the Class of 2018 and 2019 due to the fact that higher-level curriculum such as Advanced Placement courses and other classes in general have not adopted these learning goals for English or math.

However, Common Core has unfortunately skewed lower-level math classes, leading to many “intermediate-level” classes that take up precious credits and learning opportunities. Courses that were taught in middle school like algebra 1 are now being pushed up to high school level, and this is not for the better.

This is not to say that the original Sage Creek system was good either. Teaching geometry and physics to freshmen did not seem like a good idea in the eyes of students. A year after that, even more renovations came when physics was removed and offered as a higher level course with biology and chemistry taking its place.

It is commonplace in other high schools and even other districts to have varying curriculum in California as long as it follows the A-G requirements. Unfortunately, this variance of curriculum has elicited many issues which Common Core promised to recompense.  It was going to provide a unified education system to gauge everyone around the United States and “build a better workforce.” Common Core eventually gained heavy criticism for not accounting for the fact that a general system could not root out inherent problems in many school districts  that exist within inner city and poorer communities.

To gain a better perspective on how Common Core is taught in the classroom, math teacher Domenic Manente proposed what he thought about Common Core.

“What Common Core has done has just given us different ways to present the material… It’s not that just all of a sudden there are new mathematics, they are the same general concepts,  except we present it in a different way,” Manenete said.

The argument for many students is that we all don’t need to know every step of the quadratic equation or the super specifics of what makes a Unit Circle worth memorizing.

To a teacher, the effect of Common Core on the classroom is another factor that plays in with its implementation.

“Common Core has affected my classes. The biggest way I see it is the student’s mindset, they already see all the negative stuff out there. Other math teachers even say, ‘Yeah I am not gonna do it,’ so there is this negative mindset I see in my peers (not at Sage Creek), my children, students, etc. I already feel like mathematics is already about having a positive mindset. It has to give incentive and a positive tone. So when you already have the negative of ‘I am not good at math and Common Core sucks,’ now we have an extra hurdle to overcome, but I believe we can do it.” Manente said.

This perspective brings to the table a view of modern day American education, Which might not be in the best of places right now. According to a study by the Brookings Institute, American school children have three times the amount of homework other nations have . This is probably due to the over-complicated system Common Core provides when it comes to teaching the most basic aspects of Math and English. Why does 2+2=4 have to be written out in a paragraph form? Even when we took some practice tests all those years ago, what was the reason we needed to know every intricacy of each little problem?

It does not grant students incentive to just learn the basics and if there is anything that needs incentive, it’s doing school work. If a student takes a College Prep (CP) class, they do not need to know the intricacies of how to derive a quadratic formula to fully grasp on how solutions work completely. Students also do not need an already difficult program to become even more of a challenge, and this is why Common Core should not act as a universal binding.

Common Core, however despised as it may be, has well-mannered intentions. By no means did the group of people developing Common Core mean to ruin students’ lives. This new system was meant to create a standard means of developing a stronger workforce. No doubt these intentions lay on deaf ears, and actions speak louder than words.

A solution is to have Common Core be a general set of curriculum that can be provided to teachers if necessary, meanwhile states can continue to have their own education standards and adhere to the basic fundamental tests Common Core may provide. So it still is the job of the State to have a curriculum that provides enough knowledge to take these tests and also allows for poorer communities to develop their educational staff and capabilities.

Whether we like it or not, Common Core is already being heavily implemented in almost every state through every shape and form. It is up to the United States Government Board of Education to work out the kinks in Common Core and it takes students to work hard and adapt to the new sets of changes in the curriculum that Common Core might bring. If anything, it is the determination of the students that will help rebuild and reshape the American education system.