Federal Government should try to have little involvement in business, other than to regulate the economy and prevent monopoly, and education should be left to the states, but with federal streamlining of the curriculum. 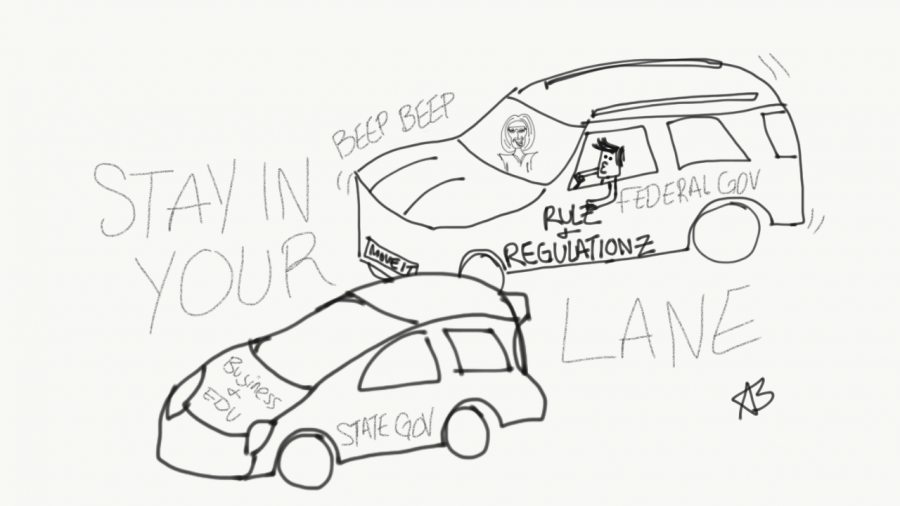 In the founding of our country, American Revolutionaries – some of whom our citizens still love and revere, such as Alexander Hamilton and Thomas Jefferson – clashed in the papers, the courtrooms, and the Constitutional Convention, over the level to which the Federal Government should have control. The controversy resided in deciding between a strong central power and giving individual states more power. This debate continues today, as it pertains to our society’s business and education.

The Federal Government should set expectations and guidelines to which the states must adhere to and then interpret into whatever they like, so long as they follow the guidelines.

Teachers commented on what their stance was.

“I believe it’s important that, regardless of what state that you’re in, that you receive some type of education; that it’s across the board the same, especially if you’re going to a college that is in a different state. We want you to be able to feel equally as prepared for college,” social science teacher, Allison Williams asserted.

She continued to maintain that there is a strong need for state-to-state regulations on education, but the federal government should streamline certain aspects of education systems across the states in order to maintain unity without uniformity.

Senior Jake Nipper gave his stance on the matter.

“Each state, if left to their own devices, could vary. One state could have a very high standard of education with a very high high school and college graduation rate, while other states could have issues with non-education, people dropping out, literacy rates going down, and we don’t want that, so I believe that there should be a national standard,” Nipper said.

Vice principal Bill Lord gave a great summary on how he believes that Federal and State Governments should interact.

“I think the Federal Government should provide an overall outline, roadmap, framework for the states as far as expectations, as far as a standardized curriculum and benchmarks.

He continued to assert his concern regarding education without the checks and balances that the federal government provides on the issue.

“I would be wary of some states deciding on what to teach and what not to teach if there was no federal oversight,” Lord stated.

There are hundreds of factors that play into the formation of a unified, standardized curriculum. There is potential for a lack of unity on behalf of state legislature in deciding what should be included in their curriculum.

“Imagine if all fifty states decided which sciences are most important?” Lord posed.

With national science standards, school boards should go to the teachers themselves and ask how they interpret these teaching standards. This allows for an overall unification of curriculum throughout the states and, therefore, our country as a whole.

It seemed imperative to ask the faculty their opinion, regarding whether or not the federal government be involved in the maintenance, regulation, and progression of business as opposed to leaving companies to their own devices in a “laissez faire-esque” style.

“There’s a degree to which the federal government can regulate the economy and help as need be. But primarily I would say that laissez-faire and full-on capitalism should be encouraged,” Peterson offered.

When discussing the issue with Williams, she asserted that businesses cannot do whatever they please, as there are human costs to it.

She exemplified her statement by connecting it to her U.S. history teaching of the Industrial Revolution. Companies that were free to do whatever they pleased tended to set unfair and unrealistic working conditions for the employees.

Without federal government in the picture, companies have no standards to go off of; for what is “fair” for the workers. When given the power to, business owners, selfishly instill unfair working conditions and hours with little to no pay and overwhelming fatigue. Therefore, the central government should step up and involve itself, or else change towards a society encompassing fair labor laws will never come to fruition.

Our country is the largest importer on the planet, and it sources its goods from countries  that allow factories to impose child labor and intensive work hours. They are countries that have the same horrible working conditions that we employed in our past history, such as in China, where they continue to put children in horrible working conditions. The long hours and intense manual labor is grueling and horrific in comparison with standards laid down by fair labor laws enacted by our Federal Government. In a sense, the problem of unfair working conditions still plagues our country, even if it doesn’t take place in our country itself.

Our federal government made strides in the past to streamline our education, as well as to provide schooling for as many American youths as possible. This attempt is evident in the ¨No Child Left Behind Act,¨ which supported ¨standards-based education reform¨ with the idea in mind that by establishing high standards and setting attainable  goals, there could be an improvement of individual success per student in education. The Act also required states to develop assessments in basic skills, stating that federal funding will be withheld unless the assessments were given to students at all grade levels.

There are laws that are instilled by the Federal Government in order to prevent unfair working conditions, as well as to prevent monopolies and unfair trade practices.

In the end, the synthesis of both Federal and State Government involvement in education and business will allow for the best solution to regulation and control.

“I think that there should be some government involvement, ideally an equal balance of the two, but in general, [as far as education goes] it is, and should continue to be, left up to the state government.” Government teacher Thomas Blomquist said.

Bloomquist asserted the vital need for a balance between State Governments’ responsibilities with matters such as education and business.

“I think there’s a place for federal law, and in a lot of cases, it supersedes state law, which I think is a good thing, otherwise you’d have states doing whatever they want whenever they want to. With that being said, I believe that states should have a right to instill their own laws, so long as it lines up with the guidelines of Federal Government,” he added.

When both central and regional governments work in harmony, American society progresses. The protection of liberty can prevail; the original intention of our forefathers laid in place hundreds of years ago, in the establishment on our country will continue to succeed into the ongoing future.