Bulldogs Have A New Member For the Pack 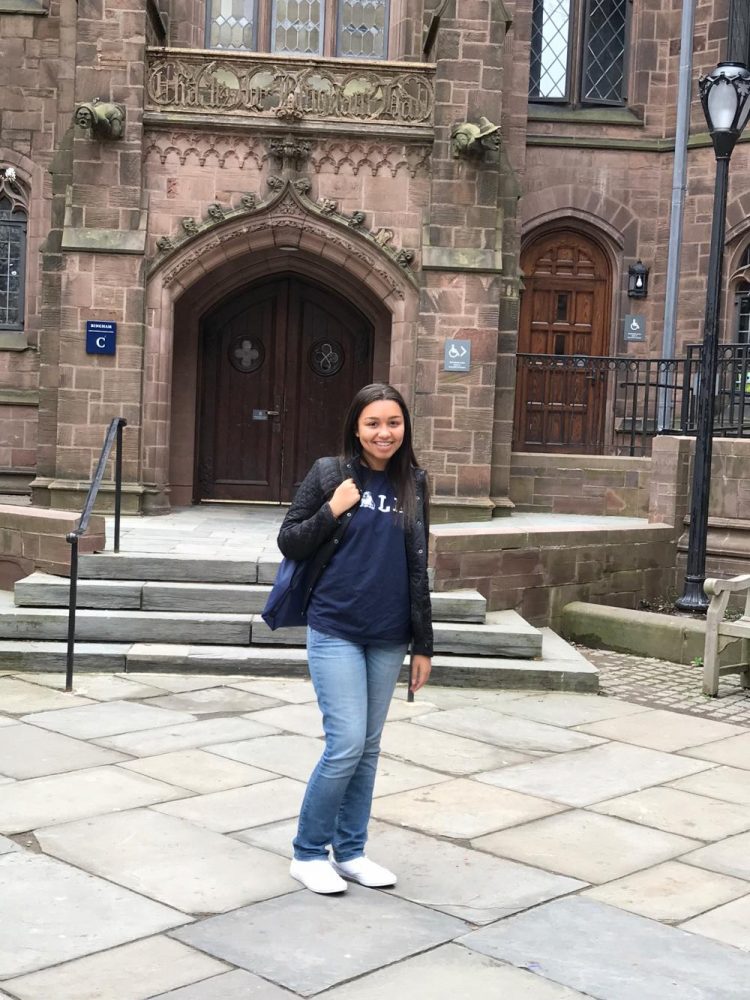 Elyse is pictured in a blue Yale pull over outside one of her future school’s buildings. Photo Credit: Elyse VanderWoude

With laughter and passion in every step, Elyse VanderWoude gets ready to embark on her newest journey of attending Yale in the Fall.

VanderWoude will be in the first graduating class of Sage Creek high school. Since a young age she has been counting down the days until she could take the needed steps to completing her goals.

“The college application process was pretty stressful. I actually was always really interested in college, so I started looking when I was pretty young like fifth grade. I started taking the S.A.T. in Junior year, so I was lucky in that I finished doing all my standardized testing during Junior year. [Therefore] I at least didn’t have to deal with that [Senior] year,” VanderWoude explained, “It’s always the decision of setting exactly where you’re going to apply and meeting all your deadlines. I think a lot of the applications opened August 1st. I said I was going to start August 1st, but I started probably late October, so that was an experience. Then there’s also the question of if you’re going to apply early anywhere, so that was definitely interesting.”

Even though some parts of the application process may have been tedious, VanderWoude didn’t have one doubt when applying to her dream school.

“I ended up [applying to] Yale earlier, so I sent that one in November first and I found out in December. I wasn’t expecting to get in at all. It had been my first choice since I was 10 years old, so it was really crazy. It was the first school I visited, and the first school I applied to.” VanderWoude emphasized. “It was really cool to get that acceptance, but it’s definitely difficult, but you feel a great sense of relief when it’s over.”

In college, VanderWoude will be pursuing her love for history and medicine in hopes of going to medical school, and following a path toward surgery.

“I plan on majoring in the history of science medicine and public health. Basically that’s kind of what it sounds like. It’s courses about the history of science medicine and public health. I want to go into medicine but I’ve always really loved history, it’s my favorite subject, and you don’t often get a combination of those two disciplines,” VanderWoude beamed, “[Therefore] I thought it was a really interesting option, and it was also one of the reasons that I picked Yale because I have not found any other schools with that program.”

On her path to discovering her area of study, VanderWoude was an avid student in the BioMed program.

“I definitely think [the BioMed pathway]  gives a window into the field that you would not otherwise get into later. I thought it  was really cool that some of the things we got to do are things that a lot of people don’t get to do until the collegiate level. We also had the opportunity to hear a lot of people in the medical profession speak. It was really nice to learn more about what it’s really like to be a doctor, a nurse, or what it’s really like to be ABC or D. So that was really great to ask those questions, and also each year you get to learn something different,” VanderWoude continued, “One year is more anatomy and physiology and other years more learning about diseases, so you really get a very interesting look into a lot. I thought it was really great to have before going into college.”

Through her journey in the Biomed program, BioMed teacher, Valerie Park, has been with her from beginning to end.

“She really puts her all into all of the work she turns in and she’s very reliable. I think the fact that Elyse has taken all four years of the biomedical sciences pathway shows her dedication,” Park praised.

Along with Park, a close friend Maisha Zaman, a senior, has been by her side day in and day out.

“Elyse loves the biomedical sciences, we’ve been partners before doing projects in biomed, and she puts in a lot of effort,” Zaman gushed, “Being partners with her makes the class more memorable and better.”

After the application process VanderWoude’s waiting game had her thinking she would have rejection in her near future, but all that soon changed.

“I knew that the decisions were coming out at 2:00 p.m. on December 15. I am not a person with testing and the whole thing… I never check right away because I always put it off, and am always scared to see. So I decided that I wasn’t going to check until Friday because it was the Thursday before Winter break. I said, ‘I’m not going to check. It’s going to ruin my last day at school. I don’t I don’t want the bad news, I know I’m going to get rejected.’ Then I wasn’t feeling well that day– I was feeling horrible, and that night it was 10 p.m. and I was like you know whatever, let’s just do it it’s going to be rejection,” VanderWoude expressed,” So I open the login portal and I have to click on this link. I click on the link and the screen goes black, and I’m like what is going on. Then all of a sudden this video of these dancing bulldog’s– their mascot is the bulldogs– and their fight song starts playing  on the screen, and it flashes ‘Yale class of 2021’. My mom and I started screaming and then we started contacting family, but it was just amazing. For like two weeks I kept having to go back to the video because I was in denial that it actually happened, but it was surreal.”

As VanderWoude leaves Sage Creek she has some new found wisdom that helped her through her application process she hopes to share with others.

“I would definitely say work hard, but I think that a lot of misconception a lot of people have is they think ‘oh I have to be in 10000 different clubs [and] I have to do you know all these things’. What I’ve heard the college admissions people say is really you know do something that you love to do, and do it well. That is really what they want to see. They want to see that you’re committed to something, and that you take it to another level. But really it’s just something that you love doing,” VanderWoude advises, “Of course you know you want to work hard in your academics, but I do think that doing something that you really enjoy, and just staying motivated. It’s hard to do that it is four years– it’s a long time– but try to stay on track.”

For VanderWoude, her passion was jazz, her love for singing, and volunteering.

“ I really liked volunteering, so I volunteered at the hospital, but  for my genius project I decided to do a volunteering project,” VanderWoude explained, “I really love jazz music, so I said ‘What can I do with this?’ I decided to go to senior centers and sing jazz.”

Along with her passion for volunteering, VanderWoude became the founder of Sage Creek’s Model United Nations club in 2014.

“When I was in ninth grade I was actually at a different school, and they had a Model UN club there. While I was there I wanted to join, but because I found out about it too late in the year, I couldn’t,” VanderWoude emphasized, “But when I transferred [to Sage Creek] in Sophomore year we didn’t have one. I thought ‘I’m really interested in international relations. I love this kind of things, so why not start a club here.’ So I just took that and I started a club.”

At Model UN meetings you simulate the United Nations.

“Basically during meetings we’ll pick a topic of controversy, and each person is assigned to a country and they are a delegate for that country,” VanderWoude explains, “They represent their country’s position on the issue, and then you have a debate. At the end the goal is as well as is the goal of the United Nations to find a resolution that works for everybody.”

Overall, as VanderWoude departs from high school she hopes to leave a legacy of the passion and drive she has within her.

“I just think of myself as an average person that just has goals and works hard,” VanderWoude concluded.