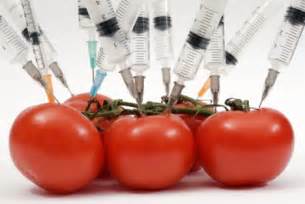 Genetically modified organisms, commonly known as GMOs, are foods that have been genetically engineered in a lab, essentially making them not found in nature. The main reasons behind creating GMOs are to grow foods more efficiently and to control growing activity. However, GMOs continue to be a controversial topic because people don’t often know whether they are good or bad for you. In my opinion, they should be entirely avoided.

GMOs can be found largely in soy and sugar, and all corn and bananas are genetically modified.  The majority of people believe that GMOs are bad for you, and try to avoid eating them. In a survey from YouGov.com conducted in 2013, 44 percent of people were not sure about the safety of GMO consumption. Personally, I would agree with that 44 percent, as they have a reason to be unsure.

First of all, all GMO products in American grocery stores are not even labeled. To me, this seems a little suspicious. Why would labels not be included? This appears as if there is something about these foods that the food industry not does want their customers to know. With such little information about the health risks of GMOS, one thing is certain; there are pesticides used in these products, causing an exposure to pesticides if consuming. People could potentially be harming themselves, due to improper labeling. I believe people should try to stay clear of eating GMO products, but I’m sure minimal intake of them might be okay. Although, 26 countries have banned GMOs completely, so clearly, this is a problem.

Obviously, there is something suspicious about GMO foods, because why else would they be banned in numerous places? Something seems to be telling me that GMOs are probably not great for you, and shoppers might want to stay away.

What is known is that genetically modified foods do include amounts of pesticides. This is another clear reason to be against consuming GMOs. The best way to avoid this problem altogether is to buy organic food. That way, if eating these products are as harmful as many fear, you can avoid the issue entirely.

However, it could be easily argued that GMOs are harmless, and that despite the unknown ingredients, the health risks do not seem to be fatal. Nonetheless, I would fear to venture into the unknown. If something could be unknowingly hurting my health or doing nothing at all, I would much rather just not mess with it. Maybe eating these foods is completely harmless, but there is no way for us to know the full truth about these products. Although purchasing foods organically is rather expensive, and not everyone is willing to do this, the people who are incredibly bothered by GMOs don’t have many other options. If you are willing to pay higher prices for healthier food, then your health will probably benefit more from this.

Until more information about GMO food is discovered, the best way to ensure your health is to stop purchasing GMOs. The food industries will continue producing GMOs if consumers keep buying them, which will become a larger problem if they truly are unsafe. Companies should be giving the public more information about GMOs, so they can form their own opinions. What appears to be the problem for me, is the lack of information.

This inadequate amount of information is the primary factor that alerts my radar about GMO foods. Food industries do not give proper information because they do not want their buyers to know the truth; if they did, they would no longer be buyers.