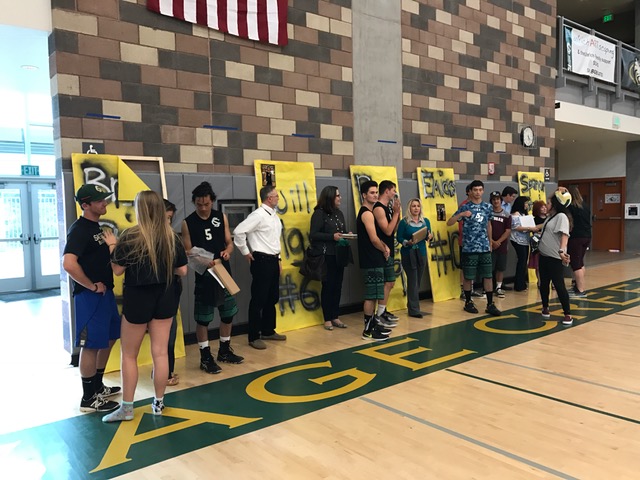 Seniors: Bryant Phan, Ethan Mickelson, Will May, Ryan Yates and Spencer Stein are honored on their senior night against Fallbrook.

On April 27, the Sage Creek Bobcats looked to extend their five game winning streak against the Fallbrook Warriors. This day will be memorable not only for the team, but also for the JV and freshman as they watch their seniors on their special night.

The Bobcats began the first set by going on a 6-0 run in part by junior outside hitter Christian Janke’s four aces, and senior outside hitter Ryan Yates’ kill. At the 10-1 mark, sophomore opposite Ethan Shoemaker got a solid block and kill. Later, Yates got a massive “go set” for a crafty kill. Then, junior setter Christian Griego set a nice “one” to lead sophomore middle Jon Ulrich to hit a perfect spike down to make the bench jump onto their feet.

Following that, senior opposite Bryant ‘starpower’ Phan got a 10 foot line kill to shock and energize the crowd. Yates got his third kill on attacking the line, and senior outside hitter/defensive specialist Will May got an overpass kill. To end the set, Griego lead a 5-0 run to win 25-7.

The second started with a 2-3 deficit for the Bobcats, as Griego set senior middle Ethan Mickelson for two kills. With the Cats making hitting errors, the deficit continued at 10-8. Then, a spark went off inside Janke who lead the charge with eight straight aces to get the lead. With the second set nearly secure, May closed it out with the final kill to win it 25-14.

The third set saw a lot of errors by the Bobcats, which made them trail by three. As the Bobcats corrected their mistakes, they tied the game at 9-9, and proceeded to rally with kills and aces by Yates to lead by three. However, the Cats struggled again, even after coach David Savage’s two timeouts. They managed to keep the game within two, however, the Warriors came out with the win after getting two outside hitter kills to take the set 25-22.

The fourth set began at the 5-2 mark with Edwards leading a 4-0 serving run with Yates kills following. The Bobcats went to Janke, Phan and Yates for another 4-0 run. And to close out the game, Griego looked to set Janke and Yates, while having great defensive plays for the win.