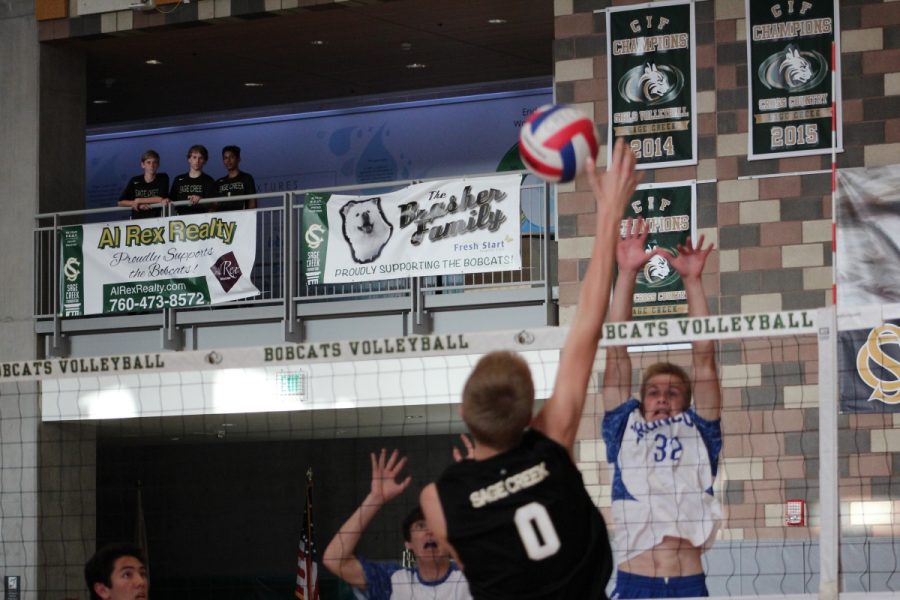 Sophomore opposite Evan Marks goes for a kill in the third set.

About two weeks ago, the Sage Creek boys volleyball team went to Las Vegas for a tournament over spring break. The tournament resulted with the team coming back and going on a two game winning streak. Senior outside hitter Ryan Yates mentioned that “the tournament really helped [them] as a team.”

“We are definitely looking to play a similar game to what we played against the highly ranked Vegas teams. We are here to showcase how we have adapted and learned from that experience,” Yates said.

On April 18’s game, the boys looked to extend that margin against Rancho Bernardo in a clash of the outside hitters. The boys sought to use the knowledge that they have learned to try and get the win against the Broncos.

“In my personal opinion, talking and communicating on the floor is the most important thing. If we communicate with our passers and setter[s] we will be able to get this win,” Yates said.

During the first set, the Bobcats came out with six consecutive sets to Yates for two kills.

However, the Bobcats’ bad blocking on the right side lead to a big opening for four Broncos kills. Later in the set, sophomore Braden Brasher skyed up for a “one” set by junior setter Christian Griego for two kills which lead the Bobcats on a 4-0 run. Griego continued the momentum as he got an ace at the 10-6 mark, leading to a Broncos timeout. With three consecutive errors by Yates, Griego looked to set junior outside hitter Christian Janke, who got a kill after spiking the ball directly at the defensive specialist’s chest.\

However, with overpasses by the Bobcats, the Bronco hitters got numerous kills to tie the score at 14-14. Griego again looked to Janke for three kills and a fantastic behind the head hit for senior middle Ethan Mickelson to keep the ball in play for a 20-20 tie for the Cats. Also, a filthy dump by Griego gave the cats a 22-21 lead as freshman libero Matthew Oakley hit a terrific diving pancake pass. Then, sophomore middle Jon Ulrich finalized the set with an overpass kill which lead the Bobcats to a 25-22 win.

The second set began with the Bobcats rallying at a score of 5-4, as they got a mix of kills by Ulrich, Yates, and Janke. Ulrich smashed a roaring kill that he described as “amazing.”

“I thought the kill brought some energy back that rallied us throughout this game,” Ulrich said.

In addition, Janke got a 10 footer kill, which forced the Broncos to call a TO at the 8-4 mark.

“I owe all the credit to my setter Griego. His set was perfect,” Janke said.

More diving pancakes by sophomore defensive specialist and setter Garrett Edwards, and a great Brasher kill carried the team further into the second set. Ulrich smashed another block helping Sc go on a 10-4 run. The Bobcats looked to Janke and Brasher, as Janke bounced another ball on the ten foot line. The set finished with Janke getting an ace, and the Broncos missing their serve, ending the set 25-18.

The third set started with great passing by the Bobcats, which lead to good kills to keep them in the game after net violations at the 6-6 mark. With kills by Janke and Brasher, the Bobcats took the lead at the 10-9 mark. With another crafty dump by Griego and good passing by Oakley, the Bobcats thrived with a 3-0 run. However, with consecutive missed serves by the Bobcats, the Broncos stayed in the game. This lead to a “killing spree” by sophomore opposite Evan Marks and Janke. The Bobcats subbed in senior opposite Bryant Phan and senior defensive specialist Will May, as May passed very well and Phan had good blocking to lead the Bobcats to take the final set 25-20.

“There was great hitting, amazing blocking, and a few ¨bounces¨ in there as well. Definitely a great win,” Oakley said.