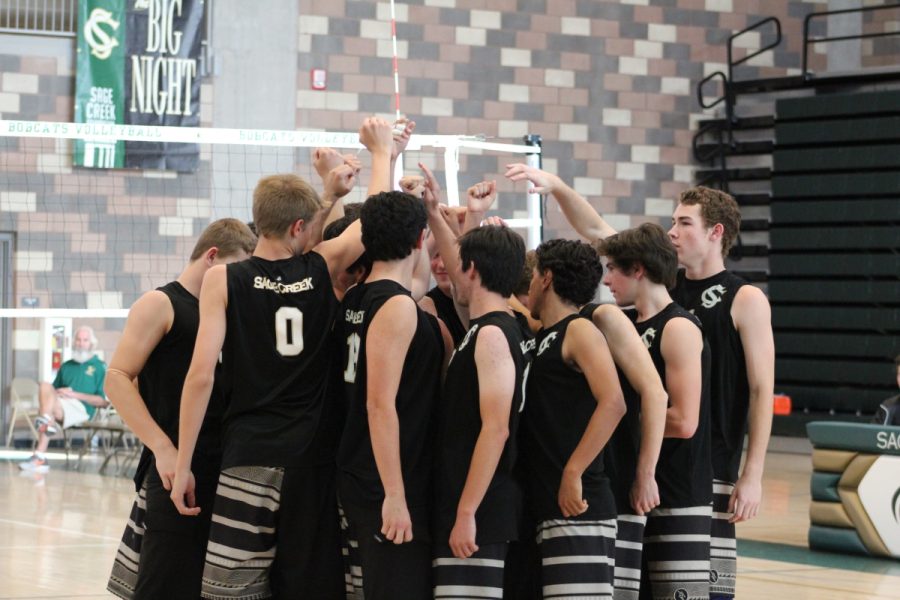 Sage Creek Bobcats huddle for a pump up from senior Will May (middle of group) before the match.

After taking down Mt. Carmel last Tuesday, the team looked to keep the momentum going into last Thursday’s battle against the La Costa Canyon Mavericks.

Going into the start of the game against LCC, Assistant Coach Audrey Palomares mentioned what it is like to play against a team like the Mavericks.

“I knew that they were going to be a really solid team and it would be great competition for our boys. They have great hitters and so do we. It should be a good battle,” Palomares said.

The first set exploded with two aces by junior and outside hitter Christian Janke, and a good set by freshman libero Matthew Oakley to outside senior Ryan Yates. In the next following points, junior opposite Ethan Shoemaker got stuffed by LCC who then took the momentum for a 5-0 run. This lead Coach David Savage to call a timeout with the Mavericks ahead 15-10.

“We just have to be ready for their hitters. We have to move our feet and always have our platform ready for a roll-shot and a hit,” Yates mentioned about the timeout.

After the timeout, Janke came out with a crafty angle shot to the corner. However, the Bobcats passing really struggled and Coach Savage took another timeout with the team trailing 19-12.

The first play after the timeout started off with a great rally between the two teams that lead to an energizing kill by sophomore middle Jon Ulrich.

With the LCC outside hitters overwhelming the Bobcats with hitting combos, the Mavericks eventually took the set 25-17.

Going into the second set, the Bobcats looked to take momentum with two sets going to Janke as one almost went into the rafters for the two points. Shoemaker then blocked the outside hitter which he described as a “hopeful momentum swinger.”

On the next couple of plays, LCC got a couple of kills causing Savage to call another timeout as the Mavericks lead 11-7. Following the break, one of LCC’s better servers did a jump serve to Oakley which, resulted in an overpass. An LCC outside hitter then tried to get the best of a set, but was denied by Griego. Within the next couple of points, Shoemaker and Ulrich got kills to energize the crowd. However, as the Bobcats trailed by three, a couple of aces lead the Mavericks to win set two, 25-19.

The third set started off with Janke and Ulrich getting a couple of kills as SC still struggled to pass and block. Shoemaker lead the Bobcats to a 2-0 run through great communication on hitting and passing. Unfortunately for the Bobcats, the Mavericks then rampaged on a 8-1 run featuring all sorts of fundamental errors by the Bobcats.

A great pass by Oakley lead to a Janke kill which ended the LCC run. As a few more LCC hitters scored on the following plays, senior Bryant Phan replaced Griego at setter, ending the junior’s frustrating night.

“It felt good. I was a little worried since I have not set in a while. It felt nice being in the game,” Phan described.

Phan lead the Bobcats on a 3-0 run, but LCC ended the final set with a kill. The Mavericks took the set 25-16. Following the final set, Shoemaker spoke up about what the team as a whole will look to improve upon for the following weeks to come.

“We just have to work out some kinks like passing and blocking. Also, communication. We have to talk a lot more with each other about the plays, covering, blocking, and passing,” Shoemaker said.

The Bobcats will be playing the SDA Mustangs on March 27 as they look to rebound with a win in their next game.