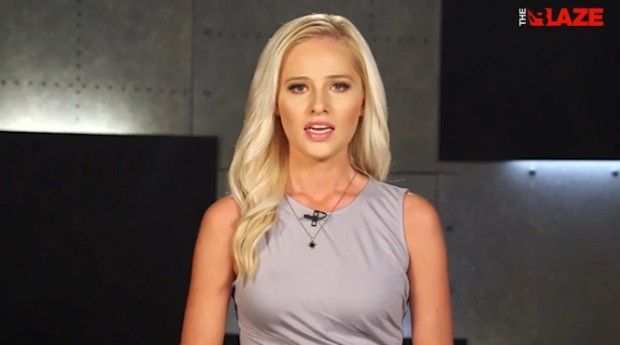 Tomi Lahren delivers a powerful message during her segment “Final thoughts” on The Blaze.

Breaking News: if you share your personal views that your boss doesn’t agree with, you could be suspended.

Following an appearance on “The View,” where she revealed a pro-choice stance on abortion, Tomi Lahren was wrongfully suspended for a week from her show on The Blaze.

“I can’t sit here and be a hypocrite and say I’m for limited government but I think the government should decide what women do with their bodies,” Lahren said in the interview.

For those unaware of Lahren´s background, she is a 24-year-old conservative television host currently residing in Dallas. After graduating from the University of Las Vegas, she began working with OAN network in San Diego and later signed with The Blaze in November of 2015. Since then, she has gained a steady following of supporters (myself included) and haters from her videos on feminism, the Black Lives Matter movement, and the left’s politics on her segment of “Final Thoughts.”

While I’m not always in favor of her political standpoints, this recent news of her suspension has angered me. As a journalist, I want to know that I can freely speak my piece and not have excessive and arbitrary restrictions chaining me down.

In a segment on his TV program on Monday, the former Fox News representative and CEO of The Blaze, Glenn Beck, explained that he tries “to hire people who have a different opinion because [he] believe[s] in being intellectually rigorous. [He also wants] people to make a real argument on the other side so we can learn from each other and grow.”

What Beck mentioned Monday is something that I look forward to doing in helping to hire the next editorial board of The Sage. I know that my opinions and perspectives are not the only ones prevalent among my applicants, and I fully intend to respect the political perspectives from all of those who apply. To do this, however, I need to be able to speak freely and allow them to do the same. Unfortunately for Lahren, Beck does not think the same way.

Beck issued this message on his radio show, which was then published in an article from The Daily Caller.

Lahren had a different opinion than Beck. Lahren made her argument on the other side of his (and conservatives’) view. So why is it that Beck doesn’t want to “learn” and “grow” from an opposing viewpoint? All of a sudden, free speech is restricted.

Another point going against Lahren from her conversation on “The View,” is her assertion that to be a conservative and be against abortion is hypocritical- the hypocrisy of course is allowing government involvement. Yet, by supporting pro-choice, Lahren would be in favor of enabling the government to still have some degree of control in the matter. Regardless of this minor fallacy, Lahren is entitled to her beliefs and should not be punished for them.

For the record, this is not the first time that Beck and Lahren have butted heads on beliefs. Beck even said himself that, “It’s no secret [he and Lahren] don’t agree on quite a lot.” Despite frequent disagreements, Beck trying to pass this ordeal off as punishment for “intellectual dishonesty” is ridiculous.

The CEO claims Lahren has flip-flopped her stance on abortion and, therefore, he felt the need to make a point in suspending her. To his defense, Lahren has spoken in the past about abortion- specifically by calling abortions “baby killers.”

Let’s be clear about one fact before addressing the true context of her speech itself. Getting an abortion means that a mother is deliberately terminating her pregnancy; it is killing a baby. Naturally, Beck made sure to publish a clip of her expressing this in a harsh tone, but the key detail that he did not release was the actual context of Lahren’s message.

Lahren was reprimanding Lena Dunham, a feminist who was publicly expressing her wish to have an abortion. Whether Lahren is pro-choice or not, she had the right to feel disturbed by having to listen to a woman openly express her wish to terminate the life of her baby. So this “intellectual dishonesty” claim of Beck’s is completely false.

One aspect of this controversy that I am interested in is the terms and conditions clause of employee contracts for The Blaze. Although the specific conditions of Lahren’s contract are not of public record, it is difficult to believe that a professional news organization would include a clause about not sharing political and personal views on other networks.

Had Lahren misrepresented The Blaze by expressing derogatory opinions or slandering co-workers and their beliefs, then I could see grounds for suspension or termination. But seeing how this was not the case and she simply shared her opinions when asked for them, Lahren did nothing wrong.

Essentially, this assault on Lahren’s freedom of speech should alarm all of us. If our opinions become censored by our superiors in the workforce, how can cooperation or diversity exist?

Beck’s decision to suspend Lahren unlocks the gate and opens it for further disputes. If the head of a news organization punishes a reporter for respectfully giving an opposing opinion, someone needs to call that head on the carpet. When censorship occurs within the media, those who watch the news will never get the full scope of a story or even hear one at all. Actions like these can tarnish reputations.

Thus far, Lahren has remained calm and professional. She has also not spoken out inappropriately about this suspension in any way, shape, or form. When she returns from suspension next week, I expect matters to be business as usual. While Lahren will bounce back, the memory of this unrightful act will be stamped on her timeline forever.

“I will always stand up for free speech & welcome the conversation, even if I disagree with it. Disagreeing and silencing are very different,” Lahren tweeted.