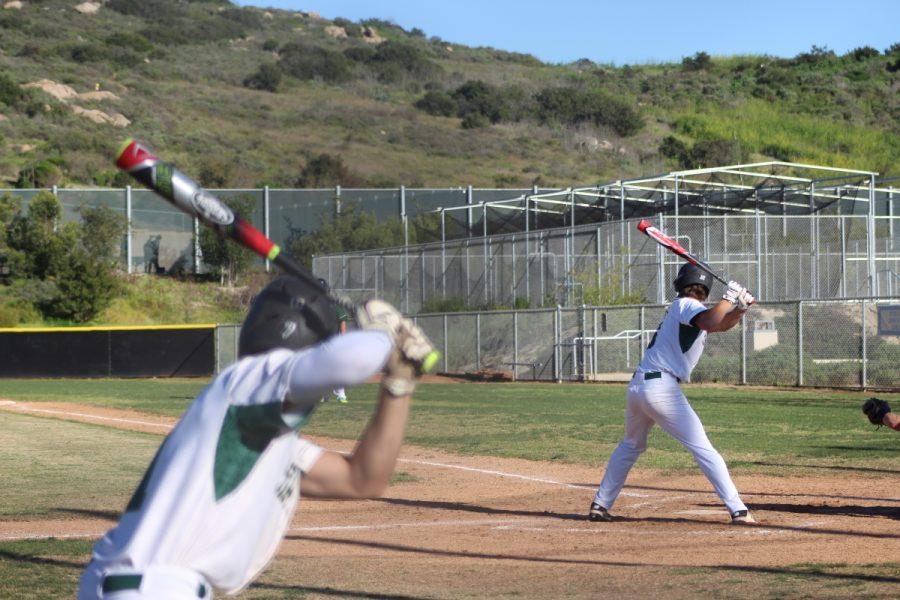 #7 senior Ryan Torres on deck preparing his swing for when he takes the plate.

The Bobcats came out first inning letting two runs and only getting on base once. By the second and third inning, Sage Creek upped their fielding skills by allowing no runs in both innings, but were opposed in fielding skill by not scoring either inning. With Mission Hills up to bat in the top of the fourth, #7 connected with the ball, driving it between second and first and passed the left fielder leading to the first score for the Grizzlies. The Bobcats approached the bottom of the fourth with a three run deficit, but they refused to give up.

By the bottom of the fifth, #16 senior Patrick Huston was able to hit in #5 junior Zach Thurman, but it didn’t stop there. #17 senior Drake Benner fired a line drive double over the shortstop scoring #3 sophomore Scott Anderson and #27 senior Tanner Blough to tie up the game at 3-3. Sage Creek had only flourished late in the game, but it began to pay off for them.

In the top of the sixth, #8 senior David Rudolph served the reliever roll as #10 senior Jonathan Molina retired with three runs scored against him. Mission Hills countered the pitching change by bunting numerous time which put runners on base. This soon led to another hit for #7 to take the game to a score of 3-4 going into the seventh inning with Sage Creek’s turn to answer.

Sage Creek continued to refuse to give up in their first home game. The Grizzlies fought hard and the Bobcats fought back, in a defining moment of the game, shortstop #3 sophomore Scott Anderson, filling in for #6 Sam “Wez” who injured his hamstring in a previous game,  was going to make a double pay which required the first baseman to be away from his base. David Rudolph, who ran to cover first as Scott Anderson fired the ball at him, was unable to make the catch as he fell to the ground which let

the runner, #19, on third to score making it a 3-5 game. Bottom of the seventh, with Sage Creek in a deficit of 2 runs, #3 sophomore Scott Anderson drives the ball between second and first base to grant Sage Creek and RBI #16 senior Patrick Huston.

Once again, Sage Creek showed that they would not give up even in the later innings. To tie it up again, #17 senior Drake Benner connects with the ball to bring #27 senior Tanner Blough home, giving Benner his third RBI of the game.

The game was once again tied, with both teams sitting at 5 runs. Due to lack of lights, the ballgame had to be brought to an anticlimactic ending where the game ended as a tie after the 8th inning. Both teams were robbed of a proper ending to their hard fought battle. Both teams showed ferocity throughout the game with little sign of ever giving up. Through all innings, the two teams were loud and energized no matter the situation, especially in such a close game.

Coach Ryan Madsen gave his thoughts about the game and the lights situation, regarding it as “unfortunate” but also stating that most high schools don’t have lights for games closer to the winter where the sun goes down earlier than usual.

Coach Madsen expressed his views on the game and his team stating that, “A great thing about this team [Sage Creek] is their ability to never give up.”

This clearly showed that their spirit is not easily broken when odds are stacked against them.

#17 senior Drake Benner shared his thoughts about not receiving a proper ending to their first home game.

“I thought we had the chance to finish it in the seventh. Ending it in a tie isn’t what we wanted but it’s better than losing.”