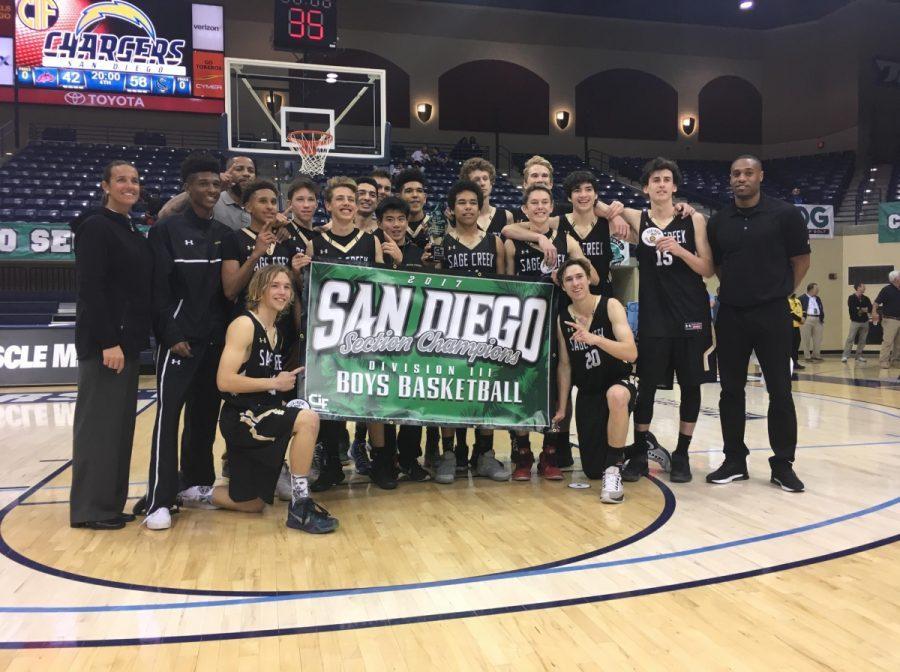 Under the bright lights and colossal scoreboard of the University of San Diego gymnasium, the 10 seed Bobcats fought for the Division Three CIF basketball championship.

On Saturday, Sage Creek’s varsity basketball team took down Mount Miguel 58-42 despite being below them and the rest of their opponents on the CIF playoff rankings. Thankfully, by the final buzzer, the only thing above Sage Creek was a crystal CIF championship trophy.

“The experience of the game wasn’t really about playing on USD’s court or being on the campus; the experience was the stage and the stakes themselves,” senior Tyler Franchimone said.

Despite the championship match being so far away from their home court, many SC students and staff drove out to cheer their boys on in, what would be for many, their final CIF game.

“Battling for the championship and competing in front of the people we love was incredible, and [it’s] something I’ll always look back on,” Franchimone stated.

Another senior, center Teiyler Scott, also described his satisfaction with looking up at the green and gold throughout the entire playoffs and in the championship game.

“It was amazing to have the fan base there. For everyone to come out to make the mission down the freeway to the college was amazing,” Scott expressed.

Not only was this championship game unique for the fact that it was the final CIF match, it was also special because of the rankings of both teams. There were 16 teams in the CIF playoffs (1 being the highest ranked and 16 being the lowest ranked) and both the Matadors and Bobcats were below the middle of the pack at the start of playoffs.

“We can be the 10 seed on paper, but it doesn’t mean anything. In all of our heads and through all of our eyes, we came into every game to win. Being the 10 seed kept a chip on our shoulder and we continued to fight until the final buzzer,” Scott said.

Mt. Miguel may have had ample experience with bulls like University City (No. 8 seed), Coronado (No. 1 seed), and Point Loma (No. 4 seed); however, these Matadors were helpless against the Bobcats.

“The confidence for us started against Christian [HS]- the beginning of playoffs. It seemed that we had full control from that point on. It was our championship to win and winning it all seemed destined for us,” Franchimone remarked.

Throughout the contest, the Bobcats held a significant lead and maintained a dominant offense in all four quarters. The team shot 63 percent from the floor, while holding Mt. Miguel to only 27.8 percent. Leading the team in scoring was senior Bryce Buscher who put up 16 points and grabbed 8 rebounds in the team’s dominating victory.

“My teammates are the whole reason that I am able to score. They help space the floor, create openings, and X is always able to find me. The guys set hard screens and get me open down low. I just do the easy work,” Buscher said.

Buscher wasn’t the only factor guiding the Bobcats in the win, however. Senior and co-captain Xavier Allison tallied 13 points and dished out 13 assists on the offensive side of the court.

“Our boys know their spots and they got to those spots. When we’re moving on the offense, everything opens up and it makes it easy for me to get into the lane. I’d draw another defender and just give [my teammates] the ball to finish,” Allison stated.

The senior squad was especially emotional because this was their final CIF match before officially handing the ball to the underclassmen. Even though the team still has state playoffs left, the seniors know that their journey is almost over. Allison reflected on his younger guard, freshman Jailen Nelson, who he has had the ability to guide this year.

“I feel very confident in Jailen’s abilities, and he will help improve the program for the rest of the years that he is here,” Allison said.

The senior point guard further described how he has mentored and guided Nelson along the way.

“I’ve helped him with his leadership and his emotions on the court this season. While he needs to improve his voice (being louder) and keeping his emotions under control, he will help [the future] follow and trust him as a leader,” Allison commented.

Another key player this year, sophomore Nick Sonck, has also had mentoring that dramatically impacted his mindset and friendship with Teiyler Scott.

“I told [Nick] at the end of the regular season that I would give him a different way of fighting. I was super chill before the playoffs, but I decided to be super aggressive in practice and try to get into his head. Eventually, he got stronger from it,” Scott remarked.

After the game, the senior center pulled Sonck aside for another heart to heart conversation.

“Nick told me that he appreciated me being always being there for him. He told me that I was the best mentor he could have had, and that the rough talks during practice helped him succeed during the game,” Scott said.

While the team will lose eight seniors next year, the Bobcats will confidently rely on the experience of Sonck and Nelson to carry on the winning tradition. Before the entire season comes to a close, however, the team will have to battle in state playoffs.

On Wednesday, Sage Creek will travel to take on Twentynine Palms at 7 p.m. The Wildcats are 27-3 this year and will certainly put up a fight. Seeing as SC has managed to dominate higher ranked teams already though, it’s way too early to count them out.