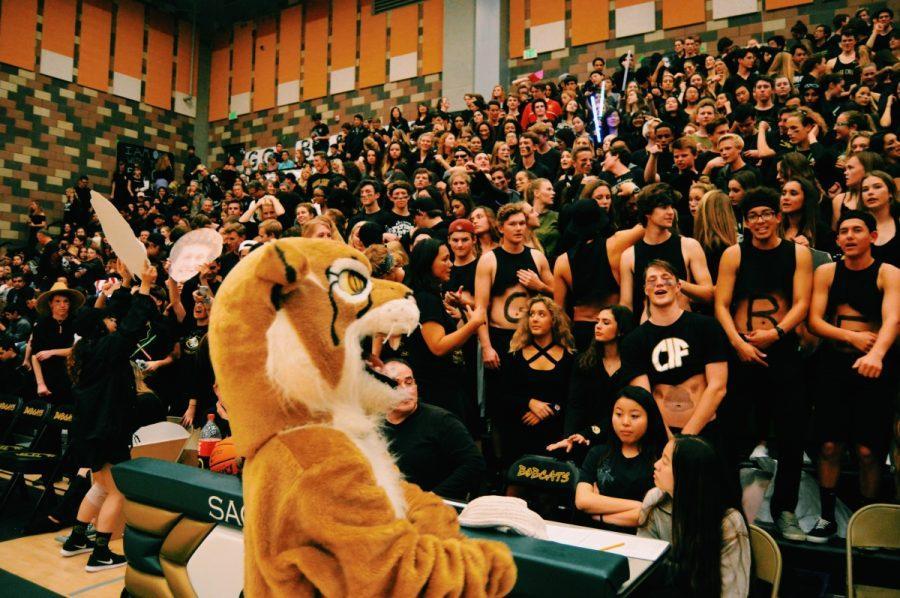 Bobbie looking into the crowd filled with students rooting for the basketball team.

Within the last week of play, the varsity squad has been thriving in the CIF playoffs. The Bobcats took down the Christian High Patriots 54-40 on February 22 and this past Saturday, they defeated the Granite Hills Eagles 72-60.

Between these two games, the Bobcats shot 50.5 percent from the floor while collectively hitting 70.5 percent of their free throws. Their 72 points was the second highest team total all season long and will hopefully propel them into another win against Montgomery High School tomorrow at 7 p.m.

Montgomery has also dominated opponents in their first two games of CIF playoffs. The Aztecs soared above Rancho Buena Vista with a 73-64 overtime victory on February 22, and then took down the Carlsbad Lancers 56-52 on Feb 25.

As evident from the table below, MHS has not released statistics for their road victory against the Lancers, so delivering a complete team comparison (between SC and MHS) is more difficult here. However, during their home win against RBV, the Aztecs shot only 36 percent from the floor and sunk 85 percent of their foul shots.

Going into tomorrow’s game, here are four key players who have been leading the way for both teams during the CIF playoffs:

The winner of this game will go on to compete against the winner of Point Loma v. Mount Miguel on March 4 at 11 a.m.