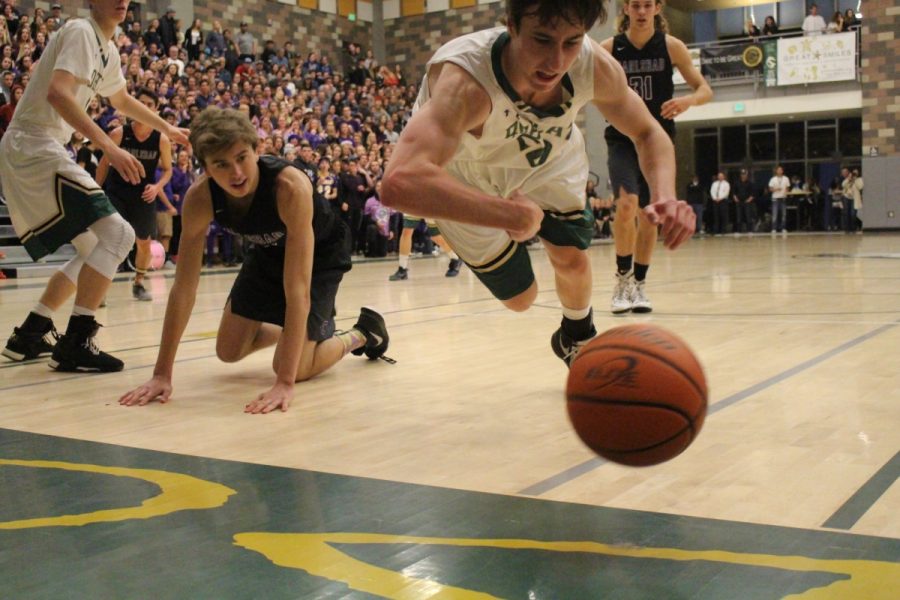 Senior forward Bryce Buscher dives for a loose ball late in the fourth quarter against CHS.

On Friday February 17, the Sage Creek Bobcats battled their hometown rival, the Carlsbad Lancers, in their last game before CIF playoffs. This game was the final home match for many senior varsity players and as senior Bryce Buscher put it, “This game meant more than anything.”

Before the game, senior varsity players were welcomed by their parents and were congratulated by faculty, friends, and coaches. After all the seniors received applause, their parents joined in to wish them good luck in the senior night battle.

“I really felt a part of the Carlsbad community and having my parents with me and be a part of it made it even more special. It was so amazing the way it was set up and very well organized,” Uhl said.

Like CHS, Sage Creek is in the midst of the “Battle of the Fans” competition that is hosted by KUSI Sports annually. The criteria for this competition includes positive sportsmanship, student body participation, school spirit originality of cheers, organization of the group, and student section leadership.

According to KUSI, the timeline for CIF SDS judging was from February 7 to February 17. On Feb 17, fan voting on KUSI PPR social media began and will continue until February 24. On Feb 24, the official Battle of the fans II winner announcement will be on KUSI-News All Sports Report at 10:45 p.m.

“I am honestly very proud of our school and all the participation we’ve gotten! We had so many people at our biggest game of the year and it was something I’d say was absolutely beautiful. And it isn’t just the one type of person out there either, it’s every social group coming out to support Sage Creek, but more importantly, our classmates and peers as they play in their basketball game,” Cudal said.

At the start of the first quarter, senior center Teiyler Scott won the jump ball. Sage Creek began relatively slow on offense as Scott was blocked four times, however, they were hustling to the ball and playing tight defense.

At the three minute mark in the first quarter, Scott got a huge momentum-swinging block that sparked offensive swagger for the Bobcats. Senior point guard Xavier Allison used a euro-step move to make a crafty layup, while also dishing out a dime to Scott for a open mid-range jumper. The opening quarter ended with 12-14 CHS lead, and lots of applause from both student sections.

The second quarter had the Lancers joust out to a 8-0 run as coach Brandon Dowdy quickly called a timeout. Following the timeout, Allison knocked down a contested three point jumper and senior forward Dylan Rossi stole the ball which led to him hitting one of two foul shots at the line.

The Bobcats’ offense started clicking on all cylinders as they used fast breaks to draw fouls and began to move to the ball around. In three consecutive possessions, Allison made a classy finger roll, Scott made an acrobatic layup, and sophomore center Nick Sonck got an offensive rebound with a put back layup to bring the Bobcats down by three with a score of 25-22 at the half.

“As a team, we were executing plays well and getting into the paint. That is one of our team’s strong points,” junior guard Brett Crawford said.

Aside from the deficit at the half, this competitive cross-town rivalry game was surrounded with controversy once the third quarter began. In the second half, three of Carlsbad High School’s handmade “K” signs- which are brought to every game- were placed next to each other.

Bobsquad’s Cudal also gave her thoughts on what transpired and how proud she was of the Bobcat community.

“When we saw the KKK signs, everyone was surprised and very offended. I could hear the disgust in people’s voices as they yelled at the other side to take them down. After, when they realized they were in the wrong, they tried to defend what they were saying. No matter what the “K”‘s were for, the result was [that] there were three and [they] were lined up next to each other. [It] can’t be an accident when you only make three posters instead of maybe two or four,” Cudal said.

Following the game, an email was sent out by principals of both Sage Creek and CHS addressing the incident.

Sage Creek High School’s principal, Cesar Morales, wrote, “Dr. Porter, CHS principal, has been investigating the incident throughout the day. At the conclusion of [Morales’] e-mail is a communication Dr. Porter sent to the CHS community this afternoon.”

In his letter (which was enclosed in Principal Morales’ email) CHS principal, Dr. Porter, responded to CHS students and parents.

“There was an incident during the Sage Creek vs CHS basketball game last night which caused concern and was offensive to many of our community members. During the game a few students held up handmade signs symbolizing a “K”. The K was short for ‘OK,’ and is generally used by students in text messages. The signs were created by students as a response to the opposing team’s chants, and were not intended to be held up next to each other, or to represent a message other than ‘OK,’” Porter wrote.

“The CHS administration will continue to investigate this situation, as a public school should remain a safe place for all students. [CHS] will continue [its] efforts to make sure this is the case in Carlsbad,” he said.

Aside from the the controversy, the rest of the game flowed without major fan disruptions.

Carlsbad had a 19-9 run in the third quarter, as Scott was given a technical foul and was on the bench for the rest of the game. The only strong points for the Bobcats were the big block by Sonck and a tough layup by Rossi toward the end of the quarter. These plays brought SC within 13 points as the quarter ended with CHS leading 44-31.

Senior Bridger Hackworth emphasized some key aspects of the second half that he felt were lacking from Friday’s game.

“We just [have] to hit our free throws and make the easy shots. It would have helped us make a big run in this game,” Hackworth said.

The fourth quarter erupted with cheer from the Bobcats’ fans, as senior forward Bryce Buscher got an and-one for the Bobcats to bring them within 11. Then, Allison stole the ball and drove to the rim for another “and-one” to bring the team within nine with only five minutes remaining.

Sage Creek’s strong offensive play continued as freshman Jailen Nelson got a put back layup and stole the ball on the next possession. His defensive maneuvering got the ball into the hands of Buscher who grabbed three offensive rebounds until getting fouled and hitting one of two at the free throw line.

As the Carlsbad offense continued to battle, Buscher got another “and-one” for the Bobcats to bring them within 10 with two minutes left.

With the Bobcat offense trying to make a comeback, Rossi hit a huge three, Allison had a nice dish and dime to Buscher, and Nelson hit a mid-range jumper to bring the Bobcats within six. However, Carlsbad hit their free throws and held on to win 65-60.

After the game, Buscher described his reaction to the game.

“After the game I was devastated. I couldn’t believe that we just lost. I left my heart on the floor and coming away with the loss hurt in so many ways. But as much as it hurt I knew that we couldn’t dwell on the loss. We still have a chance to go out in the playoffs and right the ship with a CIF championship,” Buscher said.

Despite the loss, Cudal had an inspiring message to boost school spirit and encourage more fan participation.

“I’m so happy that SCHS students are coming out to both boys and girls games and that they are just as excited as we are to be there! Hoop-Coming and the BOTF day was a huge success, but we can definitely see the overwhelming Sage Creek dedication in our SC vs. CHS games,” Cudal said.