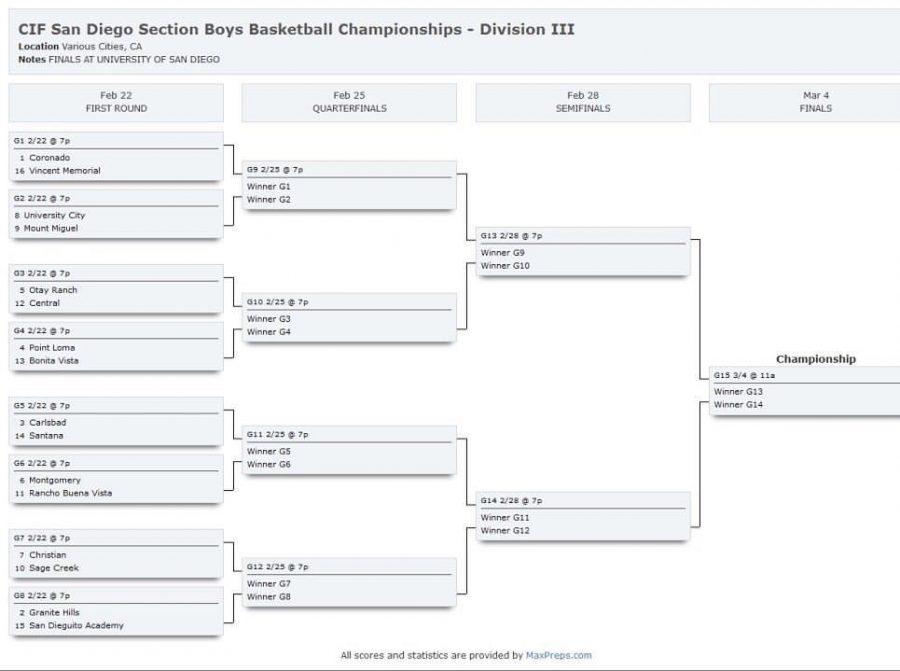 Sage Creek High School’s varsity basketball team finished in the 10 seed for CIF playoffs and will begin their journey this Wednesday at 7 p.m. on the road. The team will travel to El Cajon to take on the Christian High School Patriots who took the 7 seed of the 16 teams in competition. Compared to Sage Creek’s 3-7 league record and 10-17 overall ranking, the Patriots were 8-4 in league and 19-9 overall.

The Patriots averaged 51.7 points per game while surrendering 52.6 ppg this season. Christian High School’s top scorer- and largest threat on the court- is the 5’9 junior point guard, Nashom Carter. Carter shot 48 percent from the floor along with averaging 21.5 ppg, 6.2 rebounds, and 4.3 assists per game this season.

Other threats include sophomore forward, Jackson Larsen and sophomore guard, Domanic Safarta. Larsen towers over opponents at 6’5 and averaged 12.2 ppg as well as 5.4 boards throughout the year. The guard, Safarta stands at just 5’7, but managed to tally 11.7 ppg and 3.4 reb. At home, the Patriots are 9-5 and will look to battle their hearts out to advance to the next round.

Sage Creek enters this game after finishing second to last in the Avocado West standings. The Bobcats averaged just 38.1 ppg while allowing 54.6 ppg. At home, SC went 3-3 and struggled on the road with a 6-9 record. Their leading scorer is senior point guard, Xavier Allison. The phenom point guard and co-captain averaged 11.6 ppg, 6.9 assists, and 4.1 rebounds overall.

More key players in the Bobcat offense include senior and co-captain Dylan Rossi, as well as freshman point guard, Jailen Nelson. Rossi managed 7.2 ppg and added to that with 3.9 rebounds. The freshman guard scored 7.3 ppg along with 2.4 rebounds in his first year with the team.

Whether it’s the Patriots or the Bobcats, the winner will compete at 7 p.m. on Saturday, Feb 25 against the winner of San Dieguito Academy v. Granite Hills. Finally, it is worth mentioning that if Carlsbad High School defeats Santana HS and the winner of Montgomery v. Rancho Buena Vista, they will host the Bobcats on Feb 28.