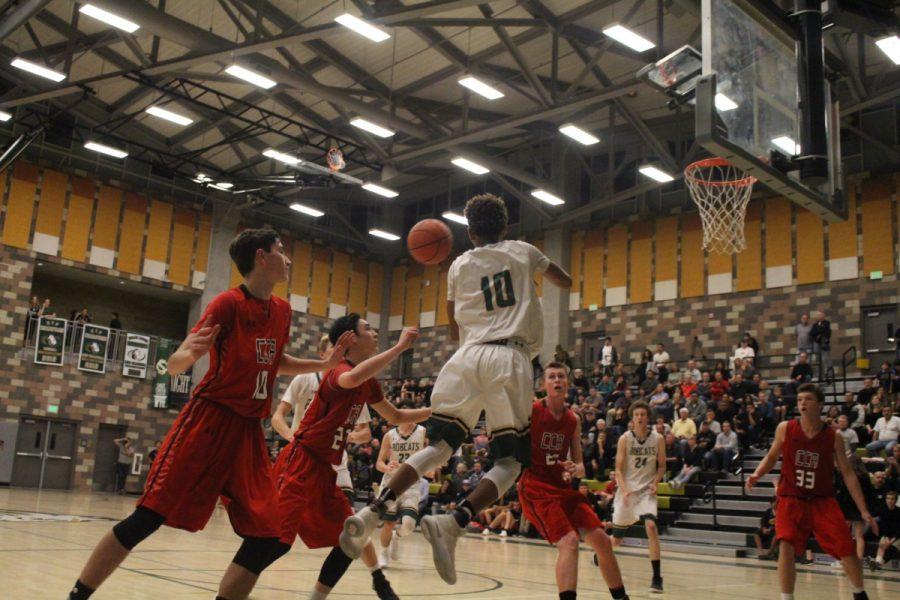 Freshman Jailen Nelson drives along baseline against the CCA Ravens

Camera crews, dancing shoes, and the blues. Friday’s Hoopcoming game featured a night of energetic performances, wild screaming, a blackout audience, and a disappointing 70-40 defeat at the claws of the Ravens.

Canyon Crest Academy brought their A-game to the Bobcat arena and overpowered the energy of the crowd bit by bit until its student section (of about 15) cheered victoriously.

“[Sage Creek’s energy] is powerful for our team, it keeps momentum going, and keeps us in the game. But once the crowd is out of it, it’s tough to get them back in,” Coach Brandon Dowdy remarked.

In a night where the Bobcat Nation was competing in the battle of the fans competition, Star Wars lightsabers and dark clothing set an extremely unique and welcoming atmosphere for the Bobcat boys.

“It’s very important. This is a great environment and I love it, but we have to do our job to take care of our business and keep that type of thing going,” Dowdy said when discussing the crowd and its liveliness.

Aside from the electric environment, the 28-11 deficit of the first quarter showcased the Ravens’ offense, which remained relentless throughout the game. Senior forward Dylan Rossi broke down the CCA offense and delivered his analysis on the Ravens’ success.

“Their offense is completely drive and kick with screens; their whole team can shoot. They’re all lethal at that point. They were draining threes, penetrating and taking it into the basket,” the forward explained.

While Sage Creek came out of the gates with some inside drives by senior point guard, Xavier Allison, CCA escalated their offense to another level.

“[CCA’s] first couple of plays were all drives and a few and-ones. That made it harder because then we had to worry about the drive even though they’re all shooters. It’s a double edge sword,” Rossi expressed.

During the second quarter, the Bobcats were able to dull the sword and hold CCA to just five points, but Sage was only able to muster four.

The Bobcats have averaged 28.3 points in the first half of their games this season, but were held to a silent 15. At the beginning of the second half, however, the team came back roaring. Sage Creek pounded the lane and tallied 15 more in the third quarter, but once again, the defense fell soft.

“We [needed] to guard the ball better. Whoever was guarding the ball got blown by [and] the rotations were too slow. The main thing [was] on-ball defense and then the rotations follow that,” point guard Xavier Allison remarked.

The Ravens exploded for 22 points by draining multiple threes and drawing early fouls for trips to the free throw line. Despite only averaging 12.1 points in the third quarter this season, they lashed out and took a commanding 55-30 lead going into the final period.

“They were moving the ball and getting [ahead]. We just needed to focus on running the offense more,” Rossi reflected.

Even with the eardrum pounding chants and energy of the B-Cats in black, CCA clung to its lead throughout the fourth quarter by controlling the clock and drawing eight fouls in the first minute and a half. In discussing Canyon Crest’s offensive execution, Rossi pointed to the time spent on both ends of the floor.

“We would run down, put up a shot within the first five to seven seconds of the shot clock; not really working the ball around,” he said, “We were playing defense on them for 30 seconds.”

Not only did CCA knock down their shots, but they controlled the entire floor. Penetrating guards kicked the ball out to open men for triples and the Ravens were all over the Bobcat offense down low with multiple blocks.

“We switched to zone, we switched to man-to-man. We gotta get better defensively as a team and do more to control the penetration,” Coach Dowdy emphasized.

Sage Creek’s morale was dimmed, but it wasn’t darkened. In possibly the longest post-game meeting all year, Allison optimistically shared what went on behind the closed locker room doors.

“We just had a long team meeting and I think that was really positive. We addressed everything that the team believes that each individual [player] needs [to improve with], and we’ve become closer,” Allison said.

Torrey Pines hosts the Bobcats this Tuesday on their home court and that is where Sage Creek will look to tear through this rough patch of basketball and find the bottom of the net on the road.