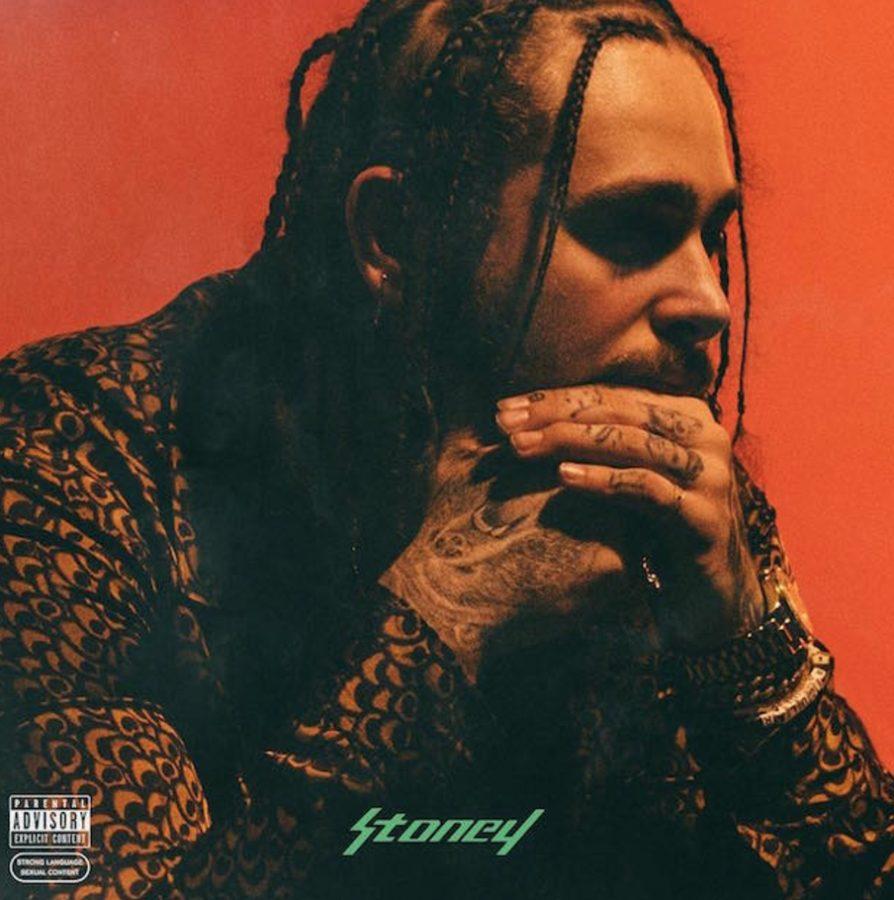 I have been a fan of Post Malone for about a year now, and his release of White Iverson is what drew me to him. He has a unique style about him, something I hadn’t heard before.

As of then, he had only just started releasing singles after White Iverson such as Too Young,  #mood, What’s Up, and Boy Bandz. White Iverson at it’s peak was able to reach number 14 on Billboard’s Top 100. For a first song, that’s pretty amazing. With his popularity rising, he was signed by Republic Records in late July of 2015.

Malone began as a country artist when he was a teenager. He appreciates music as a whole, and in an interview with HOT97, he said he doesn’t like to limit himself down to just one genre, therefore, he isn’t a rapper.

Malone also has a one of a kind look to him. He has gold teeth, plenty of tattoos, cornrows, and a beard. His voice is amazing and by just looking at him, you would never guess it.

Stoney finally dropped after an eternity of waiting and I immediately downloaded and started listening to it. The album starts with Broken Whiskey Glass which starts off with a kind of wild, wild west feel as he sings through the sound of crows screeching and wind. He is singing about his journey here, all of the women who treated him poorly, and all of his friends who told him that he wouldn’t amount to anything. But now he’s in the White House ruling over everyone and laughing at the haters and exclaiming how he made it.

Coming up at number two on the album is Big Lie. Malone mastered this song with a catchy chorus and a fast-paced beat. In this song, he’s talking about “all the lowlifes flexin,” which means he sees all the posers showing off their things trying to feel important, and Malone is tearing into them by calling them liars.

The next track is Deja Vu, featuring Justin Bieber. This is easily the best song on the album. Malone puts together an original beat that can really get you moving. After you get past the new style of rhythm he brings to the picture, he really pulls you in by putting together a short love story and telling this girl about how she’s one of a kind and that he’s the right guy for her. He says he’ll treat her right and that she’d enjoy being with him because he’s rocking that “new Mercedes.” Just having JB’s name on the song equals automatic money.

No Option comes up next and he’s doing more singing than rapping in this one. Malone is telling his girl that he doesn’t want to say “I told you so” but when this album hits it’ll be huge. This girl seems to be telling him that the album will be garbage and he will continue being a nobody, but she leaves him with no option but to prove her wrong. And, as he often reminds us, he’s rocking a new Mercedes.

For the fifth track we have Cold. There’s not too much to say about this one because of the lack of lyrics. He’s really slow with getting each word across and he often just repeats himself. I’m not too much of a fan of this one. It’s alright, but it has an obnoxious beat and messy diction. I still enjoy listening to the song, but it’s the far from one of my favorites.

It’s finally time for song number six: White Iverson. This song is his biggest hit as of now. With this well-known song added to the album, it has already attracted some extra attention. White Iverson was also written only two days before it was recorded.

Track number seven, I Fall Apart, is beautifully written and really attracted me towards it from the beginning. Post is telling a story about an ex-girlfriend who left him after cheating on him. He now feels like he isn’t worth anything and he’s reliving all of the memories and everything he’d done for her just for her to leave him like it was nothing. He fell into a deep depression and developed a drinking problem just to try and put a band aid over his scars that she left him with. The lyrics are so deep and meaningful it’s ridiculous. He enters into the song with a slow and settle feeling by saying:

“She told me that I’m not enough/And she left me with a broken heart/She fooled me twice and it’s all my fault/She cut too deep, now she left me scarred/Now there’s too many thoughts goin’ through my brain/And now I’m takin’ these shots like it’s novacane.”

Track eight is another pre-release called Patient. I wasn’t too ecstatic about this song when it first came out, but now that I’ve been able to sit down, and really focus on his lyrics, this song has a whole new meaning to me. He’s letting all the fans know that he won’t let the money go to his head and change him. He doesn’t believe in letting pieces of paper control his life and his decisions. Malone says in the song “That ain’t the way my mama raised me.”

Number eleven is the second song I had ever heard by Post Malone, Too Young. This song is a tribute to his friends who have already died by the time they even reached twenty-five. Post says over and over again “I don’t wanna die too young, I’ve been grinding way too long.” He is making sure it is known by everyone how much effort and time he has put into his music career and he doesn’t want it all to be gone just because he couldn’t put better self-control on his decisions.

Yet another amazing pre-release was Congratulations, featuring Quavo. This song will be a bestseller because of its incredibly hard beat and easy to learn lyrics. The song is Post on the phone with his mother because she said she saw him on TV and he seemed to just need to vent and put everything out there. He’s telling everyone that no one had any hope or belief in him and he proved them wrong on a whole new level. Lyrics, “They said I won’t be nothin’ now they always say congratulations” reflect his intense works ethic and how he forgets how to vacation. He also shows off how nobody knew who he was a year ago, but now he’s blowing up as a future icon.

This one is a little interesting. It’s a quick and short little three minute song with mostly chorus’ over verses. Track thirteen, Up There, is an interesting little song. What I’m assuming happened is he was having a stressful night with his girlfriend and needed to get out of the house for a little while. He got in his car and rolled the top down on his convertible and drove off into the freezing cold night. He’s contemplating life and looking for something to do but has no one to talk to about it.

Okay, whew, we’re on to a “less” depressing song. Track fourteen is called Yours Truly, Austin Post. For the first time he mentions his real name in a song. He is really happy because he’s at a party filled with the three things that are most important to him: Women, drugs, and alcohol. He is describing how he appreciates the things he has while at a party and filled with craziness when he’s just trying to lay back and enjoy life. People are always asking for favors and he just wants to lay back and chill just for one hour.

For the final pre-release of the album, we have track number fifteen, Leave. Right off the bat Malone tells us that he loved her and she told him to leave. This was the beginning of his adventure to California, where the startup of his popularity began.

Track 16, Hit This Hard. I didn’t really see a point to this song. I mean it has a decent beat, but the lyrics really ruin this for me. It only bothers me because I know he is capable of so much more and he just wastes it on a song about drug use. I won’t go on about this song because it was pretty much a disappointment.

This next song is a little different with its beat. Track 17, Money Made Me Do It featuring 2 Chainz. Again, Malone decides to flaunt his awesome lifestyle and money in our faces. The entire song consists of him describing the lifestyle of a B-list celebrity. I’ve never been a big fan of 2 Chainz because of how he obnoxiously yells his name before his mediocre verses so that didn’t do too much for the song, but on top of that, Post looks insolent, practically bragging about how much better his life is than ours is, and if he makes any dumb decisions his excuse will be that money made him do it. Which contradicts what he said previously in Patient when he claims that he won’t let the money change him, but I can’t do too much complaining because what do I know? I feel rich and powerful when I find a quarter on the ground.

Now, onto the last song of this iconic album, track 18, Feeling Whitney. This song took me by major surprise because it is nothing like the others on this album. It is the most chill and laid back song I have ever heard in my life. I almost fell asleep listening to this the first time (could also be because it was really late at night when this album released and of course I had to listen to the whole thing the first chance I got) because it was so calming. It is a very light guitar strum throughout the whole song and Post Malone’s soothing voice breaking through the riffs of the guitar and just queuing the sleepiness. In the song he is in his room just chilling out for days without coming out because he’d been partying and performing concerts in the previous weeks. This is truly where his appreciation for all kinds of music comes in and you can really tell.

Overall, this album was amazing. Considering that Post Malone was a true underground artist before this album was released AND Stoney happened to release the same day as a well known rapper J. Cole’s new album came out, I think he did really good. It was nice to feel like a hipster knowing of an artist that not many others did but, now I’ll finally be able to say “Do you listen to Post Malone?” and they’ll actually know who I’m talking about. I truly and wholeheartedly believe that Malone will be the “next big thing” and even my kids and grandkids will know who the legendary Post Malone was. So, with that being said, I give Stoney a solid 9.5 out of 10 and I definitely recommend it to anyone who like songs that tell stories because that is what he does best. Now, if you’ll excuse me I’m going to go listen to Feeling Whitney and take a nap.