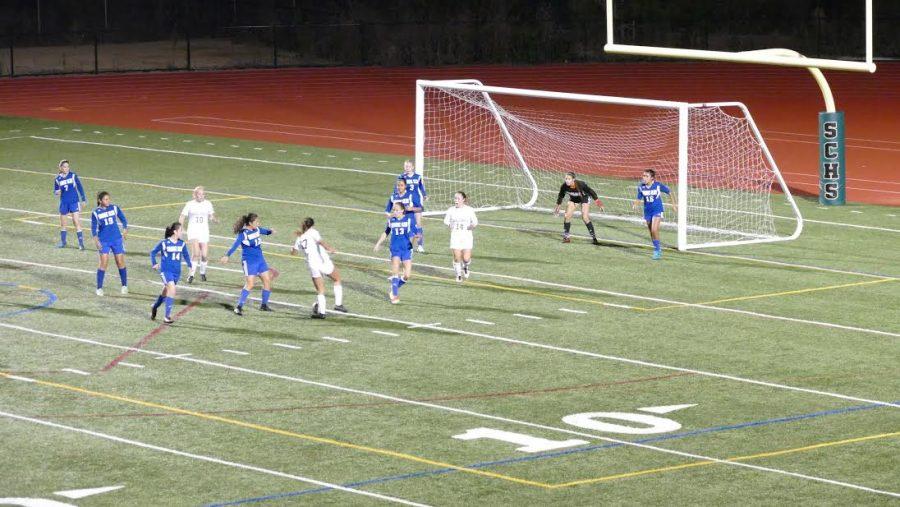 Isabel Sloss #17 with the ball at her feet in the middle of a set piece play. Photo courtesy of Joe Zueck

Since Sage Creek hasn’t had their first class graduate yet, they didn’t lose any talent this year, but they sure gained a lot. Last year, the Varsity Girls Soccer team was able to crush the competition and make it to the CIF finals. This year they have high hopes of winning it all.

After watching the girls’ second preseason game against Orange Glen, it is very evident that this team has some very dominant offense. In the first half, they were able to tally four goals before the Orange Glen could manage one. This offensive strength can be attributed to one of this year’s star forwards, Silje Vigeland #14 (known by her teammates as “Seal”).

“[Seal would] like to get back to CIF finals and hopefully bring home the banner this time.”

But for her, the impressive part isn’t just the goals she scores; it’s the passion she displays on the field. The reason she keeps playing isn’t the glory, “[she] just love[s] it.”

Another fresh set of legs has joined the team this year. Harper Hughes (#21),is a freshman midfielder, has displayed complete dominance in her position. Her consistent touch on the ball allows her to keep her head up in the heat of play and control her team. It’s always inspiring when a freshman can join the team and quickly assimilate into the starting eleven as a clear leader.

She values the mental game more than anything technical claiming that every player can work on “bonding with [their] teammates, so when [he/she] get[s] on the field, it’s easier to play with them.”

An interesting thing to know about this team is that none of these stars are captains. No one is captain. The coach, Courtney Drummond, sees that the expectations of a captain are set on every player that makes the team. This style of coaching really helps the team bond and act like a family on and off the field.

The girls recently showed their ability to win big matches when they brought home the SoCal High School Classic title.

They beat San Gabriel Mission 3-1 in the final match to top off a great tournament performance. Their consistent play throughout this tournament and depth on the roster displays great signs for their success in future tournaments and big games.

This team has the ability to win it all, but they will have to be able to play the full 90 minutes of every game. In their game against Orange Glen, their 4-1 lead deteriorated to a 4-3 lead that stood until the end of the game; this means that their 4-1 comfortable blowout turned into a 4-3 nail-biter. This trend was also evident in their next game against Escondido. The girls gave up a 2-0 lead in the second half and walked away with a 2-2 tie. This means that if the girls want to win it all this year, they have to play every game all the way through the best way they can. Based on the quality of their first half performances, I think they have a great shot at bringing home a CIF banner this year.