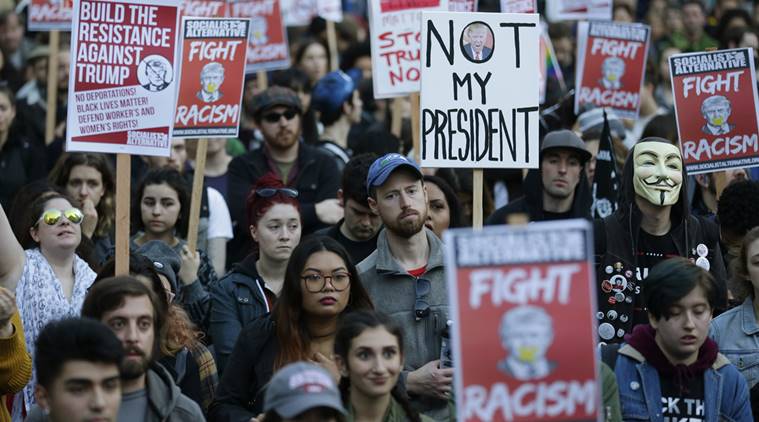 A photo from "The Indian Express" reveals never Trumpers displaying signs as they protest the election and ideals of President-elect Donald Trump.

When little Billy wants a creamy Hershey’s chocolate bar from the grocery store, he asks his mommy for it. But when he doesn’t get his candy bar, he screams, throws things around him, and ensures that the people in line know that his “mommy is a meanie.” Unfortunately, certain citizens have taken thorough notes from five-year-old Billy and are applying them to the aftermath of this presidential election.

Therapy dogs, counseling sessions, blocking freeways, organizing school walkouts, shooting civilians, and burning buildings. Grow up! These anti-Trump “protesters” need to accept that Donald Trump is going to be the 45th president, and that the election is over.

Certainly not all of the protests nationwide are violent, but to claim that these public demonstrations are factually supported and not anti-Trump protests is laughable.

In the USA Today Article, the protesters insist that they are aware that their actions will not overturn the decision, but they are enacting their first amendment right to freedom of speech. Here lie the real issues:

Out of all the cities listed reporting violence from protesters, Salem, Oregon was apparently “not anti-Trump but more against racism, homophobia, xenophobia and sexual assault…” So, these social justice warriors decided to just spontaneously hit the streets and advocate issues that just so happen to be surrounding Trump? To claim that these demonstrations aren’t in relation to Trump’s election is extremely outrageous.
Also, if love really trumps hate, why was a man shot?

In the Washington Post article, despite the calls to come out “to display unity” the student protestors of Wilson High School said that they “want [Trump] to have a sneak peek of what [they] want.” Furthermore, George Washington University Students insisted that their anti-bigotry rally was “demanding that their school issue statements vowing to protect minority students and reproductive health care on campus.” Here come a few thoughts:

When it comes to peaceful protests (like these), there is nothing wrong with advocating unity, in fact it’s somewhat commendable. There is nothing wrong with advocating for an ideal that you believe in, but trying to pass off an anti-Trump assembly as a way “to display unity” is absurd.
If the protests are not apart of “an anti-Donald Trump rally,” then why are the students preaching about bigotry, minority rights, and reproductive health care? Furthermore, why are these students outcasting their fellow Trump supporting students? All of these issues revolve around Trump and I’m going to go out on a limb here and say that these leftists and never Trumpers didn’t just conveniently arrive in the same place.

Lastly, there is the CNN article to dissect. Although the concerns varied from “Trump’s proposed plan to build a wall” to moral issues surrounding Trump’s campaign, there are prevalent reasons that question why this all connects to factually unsupported anti-Trump feelings:

New York protester, Nick Powers, claimed that he is terrified that “Trump’s victory would embolden sexist views.” Okay Mr. Powers, who will embolden these views? How can you factually connect Trump’s victory to a sudden rise of sexism? Simply put, you can’t; it’s faulty logic.
An organizer for Social Alternative at Berkley, and a member of the “Not my President” club, said that “people are furious, not just at the results of the election but the rhetoric of Donald Trump.” Look, we all know that our President-elect has uttered some raunchy statements, but did 30 people in Berkley’s community really need to be “arrested [while] 11 citations were issued for vandalism, assaulting officers, unlawful assembly, failure to disperse and possession of a firearm?”

Now, these “protesters” have the right to protest; The Library of Congress makes it clear: “The Supreme Court of the United States has held that the First Amendment protects the right to conduct a peaceful public assembly.” The key word is peaceful in case you overlooked it!

America fairly elected Trump, and Hillary Clinton realized that when she conceded. The truth of the matter is, these never Trumpers are protesting free elections.

How dare the government give us the right to vote. How dare they have the audacity to let us decide who we want to run our country. Those fiends! Why don’t we all storm the streets and burn cars while chanting, “Down with Democracy! We want Tyranny!”?

Before proceeding, I want to make these facts very clear: I am not a Conservative Republican, nor am I insinuating that Trump is an overly qualified president. I am not fully approving of all of his public statements (i.e. the locker room talk), nor am I supporting all of his policies or cabinet members. Lastly, I am not defacing the people that oppose him- just their actions.

Something extremely eloquent that my journalism advisor told our staff after the election was “lose with grace and win with grace.” Not only is she absolutely, 100 percent correct with this message, but she is setting an example for how our country should be reacting. And this goes for Trump and his twitter outbursts too. His hypocritical tweets concerning the electoral college and tweets throughout the election weren’t exactly up to par with what a role model should be demonstrating to a country he wants to lead.

Ultimately, this election proved just how horribly inaccurate the media was. Mainstream media outlets severely misled American voters with their inaccurate and heavily biased reporting on Trump’s policies and the pole projections, which account for the uninformed “protesters” rampaging through communities nationwide.

The LGBT community is fearing for the end of same-sex marriage. However, despite Trump’s opposition and initial desire to consider overturning the law, a recent interview with The Economist discussing Gay Rights and abortion should return the LGBT community from the edge of their seats. Trump simply emphasized that, “It’s law. It was settled in the Supreme Court… and I’m fine with that.”

As for his stance on abortion, that power resides in the supreme court, therefore Trump cannot directly make abortion illegal (it’s also highly unlikely that he’ll appoint someone who would try).

Musicals are lovely aren’t they? Everyone loves them because theatre is a safe place. Well, usually. Recently, the cast of Hamilton had a guest, vice president-elect Mike Pence.

At the end of the night, actor Brandon Victor Dixon addressed Pence and informed him of the cast’s fear that he and Trump would not protect their “inalienable rights” or “work on behalf of our American values.” Despite the cast’s peaceful, co-written message advocating that “American values” be upheld, Dixon seems to have twitter messages that certainly align with Trump’s clean, American locker room talk:

@TAMIKASLAWRENCE the problem is ho’s aren’t what they used to be. If ho game would step up, cats wouldn’t get distracted.

And before arguing, “So what? Some of those posts were years ago,” consider this. Trump’s “locker room” talk was 11 years ago. Criticize both or neither, but both need to be held to the same standard in terms of who is out of line on social media.

Another forgotten detail of the media includes the Ku Klux Klan’s (KKK) endorsement of Trump. Publications like the Washington Post and celebrity figures like Stephen Colbert were quick to criticize him for his delay in denouncing their support, yet the “protesters” seem to be conveniently forgetting that the KKK’s launch and spreading of white supremacy was achieved due to southern Democratic victories.

So, for the “protesters” denouncing American voters over siding with the same candidate as the KKK, wake up and acknowledge that your party (no matter how different the party was or how long ago they underwent changes) founded them.

The last section of the active “protesters” I would like to address are the ones slandering Trump voters with meager labels. Clinton apologists point fingers and label Trump voters as “sexists,” “homophobes,” “rednecks,” “hillbillies,” “bigots,” “racists,” “misogynists,” and “deplorables.”

If we really, really want to play the name game based on themes surrounding a candidate, then it’s fair game to associate Clinton supporters as “criminals,” “liars,” “thieves,” “conspirators for murder,” “money launderers,” “nasty people,” and “unfit to send emails.”

No more rioting, no more complaining, no more labeling. Enough is enough, just get back to work. If “protesters” want to keep “protesting,” that’s their choice, but they better not do it in my grocery store.