A Journey to Victory 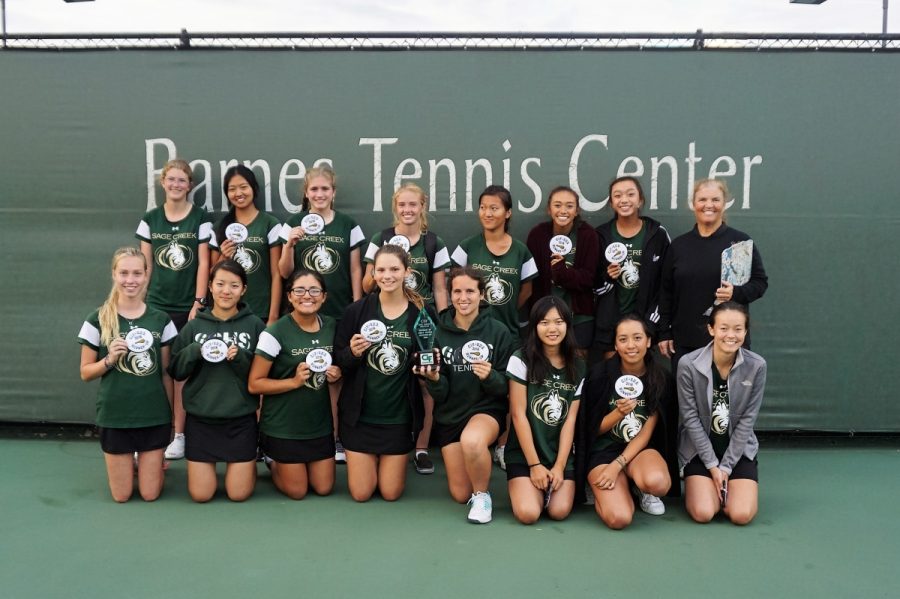 From wins to losses, to every teardrop and sweat bead lost, the CIF finals were a hard fought battle for the Sage Creek Girls Varsity Tennis Team who placed second in the Avocado West (division III).

On October 28, Sage Creek Girl’s Varsity Tennis Team headed towards Barnes Tennis Center in Point Loma to compete against Granite Hills High School for first place in California Interscholastic Federation (CIF). After a year of working with countless hours of practice, the ladies had their chance to win.

As the game day grew closer, many were undergoing second thoughts and stress.

“I felt [as] tensions were high. This was my first time in CIF, and like anyone else, [we] were stressed for the game,” sophomore Julia Fry emphasized. “The night of CIF, I knew a lot of us had tests to study for, so I wish some of us could have gotten more sleep.”

The Bobcat Ladies have grown substantially since last year. To beating division I teams such as Temecula High School and our sister school, Carlsbad High, was just another hurdle they jumped to land in CIF. All their hard work was showing, and the ladies were ready to take it further.

“Progressively we worked as a cohesive unit from the beginning of the season to CIF. We’re ready,” Fry said confidently.

After setting the example in their beginning games, the Bobcat ladies defeated Grossmont High School, a first seat team in CIF, claiming a short lived victory. But the game was far from over, as all they needed was one more win to claim 1st place in CIF. After previous games with division I teams during the season, the team was exceeding the levels of that the competitors they were facing in division III CIF, but that may have been their downfall.

“We we’re hitting the ball harder than expected, since these teams were lower, they were hitting weaker, which proved to be difficult and actually may have been a reason to what happened [next]” Fry explaining.

“We worked amazingly as a team and our team captains kept us in check for the game, and there’s nothing I couldn’t have asked for,” Fry commenting on the end game results.

Although it may have not been what Sage Creek wanted in the end, it’s still a triumph in everyone’s cards. So what if its not 1st place, the Bobcat ladies showed what they can do, and worked to their fullest till the very end. Not only did they prove Sage Creek is not a school to mess with, but they also set next year’s win to the reach the top. So great work ladies, shout out to your season, and beat them next year Bobcats!