That Pizza Place Reopens Its Doors 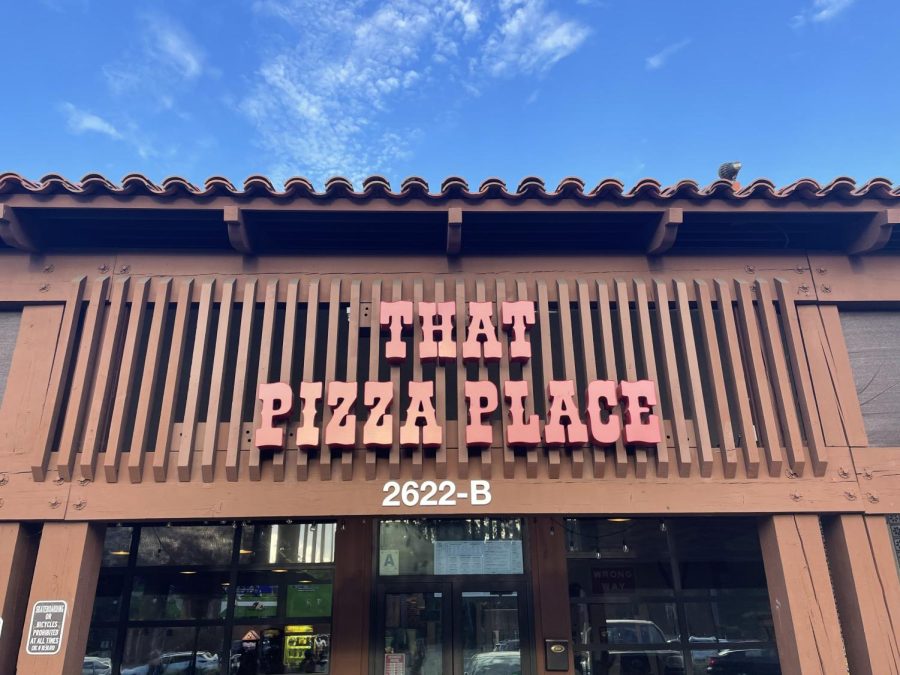 Although That Pizza Place reopened with additional changes to the restaurant indoors, the original location and sign remains present. Families are able to easily recognize and find the “new” restaurant.

Small businesses have become a staple within Carlsbad’s expanding city, making up a majority of the local corporations and income. These businesses have established such a significant imprint on Carlsbad, ostensibly due to the welcoming environment they foster.

This statistic expounds on why the closure of these stores influences their surroundings in a normally negative way. One of the most recent – and most mourned – store closures is That Pizza Place in the popular El Camino Real shopping center. The restaurant, which was open for 43 consecutive years and known for its sports rituals and family-owned nature, closed in 2020 to the dismay of many locals and tourists.

However, two months ago, the establishment opened its doors once again. Though in the same location with the same hours and delectable pizza, there was one thing subjected to change: the eatery is now housed under new management and new ownership.

Although customers celebrate the reopening of an icon of Carlsbad, the mystery behind exactly why That Pizza Place closed remains unknown. Customer Bailey Stumpges, speaks to the local perspective of this puzzling closure.

Stumpges discussed That Pizza Place before its closure. Like most, she found comfort in the family-owned restaurant and missed its support for sports programs and the sports community as a whole. Despite the fact that Stumpges is unaware of the reason for closure, she plans to return to the eatery.

“Hopefully the people who have bought it now would understand what it meant to a lot of people, so I would hope that they would try to, like, make it feel the same,” Stumpges said.

Because the business is only two months old, employees and staff have been recruited under new management and customs. Addie Rudy, a new employee who works both up front and in the kitchen, spoke about her love for the restaurant both old and new.

“It’s always been just such a great place and such an icon to Carlsbad, so I thought that working there would be a lot of fun,” Rudy said. “We’ve been open for two months now so we’re only starting to work out the kinks and stuff, so that could be part of the reason why wait times might be a bit higher or prices might be a bit higher.”

The staff at That Pizza Place are working their hardest and are simply glad to be back in business.

Still, the question remains: why exactly did That Pizza Place close if they are loved by so many? One of the current owners, John Chavez, does not have all of the specificities either. He postulates that the closure had to do with the COVID-19 pandemic and its effect on small businesses around the world. About one-third of the world’s small businesses closed due to the Coronavirus pandemic according to the Austin American Statesman newspaper.

As small businesses have been recently reopening, Chavez saw the opportunity to bring back the pizzeria from his childhood known as That Pizza Place; which had been shut down for close to a year. Taking action, he reached out to his childhood friend, a professional chef, whom he sought to help reopen and restore That Pizza Place’s legacy.

The company’s most significant difference between its 43-year reign and newly-reopened nature is the family connection it was most known for.

“The first four owners – we all grew up here,” Chavez said. “We’ve all known each other since we were in junior high, probably before junior high for a couple of us, and so we’re all family-oriented, and we’re going to continue to keep that family-oriented environment. Our goal is to keep that, you know, sort of warm, family, approach to the business.”

This redemption story is, in a few words, just the beginning. As the business expands and develops, hopes and goals develop as well. The aspiration is that the restaurant can redeem its reputation and that the many trophies displayed across the original brick walls are added for years to come.