The Leaked Draft: The Current State of Roe v. Wade and Abortion Rights in America 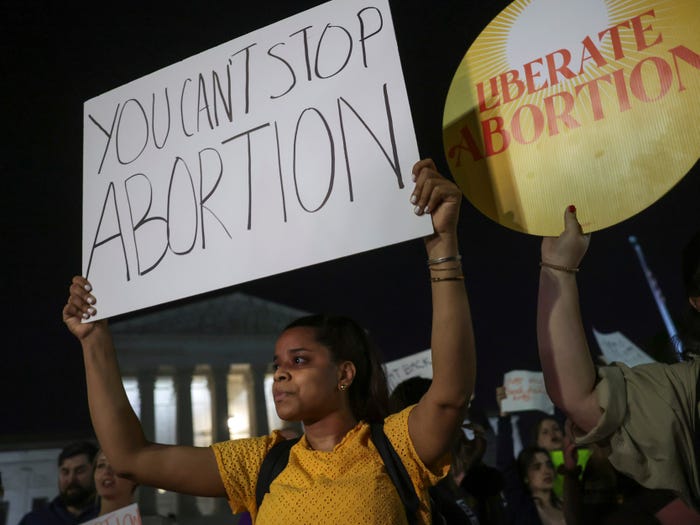 After POLITICO leaked a Supreme Court draft opinion that may overturn Roe v. Wade, protesters showed up at the court. Both pro-choice and pro-life protesters were present outside of the Supreme Court on May 2.

In the early 1970s, Texas had a law that made abortions illegal unless a doctor argued that it was a necessary procedure in order to save a female’s life. A woman identified by the fake name of Jane Roe (used in order to protect her identity) believed the state law violated her First, Fourth, Fifth, Ninth and Fourteenth Amendment rights. For these reasons, she decided to sue the Dallas County District Attorney, Henry Wade.

The case was argued in front of the Supreme Court which sided with Roe in a 7-2 majority in January 1973.

“Inherent in the Due Process Clause of the Fourteenth Amendment is a fundamental ‘right to privacy’ that protects a pregnant woman’s choice whether to have an abortion,” the court wrote.

The court added details about the decision which clarified if and how much states could regulate abortions.

It was decided that during the first trimester of a pregnancy the state had no power to prevent an abortion. During the second trimester, the state would be allowed to rationally regulate abortion with maternal health in mind. During the third trimester or once the fetus would be able to live outside of the mother (known as the “point of viability”), the state could regulate abortions as much as they wanted with the exception of abortions necessary to the health of the pregnant individual.

At the beginning of 1973, close to all the states had abortion bans with the exception of use as a physically life-saving procedure and a few other limited circumstances. After the Supreme Court’s decision in Roe v. Wade states were made to rescind these abortion banning laws.

Abortion access was made easier and safer which has proved life-saving. In 1965, prior to the Supreme Court’s ruling, illegal abortions were responsible for 17% of all pregnancy and childbirth-related deaths. In 2014, approximately 0.3% of women who receive legal abortions experienced any serious complications.

What Happened on May 2?

On May 2, at 8:32 p.m. POLITICO published a majority draft opinion on the Dobb’s v. Jackson Women’s Health Center case that would reverse the Supreme Court’s decision in Roe v. Wade.

The draft written by Justice Samuel Alito, a conservative justice, outlined the court majority’s opinion that Roe v. Wade should be overruled and that the issue of abortion should be a decision made by elected representatives.

The legitimacy of the document was confirmed by the court’s public affairs office.

The draft leak was unprecedented in modern court history and sparked an immediate response. Protesters picketed outside the Supreme Court the night the draft was released and in the subsequent days, protests have been held across the nation from Boston to Los Angeles.

Chief Justice John Roberts made a statement on Tuesday regarding the situation.

“This was a singular and egregious breach of that trust that is an affront to the Court and the community of public servants who work here,” he said. “I have directed the Marshal of the Court to launch an investigation into the source of the leak.”

The court’s decision will not be final until they publish their official opinion, which should happen in June or July.

What This Decision Would Do

If the court decision in the draft holds true, about half of the nation’s states would enforce abortion bans.

In a study published in 2021 by Duke University Press, Amanda Jean Stevenson, an Assistant Professor of Sociology at the University of Colorado Boulder, found that if all legal abortions are denied, regardless of if a woman pursues an unsafe procedure, pregnancy-related deaths would increase in the United States.

Stevenson estimated that there would be a 21% increase in pregnancy-related deaths if such a ban were to be implemented.

But no matter if a person identifies as pro-life or pro-choice, there are many different views when it comes to which and how abortions should be restricted or regulated.

“More than half of Americans who generally support abortion rights – by saying it should be legal in ‘most’ or ‘all’ cases – also say the timing of an abortion (i.e., how far along the pregnancy is) should be a factor in determining its legality (56%),” Pew Research Center published.

If the court’s decision remains the same when it is officially published this summer, abortion laws will be under the jurisdiction of the state governments. If this is the case, abortion may be a key voting issue for more Americans when it comes to state elections in November 2022.