The Goods: Doughnuts For All 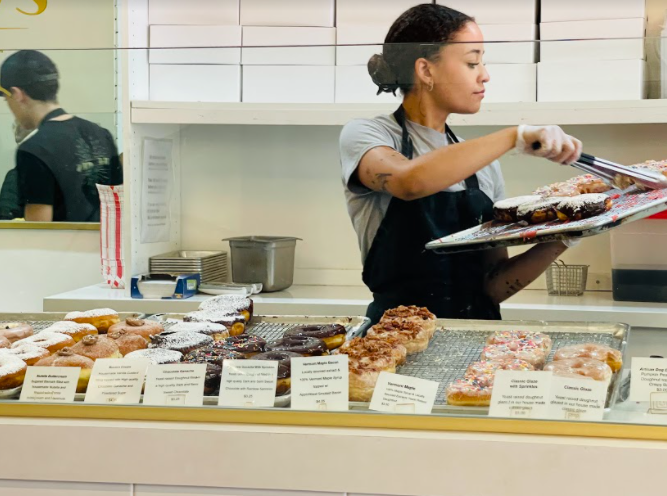 Pastry chef Alexis Wells places new doughnuts on the display rack for customers to buy. Every month, The Goods switch out their current doughnut flavors for new ones.

Originally opening in August of 2017, The Goods is a local artisan doughnut shop located at 2965 State St, Carlsbad, CA 92008. Known for their vegan and gluten free friendly doughnuts, The Goods offers a place for customers of all kinds to enjoy their locally crafted goods that are served fresh every hour.

The Goods is open Tuesday through Sunday from 7 a.m. to 4 p.m. (5:30 p.m. on Wednesdays) unless they happen to sell out of their daily items at an earlier time.

The Goods actually got their start from their “brother’s shop”, Café Topes located at 3091 Roosevelt St, Carlsbad, CA 92008. Initially the business only sold cinnamon rolls over at Café Topes, however, it eventually inspired the bakers to build their own company where they could sell doughnuts, pastries and more.

As time went on, the new business found success with their nutritious alternatives to sugary sweets and began to expand.

“We started out with only gluten free [options] and then only vegan [options]. Then it became super popular and people were requesting gluten free, vegan, egg free, soy free, nut free, dairy free and so on, so we just wanted to be able to accommodate all of our customers,” pastry chef Alexis Wells stated.

The Goods is also starting to serve a new keto free, sugar free and gluten free doughnut this month as well.

Even through the lockdown, The Goods continued to thrive. Unlike many businesses, The Goods actually benefited from the COVID-19 pandemic, resulting in the small business becoming more popular. For about six months, The Goods was the only open business on State Street, allowing many people to wander in and taste their delicious treats.

The Goods remains a popular location for many visitors to enjoy as they explore the Carlsbad Village, some days even having lines out the door. Each month The Goods changes out their doughnut line for new flavors. For the month of May, their seasonal doughnut will be a replica of the classical tropical mai tai beverage.

“It was really good, I got the lemon cruller and it was very hot and fresh,” first time customer Eric Miller said.

Even if you’re not a big doughnut fan, The Goods has an array of tasty pastries for their guests to try out, such as their homemade cookies and their very first item that they started selling over at Café Topes, the cinnamon roll.

“It is phenomenal, I’ve been here once before and my favorite is their cinnamon roll but I’d eat any of their doughnuts, it’s delicious,” Amanda Williams stated.

In addition to their large menu of sweets, The Goods also serves many teas and coffees that they brew in house with their espresso machine and sweeten with their homemade syrups. For May, The Goods’ seasonal drink is a dirty chai with rose petal syrup.

In the near future, The Goods is planning to remodel both their retail and their doughnut case. Within the next few years, the company may even begin franchising. However, currently The Goods is focused on setting up for National Doughnut Day which occurs on Friday, June 5.

“It is going to be a Friday this year so it is going to be wild,” Wells stated. “We may give out many doughnuts for free with a purchase so that’s cool but it is always line out the door busy, so if you come make sure you do anticipate a little bit of a wait but we will get to you guys as fast as possible.”