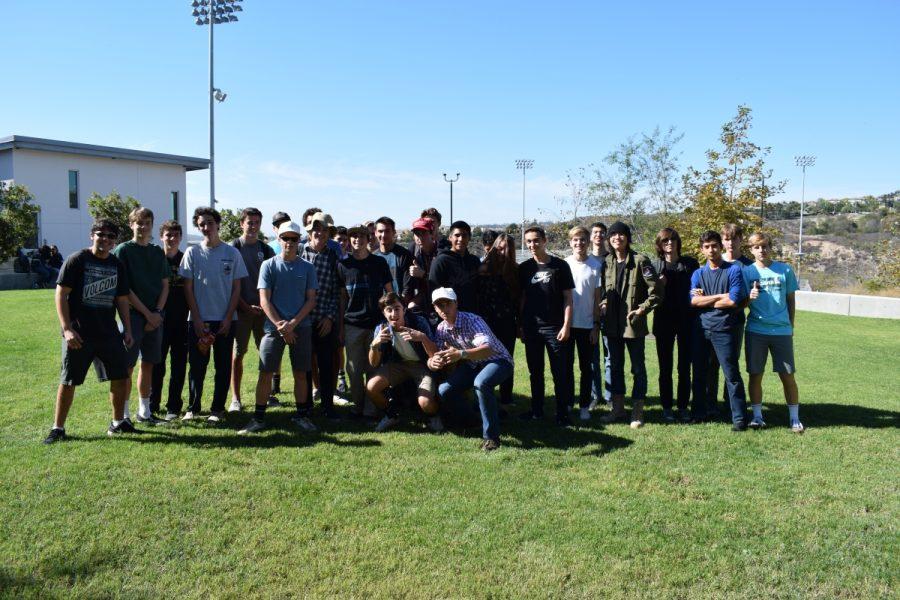 AFLAC poses for a group photo outside on the grassy knoll.

The Aspiring Future Leaders of America Club, or AFLAC, has been unable to meet for the past several weeks due to controversy surrounding the club.

During Club Rush, several students were heard chanting “build the wall,” a direct reference to one of Donald Trump’s promises to build a wall between the United States and Mexico. These reports were followed up by Principal Mr. Morales, who discussed the issue with a representative of the club. He does not disagree with the sentiment of the club or its purpose, but he does not believe that sort of rhetoric belongs on a school campus.

“What we’re trying to build here at Sage Creek is an embracing student community that allows students to feel safe, comfortable, and that they belong,” Morales said. “[But] also a place where there can be disagreements on ideas and thoughts in a manner that’s respectful, responsible, and that takes our student community into account.”

The club originally met in the chemistry lab of teacher Mr. Keyes, but Keyes has since stepped down from the position. He was initially supportive of the club and its goals, however, he became slightly hesitant to take on the role, given his lab would not be able to host a large number of students.

“I was willing to have 10-15 students having debates on real topics,” Keyes said. “My first impression was that [AFLAC] was going to be a smaller club format, which I support.”

During a pep rally a couple weeks ago, a student began to chant using the phrase once again. This outburst occurred just after Principal Morales spoke about Sage Creek High School being an accepting environment of all ideas and beliefs. As controversy surrounding the club began to swell, Keyes became less comfortable advising the club and has since stepped down as club advisor. Some students took personal offense to the chant, including senior Jules Garner.

“This freedom of speech is offending people,” Garner said. “Regardless of your political views, no one really cares if you express them as long as you are not being derogatory about it towards a certain person because at that point, it begins hurting people’s feelings and causing a lot more issues than it needs to be.”

The Club Rush event was seen by many to be an indirect targeting of the Latino community, as “build the wall” has been used in reference to the community in the past. However, some believe that the chant has been blown out of proportion and misinterpreted, including senior and AFLAC president Evan Friedman.

“All it means is it’s emphasizing the importance of security,” Friedman stated. “Some people think it’s meant to block out a particular race, but that’s not really the intent.”

The chant lasted “five seconds” according to Friedman, and was from students that were not officially a part of the club. As a result, Friedman does not believe AFLAC is personally responsible for these statements. “Remember, these were kids that just signed up. These weren’t members of AFLAC,” Friedman stated.

Other students have also claimed that the club has a bias towards Trump, but others have stated this is not the case, including senior and club member Zachary Munitz.

“The goal is to open dialogue between different political parties whether you are a Conservative, Liberal, Republican, [or] Democrat,” Munitz said.

The club does not currently have an advisor, but they are hoping to have one in the near future. According to Friedman, it has been difficult to reach out to teachers on account of the events that have been associated with AFLAC.

“There are 100 kids that really, really want AFLAC to happen, and if it doesn’t happen, those 100 kids are being left abandoned,” Friedman concluded.