What if We All Went Vegetarian? 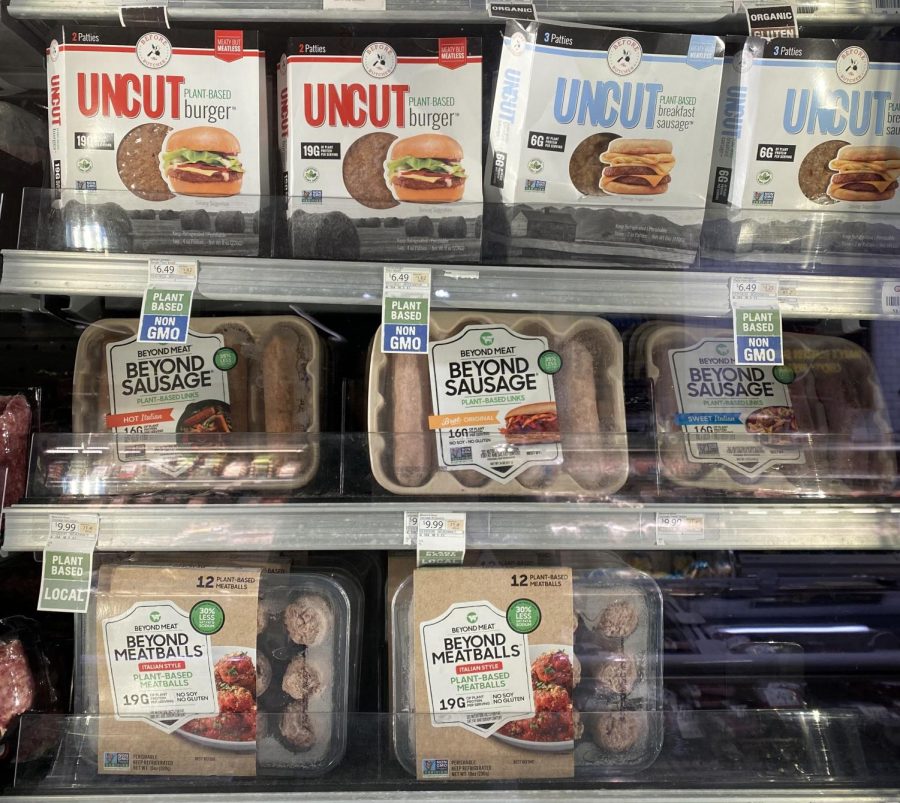 A local grocery store supplies many choices of vegetarian options which improve the environment. Their options have ranged from burgers to even meatballs.

You sit down in a comfortable chair and bite into a juicy, bacon-wrapped cheeseburger. You are starving and ready to satisfy your burger craving. But do you stop to think about the damage you could be applying to yourself and even the world?

80 billion innocent animals are butchered each year for the world’s meat consumption and there are increased risks of cancer, stroke and heart disease associated with eating meat. In addition, there are 11 times as many greenhouse gas emissions as a result of meat production.

Some individuals feel they can only get their protein from meat and that meat is purely beneficial. Even though there is protein in meat, we can also get protein from other foods, without having to slaughter animals.

“Beyond Burgers” and “Impossible Burgers” patties are much more preferable than a standard hamburger: these patties use 99% less water than a standard beef patty and it requires 93% less landmass to produce.

It requires 2.5 pounds of grain to produce just one pound of beef. If we eliminated meat from our world, the food used for animals could be used to diminish world hunger.

In addition, we can also get protein from other foods such as beans, cheese, oats, nut butter, tofu and even broccoli, meaning we don’t always have to rely on meat for protein.

Animal science researcher Robin White has a Ph.D. in animal sciences. She claims that you can still check off all of your daily nutritional requirements without the need of consuming meat.

“With carefully balanced rations, you can meet all of your nutrient requirements with a vegetarian diet,” White said.

Thanksgiving, one of the most popular national holidays, is also known as “Turkey Day.” It seems like a lighthearted, fun day, but in reality, it is a major issue in America. 46 million turkeys are butchered each year because of “Turkey Day.”

Thanksgiving is also harmful to the environment because of the amount of land used to raise the turkeys. Greenhouse gasses are released (that add on to global warming, causing it to be even more severe) and 520 gallons of water are used to raise one turkey.

Vegetarian Molly Glass is a sophomore who personally chose to change her eating habits to not consume meat.

Glass’s prediction about the negative effects of having meat was clarified by population health researcher Marco Springmann.

“The results indicate that – largely thanks to the elimination of red meat – food-related emissions would drop by about 60%,” Springmann said.

It would be stellar to be able to have a world that’s completely vegetarian. Land would become more freed up because there would not be as many animals and a need for them to roam and world hunger could decrease because the farmers would be more focused on feeding people instead of animals.

Biomedical teacher Juli Bachman has worked as a teacher for about 7 years and is knowledgeable about how meat affects the body.

I ask you to consider switching your diet to consume less meat. Try to have eggs instead of bacon for breakfast or try a “Beyond Burger.”

If you start switching your hamburger meat to Beyond Burger meat, this small change could save more water, land and animal feed. It could also make you less likely to suffer from heart disease or a stroke in the future.