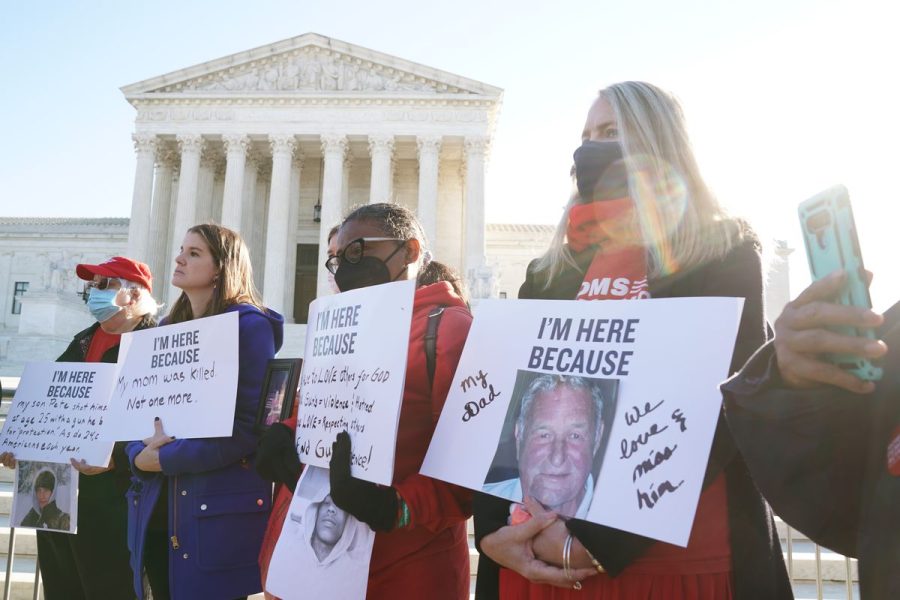 Gun violence survivors stand in front of the Supreme Court in Washington, DC. They gathered on the day of oral arguments in NYSRPA v. Bruen: Nov. 3

The Supreme Court heard arguments November 3 regarding the case New York State Rifle & Pistol Association Inc. (NYSRPA) v. Bruen, the biggest gun rights case the high court has heard in over a decade, concerning whether the state’s denial of petitioners’ applications for concealed-carry licenses as a form of self-defense violated the Second Amendment.

In 2008, the court recognized the right for people to have guns at home for self-defense in District of Columbia v. Heller, another huge Second Amendment case, and applied that right to the states in 2010. Now, it questions the limits of carrying concealed-carry handguns in public spaces, a case that would affect restrictions to firearms nationally. Based on the 6-3 conservative majority and how the court has ruled in the past few years, it’s likely that an expansion of gun rights will be the result of this case.

The Supreme Court takes very few cases. While over 7,000 cases are partitioned per year, only around 100 to 150 are heard.

“The Supreme Court likes to affirm the decision of the lower courts, so it’s very unique for them to take cases, but when they do take cases, they take ones that would have national implications,” Fisher said. “They’re also going to select a case like this, because […] there’s probably some discrepancy amongst the lower courts. They want to make this a uniformity of judgments. They want to make it a consistent policy, that every single court in America knows how to land on a decision like this.”

The U.S. Constitution is 4,543 words which allows for interpretation because of its short length, as seen through the Necessary and Proper Clause and the Commerce Clause. Nowhere in the Constitution does it include specifics regarding the Second Amendment such as background checks, concealed-carry permits or types of weapons people can possess.

AP United States History teacher Leif Peterson explained that when the Constitution was written, it was a very different time that had a completely different purpose for weapons.

“Weapons were a necessity in the frontier sort of wilderness,” Peterson said. “It was seen as your lifeline to survive with a rifle that you could hunt with or protect yourself against predators, animals, or even defense against different peoples.”

He also added that there was fear amongst the people after the American Revolution since they were afraid a strong federal government would be oppressive and take away their right to bear arms, which they needed to fight back against the government.

Returning to the modern-day, when gun owners Robert Nash and Brandon Koch were denied unrestricted concealed-carry permits, they, along with the New York State Rifle and Pistol Association (NYSRPA), sued in federal court. The state requires applicants to show a “proper cause” for needing a permit, with an actual need for self-defense instead of a hypothetical one for permission to carry concealed-carry handguns in public.

Since the men didn’t present a “proper cause” or “special need,” they couldn’t get permits. The plaintiffs’ argument is that the law infringes on their Second Amendment right to keep and bear arms. Since they didn’t get the decision they liked in the lower court, they appealed to the Supreme Court.

Two hours of oral arguments in an appeal took place at the Supreme Court by the two gun owners along with the New York affiliate of the National Rifle Association (NRA), a gun-rights group. In Supreme Court oral arguments, the justices directly ask questions to the attorneys that represent the parties of the case.

Attorney Paul Clement argued on behalf of the two men who were refused permits, opening by asserting that the New York Laws make access to guns a privilege for those with exceptional need.

“It is between regulating constitutionally protected activity and attempting to convert a fundamental constitutional right into a privilege that can only be enjoyed by those who can demonstrate to the satisfaction of a government official that they have an atypical need for the exercise of that right,” Clement said. “It is not some extraordinary action that requires an extraordinary demonstration of need.”

In addition, Justice Brett Kavanaugh questioned the “proper cause law” and specificity of danger needed for a permit to have a concealed-carry weapon in public. For instance, working or commuting in a neighborhood with high crime isn’t a “special need,” so it can’t be the basis for getting a permit under the law.

“Why isn’t it good enough to say ‘I live in a violent area and I want to defend myself?'” Justice Brett Kavanaugh asked.

Liberal justices seemed to lean towards wanting the current state laws to remain, bringing up the difference between rural areas and densely populated cities. New York is viewed as a highly restrictive state when it comes to firearms. Unrestricted concealed-carry weapons are granted more freely in rural areas compared to cities, which are much more populated. Conservative justices saw this as impermissible.

Some conservatives instead leaned toward the argument of the two men, who are from rural parts of New York.

“How many muggings take place in the forest?” Chief Justice John Roberts asked New York Solicitor General Barbara Underwood, questioning why weapons are granted easier in rural areas. Underwood responded with the fact there are different public-safety considerations even though there may be different self-defense needs in different areas.

Senior Christian Dorsey-McQueen expressed his concern as a student and community member about this case, which he believes shows that some people have become desensitized to the topic of school shootings.

“Every year we hear that there was a school shooting,” Dorsey-McQueen said. “Not only am I fearful of safety and what it can mean for not only me but future generations of kids.”

Whatever the ruling of this case may be, it will impact the entire nation.

“The Supreme Court will supersede every single court on this issue; they will become essentially the law,” Fisher said. ”They are not lawmakers. They are not policymakers. But their decisions sort of look like that.”

Once a Supreme Court oral argument is finished, the court meets to reach a preliminary decision on the outcome. This ruling won’t come for months, as the Supreme Court’s ruling is due by the end of June.

“After this case concludes, they’re going to write memos and letters to each other,” Fisher said. “They’re going to try to influence each other. And then ultimately, they will issue a majority opinion, which is going to have to be five or more justices. They’ll issue a majority opinion from the court, people who disagree will issue judges. Justices will issue a dissenting opinion. And people who agree with the decision of the court and the ultimate verdict, but for a different reason, will write a concurrence.”