“My team did absolutely amazing this season,” Fanucchi said. “We worked so hard and we won matches which is something that everyone wants to do and I feel that everyone worked to their fullest potential this season.” 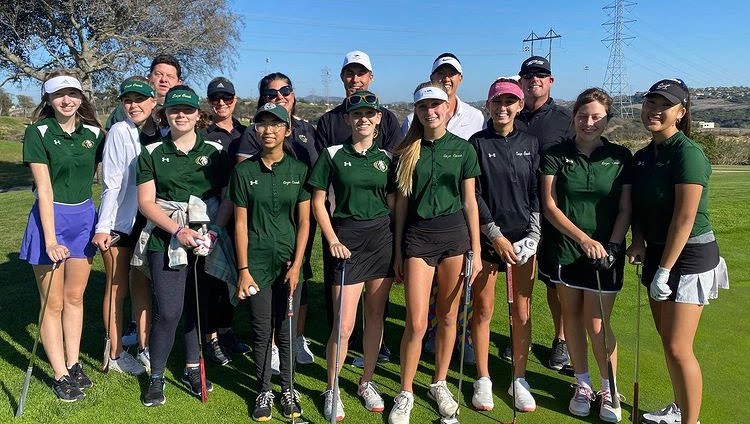 The players of the golf team as well as some of the Sage Creek staff pose for a photo. It was expressed that everyone here would want to play in the Staff vs. Student event again.

The varsity girls golf team has had a solid season, finishing as the tenth-ranked team in San Diego.

Despite the players practicing hard and playing almost every day since the beginning of the season, few have been able to witness their intense work ethic and what they have accomplished this season.

Coach David Walther was impressed with the teamwork players demonstrated compared to that of previous seasons.

Junior, Natalia Fanucchi, was impressed with the performance and effort of her teammates.

“My team did absolutely amazing this season,” Fanucchi said. “We worked so hard and we won matches which is something that everyone wants to do and I feel that everyone worked to their fullest potential this season.”

Recently, one event took place for the first time in Sage Creek history. The staff vs. student match brought their teachers onto the course to play against the golf team.

PE teacher, Danny Kung, described his perspective of how the event went.

“The event went off fantastic,” Kung said. “All the varsity girls were paired off with staff members… It was super cool to be able to interact with them because no one really gets to watch girls golf cause you have to head over to the golf courses and I don’t think you can go onto the course when they are actually playing.”

Science teacher, James Fieberg, described what it was like to play with the golf team.

“I thought it was amazing to get to play with our top girls golfers and compete against what are some phenomenal golfers,” Fieberg said. “And so I had a tremendous amount of fun just getting to hit shots, talking about different strategies out on the course, and just building community with students that I didn’t have in class.”

Walther explained how this event brought excitement to him and his team.

“It was actually really fun to see,” Walther said. “It’s just nice to see the teachers be able to come out and see the kids because nobody gets to see our kids play.”

Throughout the season the golf team is constantly striving to improve their game. Now as the season comes to an end, the players, such as senior Joleen Wobby, can reflect.

“I think [the girls golf team] has taught me a lot about teamwork and effort and efficiency that I can use in future years,” Wobby said.