Electric Bicycles Are on the Corner of Every Street 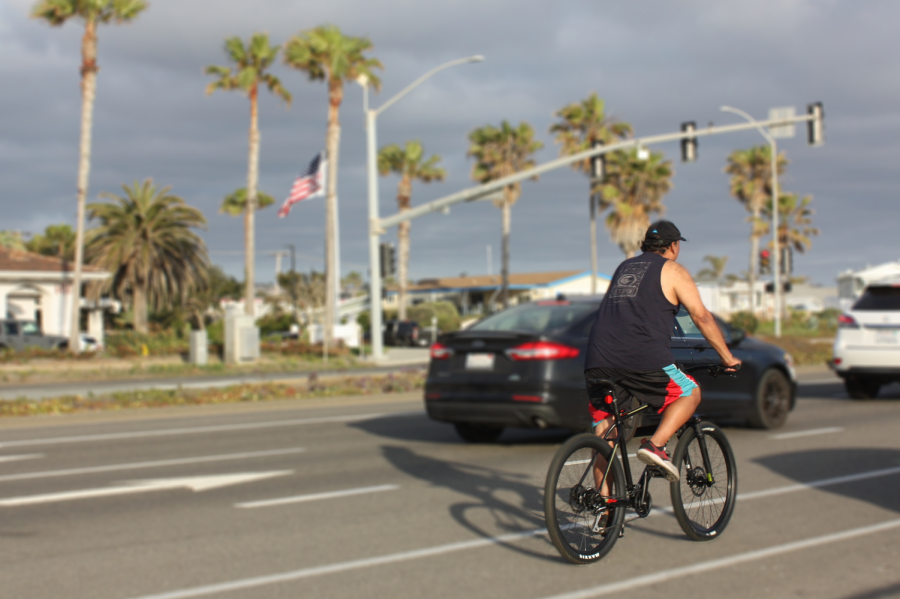 A man stops at the light while cruising along the Carlsbad coast. Bicycling, as a whole, has seen a major increase in popularity that some call the “bike boom”.

The whirs of a motor faintly fly by on the Pacific Coast Highway. The e-bicyclist glides past the cars, hauling bags of groceries effortlessly and arriving home within 10 short minutes.

It’s nearly impossible to go without noticing the presence of electric bicycling in Carlsbad, for both favorable and hazardous reasons.

Traveling as fast as 28 MPH, people of all ages have joined in on pedals with a rise in electric bicycle sales by 145% over the course of the pandemic. Electric bicycling has been beneficial especially to teenagers without licenses, allowing them to partake in various extracurricular activities.

“It’s been super nice because my parents don’t have to take me to my dance classes anymore, I can just go there myself,” sophomore Peyton Goddard said. “It’s kind of like just having a car and I can pretty much go where I need to.”

The annual growth rate in electric bicycling is predicted to be 7.9% from 2020 to 2021. This newfound hobby, although beneficial, comes with heavy responsibility. Sage Creek campus resource officer Trent Sakamoto has spoken on some of the guidelines that e-bikers must be wary of before getting on wheels.

“With the increase in bike traffic, the major concern is typically with the school kids, primarily the middle school kids,” Sakamoto said. “The police department considers bicycles just like a vehicle, like a car. You still need to obey all the rules of the road as if you were driving a car so going with the flow of traffic and staying on the right-hand side of the roadway, you shouldn’t be riding on the sidewalks.”

The past year presented more injuries amongst riders which caused concerns within the Carlsbad Police Department. In May, the police officers utilized Bike Safety Month to get the word out about safety measures such as wearing a helmet at all times. This easy-pedal invention has granted new opportunities when it comes to socialization during quarantine.

“Everyone was just looking for a way to be outside and when you’re on a bike, you don’t have to have a mask on,” Goddard said. “That was one of the ways in which you could interact with friends and get your vitamin D after being stuck inside for such a long time.”

Goddard found that e-biking has taken the pressure off of her to do the work when it comes to pedaling, making the experience slightly less rewarding. A study has found that people have an 8% lower heart rate when e-biking than when bicycling regularly. The propelling electric motor and rechargeable batteries that last between 25 to 70 miles depending on the model distinguish it from traditional biking.

“I actually have an e-bike myself,” Sakamoto said. “It allows people who may be not as comfortable riding distances or if they live in areas that have lots of hills or if they want to carry a lot of things, it kind of opens up a lot because it allows them to go a lot further and faster.”

The Carlsbad Village is the prime spot for e-biking. Pedego Electric Bikes in the Village Faire Shopping Center gives the community access to either purchase or rent an e-bike to get around the Village efficiently and freely. This development has given rise to optimism in the future of electricity-fueled transport.