The Problem with Streaming Services like Disney + and HBO Max 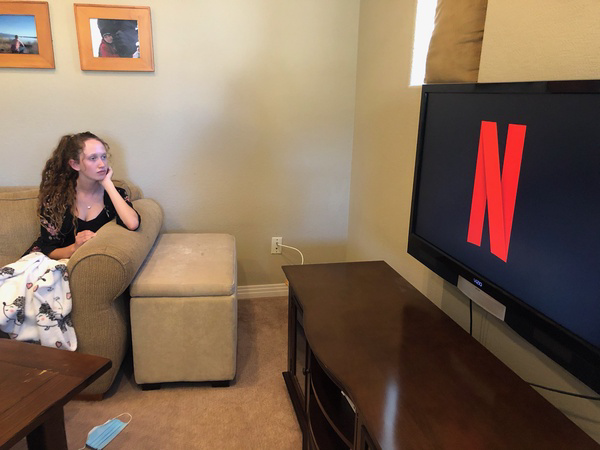 A student watches Netflix in their free time at home. It is a common pastime for many to return from a long day of work and unwind watching a show or movie. (photo by Evan Humphrey)

Streaming services have taken over online viewing of movies and TV shows, but some services seem to be much more widely used and loved than others.

“Why do we need streaming platforms like Disney Plus and HBO Max if we already have Netflix or Hulu?” Freshman Max Cooper said. “ There are much better options, and they’re already too many options without them.”

Even though a Disney Plus subscription is cheaper than one from Netflix, Disney Plus offers more of a limited selection. Plus, they are all still around the same price, so I believe that Netflix gives you more of a bang for your buck.

The different services on the market all have their own selection of originals and exclusives to differentiate themselves from others. Each streaming company has its fair share of powerhouse movies and TV shows that appeal to many different audiences.

Netflix has top shows like Breaking Bad, Queen’s Gambit, Community, and Bridgerton. Disney Plus boasts WandaVision, Falcon and the Winter Soldier, Once Upon A Time, and Mandalorian. HBO Max has The Flight Attendant, Silicon Valley, South Park, and Doctor Who. All three of these providers have some of the Highest Rated and Most Popular shows released in recent times, and they all seem comparable with this information.

Such a large part of streaming services is knowing how to appeal to the audience, and no other company does it better than Netflix with fresh new shows and movies releasing constantly and cleaning up the selection by sweeping older ones under the rug. This causes a wave of excitement seeing what new shows, movies, and documentaries are coming to Netflix and seeing which ones to put on the watchlist.

While Disney Plus has many hot shows, they all fall under a small umbrella of Walt Disney Studios, Twentieth Century Fox, Marvel Studios, Pixar, Lucasfilm, and National Geographic, limiting selection immensely. HBO Max has its fair share of hits, but they can’t quite seem to break through to the level of Popularity as Netflix or even Disney Plus.

While there are fans of both the HBO Max selection and Disney fanatics that just can’t get enough of Disney Plus, it may not seem as appealing for others, rather just extra cash down the drain for those not as interested.

Each site also has a different limitation, if one at all, of how many users can be on the same account at once. If there is a small amount, it may make the streaming site less catered towards larger families.

On Netflix, it varies on the amount you pay but caps at a respectable four users at once. Disney Plus also handles up to four people on the same membership at once. HBO Max, on the other hand, has the limit of three people on the same account at once, making it feel slightly inferior for a larger-sized family to own.

In the end, it is all up to debate. Each company has its own strengths and weaknesses, and just because one is the popular vote or someone’s personal favorite doesn’t mean it confirms what the best service is.

There will always be flaws to nitpick at, as not everyone’s interests are the same. All of the streaming platforms have different shows and movies to offer, so it is always possible to find what will suit one’s taste. Netflix, HBO Max, Disney Plus, and more all thrive in their own way in the world of the streaming business.