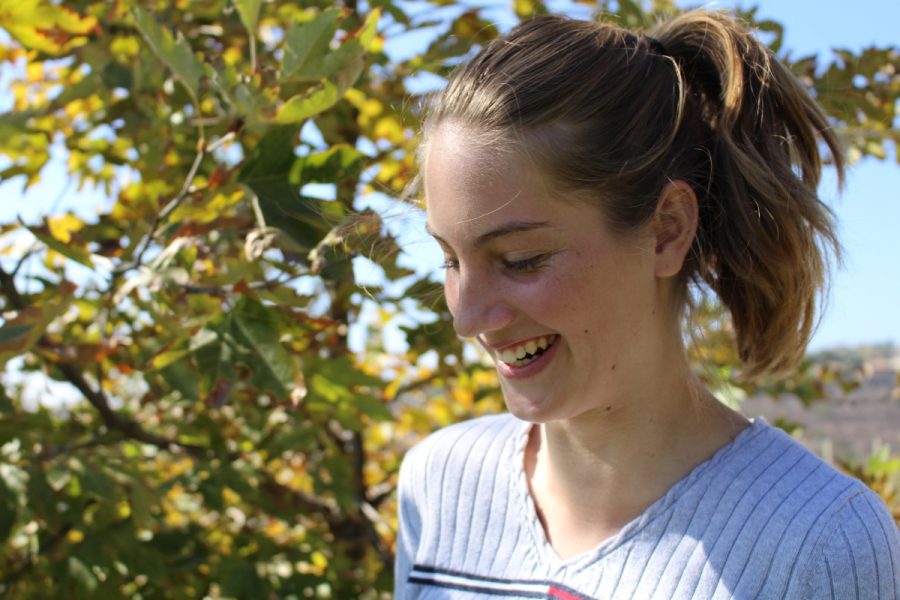 Bonnie Brasher laughs as one of her friends tells her a joke.

After four years of committing herself to gymnastics, sophomore Bonnie Brasher has found a new passion for volleyball.

“I use to do gymnastics [until] I realized I am way too tall for that, so I decided to quit and join something that would kind of help with my height, so I started volleyball freshmen year,” Brasher expressed.

Since starting volleyball she has played two main positions: middle and opposite. For Sage Creek’s junior varsity team, Brasher is a middle (the person who blocks and hits). On her club team, she plays opposite (a different position of a hitter).

“Freshman year they told me I would be really good at middle because the tallest person can usually block the easiest,” Brasher explained, “during club season I played opposite, [so] I have played front row this entire time.”

Brasher does not just love the positions she plays, but the entire team environment as well.

“I really love the team aspect of volleyball. I have met my best friends on the team, and it’s just like a family. You travel together, you do everything together. You have to build the team up and not just one person on there because every single person does something different,” Brasher enthused, “Unlike in gymnastics because it was really individual and very mental.”

Brasher is not the only one who enjoys being on the volleyball team. Alessandra Romero, her volleyball coach, also feels that she is a great addition to the team.

“Bonnie is a very hard worker. She has the ability to be a really great player as long as she is able to become more fit in her role as a middle,” Romero said.

Even though Romero feels that Brasher’s position fits the team for this year, she feels that she should focus on expanding the positions she plays to find what works best for her.

“She is a pretty young player so she could move to another position,” Romero advised, “because her future is endless since she is so young at this age.”

Despite Brasher still being so young, she has already made lifelong friends who support her everyday with her volleyball hopes and dreams. Her close friend Parmis Sanaei, a sophomore, finds Brasher to not just be amazing at volleyball, but also to be a friend with great qualities.

“Bonnie’s really caring and kind, and I feel like a lot of her qualities have rubbed off on me,” Sanaei gushed, “She inspires me to be a better person everyday. I love her, and I am glad that I got to get to know her this year.”

Throughout Brasher’s journey to find her passion in volleyball she has had her friends to help her with  the ups and downs. But she does not just want to be remembered as the “tall girl who plays volleyball” but as something more.

“I want people to think that I am a really nice person, I always try to be nice to everyone,” Brasher concluded, “I do not want them to just to know me as a tall girl who does not talk to anyone because I actually love people… I want them to think of me as smart.”