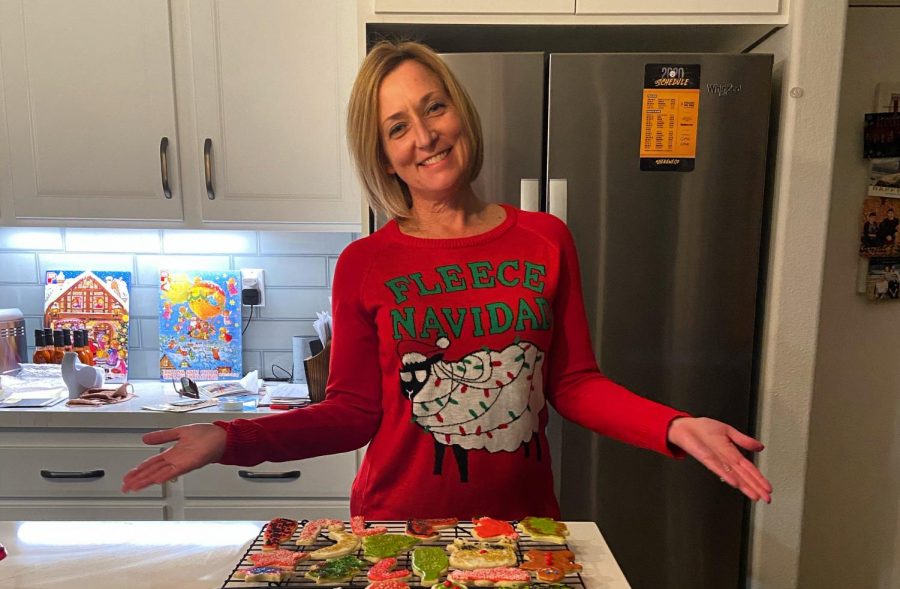 Jill Roth stands with a freshly completed batch of sugar cookies. Her fun-loving character shines through everything she does.

Sage Creek High School is close to empty as Spanish teacher Jill Roth walks up the stairs of the 300 building and into her second-floor classroom. The lights switch-on as she approaches her computer ready to start another day of teaching.

This year looks very different from her past years of teaching, but even so, she signs on each day optimistic about what she can provide students through the screen.

Roth has lived a life intertwined with Spanish since her first year of high school when she took Spanish 1, but her journey to becoming a Spanish teacher was not streamlined.

Roth grew up in a small town in Colorado where high school started in tenth grade. Her family was full of people who had studied French and German, and it was expected that she would follow suit.

“We had a Spanish-speaking population in our town and I was like, ‘Why would I study German? Who speaks German?’ I thought Spanish would be a lot more practical,” Roth said.

For her family, she took the uncharted path and unknowingly began a lifelong relationship with the language.

After taking Spanish for a year, she decided to seize the opportunity to volunteer abroad for six weeks. She traveled to a remote mountain village in Ecuador to build latrines for the local population.

“My Spanish was horrible,” she expressed.

But nonetheless, that was the experience that revealed to Roth the value of learning the language.

“I was using Spanish to help people and meet people and make connections and that sparked my interest,” she said.

Roth was quick to highlight that she was not always a confident speaker.

“Because of my insecurities with my Spanish speaking ability, I felt really comfortable talking to children. I  remember playing with them and asking them questions and them asking me questions because they are just so understanding,” she said, smiling.

Despite this experience, she still did not see working with kids in her future.

Her adventures in Ecuador really pushed her out of her comfort zone.

“The food situation was very interesting. You didn’t always know what you were eating or what you were going to be eating and one family was going to cook a chicken, but we actually had to pluck the chicken. I will never forget that,” she said, wincing.

Her experience in Ecuador made one thing certain, she was going to keep Spanish in her life. Upon returning to the States, she continued to take Spanish classes and waited to see where they would take her.

She thrived in the Spanish classroom and enrolled in DePauw University in Indiana where she studied International Business majoring in Spanish and taking the opportunity to study abroad in Spain at the University of Seville.

In Spain, all her studies were taught in the Spanish language.

“Taking classes was a shock. I took a history of music class and it was so hard, but it was good,” she said with a little laugh, shaking her head.

Although studying abroad had its challenges, Roth fell in love with Spain.

“The food, the music, and the people, the country is so diverse, it was amazing,” she said.

During her time there she met some of her closest friends including her future maid of honor.

She summed up her trip to Spain as a big growth experience.

She returned to Indiana and upon graduating moved back to Colorado. From there, she worked an array of different jobs, she went into marketing, and then wound up moving to Chicago where she worked as a document translator. She emphasized that she was hired by all of them because she spoke Spanish.

Now well into her twenties, she began to feel dissatisfied with her career.

“I [wasn’t] using my Spanish in the way that I wanted to. I wasn’t making connections to people; I was translating documents,” she said.

She began volunteering with the non-profit Chicago Cares. The program laid out different available volunteer opportunities and she became a Spanish teaching assistant for middle schoolers.

“What I really enjoyed was working with children and helping them speak Spanish and that’s when I decided, ‘I want to get my teaching certification!'”

Although she hadn’t seen it in her career path originally, teaching was a familiar job option for Roth.

“You can graduate from college and think you’re going to do one thing and go down three different paths to ultimately do something different and that’s fine,” she commented, “[The important thing] is to never limit yourself.”

By 29 years old, Roth was back in Colorado as a certified teacher and began her next chapter as a Spanish instructor.

She ended up teaching in Colorado, Washington, and finally, California, working in various school districts. She acknowledged that working in so many different places with lots of different people has shaped her into a better teacher.

“She finds ways to really get the class participating,” said her former student, Nathan Hall.

His favorite part of her class was the educational songs she’s infamous for incorporating into the curriculum.

“Those [songs] were the most fun parts… because it wasn’t too rigorous…but it helped us learn Spanish at the same time,” he said.

Roth approaches teaching Spanish in a multidimensional way. Her colleague, Lacey Hungerford, described how Roth not only teaches the Spanish language but informs students about Spanish-speaking countries, their cultures, and the opportunities speaking Spanish can provide.

Roth described why she tries to share her lived experience with her students.

“I think students sometimes think we just live in this little teacher bubble in our school,” Roth said, describing how this just isn’t true, “I have gone through the corporate world, I’ve done a lot of things,” she said.

Now 23 years into her teaching career, she, among the rest of the world’s instructors, faces teaching in unprecedented circumstances. Distance learning has been a struggle.

“I just feel like the computer is making it harder to make connections with students. I have to remind myself that we can find some joy in this,” she said.

With the nonideal circumstances of teaching during a pandemic, Roth has maintained her drive for educating the next generation of Spanish speakers.

“She’s fun, she’s supportive, she is knowledgeable, [and] she is creative,” Hungerford added.

These are all attributes that she has had to employ during this challenging situation.

When thinking about her Spanish life and her experiences teaching students, there is one thing that has stuck out most to Roth.

“[You should] never say never,” she said, ” Right now you might be like, ‘I have my three years of Spanish I’m done I don’t need anymore, but …you might go to college where you’ll pick it back up, or you’ll have that study abroad opportunity,…you may meet people who [speak] Spanish and then you want to keep your Spanish up because of friendships and social groups, so never say never that you’re done and that’s it.”