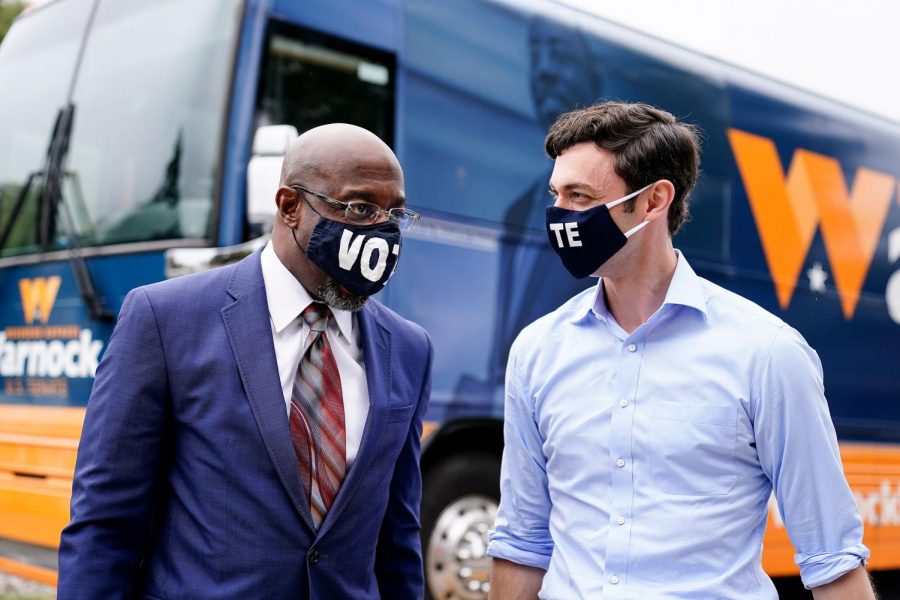 Ossoff and Warnock talk in front of a campaign bus. The two were both elected to the Senate on Jan. 6 and have given Democrats the majority in Congress.

With the threat of climate change, constant injustice toward communities of color, and the worsening COVID-19 pandemic, the Democratic government the U.S. has won is critical for the future of Gen Z and all the people of the nation.

Democrats Reverend Raphael Warnock and Investigative Journalist Jon Ossof have won in the Georgia runoff election. The victory was announced on Jan. 6 after the record-breaking turnout for the Jan. 5 election. Democrats now hold the majority in both the House and Senate and have secured the presidency, which has not happened since 2011.

In the Nov. 3, 2020 election, Georgia flipped blue for the first time since 1992 due to the increase in black, minority, and young voters.

Stacey Abrams, a political leader and grassroots organizer, who is best known for her historic gubernatorial run in Georgia, has been deemed responsible for the record-shattering turn out in the run-off election due to the consistent organizing work she has done on the ground to get historically marginalized, eligible voters, registered and to the polls. Her work to recognize the voting power and voting rights of all citizens has shifted the country onto the course for a more progressive future.

For the future of Gen Z, this win means everything. The Democrat-held House of Representatives and White House we acquired in November was helpful when looking to the future, but the necessary change needed in the country is only possible now that we have a Democrat Senate majority.

The Senate holds the power to approve or disapprove of the new Biden administration’s cabinet picks. It also can delay debate or block legislation, an act the Senate has been notorious for engaging in the last few years led by majority leader Mitch McConnell.

With McConnell dethroned and a democratic majority in Congress, progressive agendas finally have a chance to flow through the legislative branch.

While Biden is not a far-left progressive, his current plans, if enacted, could turn the nation around toward a brighter future.

Biden announced his proposal to move toward a “100% clean energy economy” that reaches “net-zero emissions no later than 2050.” The Democratic President also gives activists the opportunity to push for more progressive policy in the future.

With a blue Congress and White House, proactive and potentially world-saving policies such as the Green New Deal, introduced by Representative Alexandria Ocasio Cortez, a democratic socialist, have become possibilities.

This is critical to the future of Gen Z and the coming generations as scientists declare that an emergency response to climate change is necessary if we are to avoid the worst climate catastrophes.

With constant injustice toward the black community which came to the forefront in 2020 with the police killings of Breonna Taylor, George Floyd, and more, the new Senate also brings hope for reform. Biden committed to putting in place an array of policies to address systemic racism while Ossoff has said he will fight for a New Civil Rights Act, and Warnock has pledged to increase accountability in police departments.

Drastic measures are needed to solve this issue and these actions would bring us closer to a safer nation for communities of color and all residents of the U.S.

Republicans in control of the White House and Senate have allowed for COVID-19 to rapidly spread throughout the U.S. without proper precautions, and have failed to provide adequate relief to those struggling to make ends meet.

With this change in leadership, there is finally a glimmer of light at the end of the tunnel when it comes to the pandemic.

Biden has said that he will rejoin the World Health Organization, improve the Affordable Care Act, and is a proponent of state-wide mask mandates among many other efforts to lead the nation and globe out of this pandemic. The new Georgia Senators have also made clear the importance of taking the pandemic on full force with Ossoff committed to helping the federal government boost the federal health response and Warnock who has said he will support expansive COVID-19 testing and preventative measures such as masking and contact tracing.

These measures will be life-saving as COVID-19 has become a leading cause of death in America. It has been calculated that an American dies from the virus every 33 seconds. The global situation is also devastating as reports conclude that 1.89 million people have died from the virus.

These are a mere few of the gargantuan issues the nation currently faces but there is finally a path out of the dark injustice that has plagued the country during the last four years and the entirety of American history. We are moving into the light of progress for countless issues such as LGBTQ+ rights, funding public services, women’s rights, and more, with the incoming administration.

Not only does Gen Z have hope when it comes to the values of the new Senate majority, but we have also gained diverse leaders in the process. Atlanta, the largest city in Georgia, has a population of about 52% African American people and now has their first African American Senator in Warnock. Ossoff has become the first Jewish senator from Georgia and is now the youngest member of the Senate at 33 years old. These developments paired with Kamala Harris being the first Black, first Indian American, and first woman vice president-elect shows that the country is finally pivoting toward being led by a diverse body that truly represents those who make up America.

Because of these historic wins, I have hope. Because of these events, we as Gen Z have a chance at a quality, livable future, a chance at surviving this pandemic along with our families, friends, and community members, and coming out on the other side with the adequate resources to reconstruct our lives. These victories signify that a future of equality, justice, and opportunity for all is possible.

The blue wave the people of the U.S. have initiated has given Gen Z prospects for a brighter future in America in regards to the health of ourselves, our communities, and the planet. While these are uncertain times, it is also a time for us to rejoice and take action by pushing the new government to create the future we both want, and desperately need.