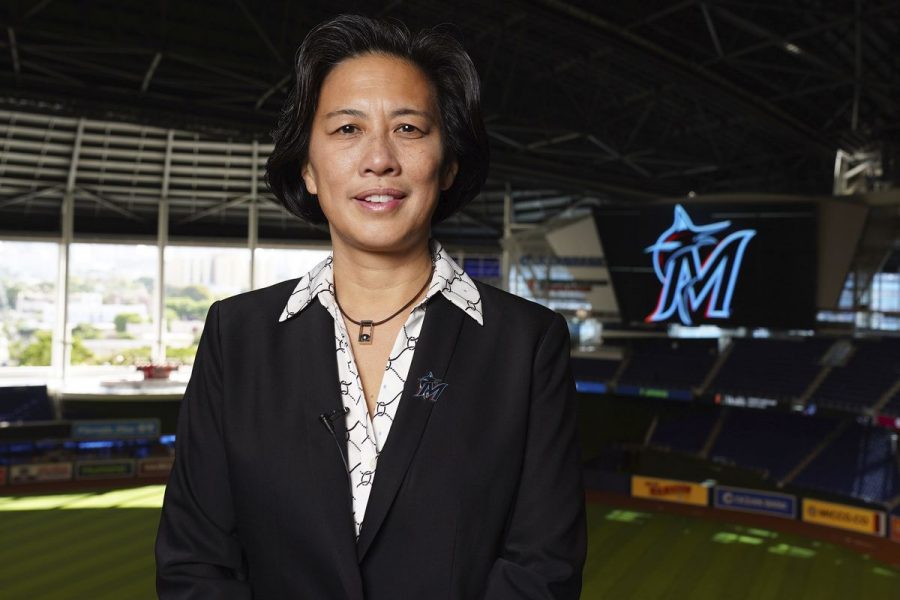 Kim Ng stands in Marlins Park, her new home as she takes the reigns of the Miami Marlins. She looks to bring the Marlins back to the postseason and bring a championship to Miami in her tenure.

On November 13, the Miami Marlins led by owner Derek Jeter hired Kim Ng as General Manager. She is now the highest-ranking female in North American Sports.

But Ng didn’t just break the glass ceiling for women in sports. She hit it out of the park, and potentially paved the way for more women to play prominent roles in sports dominated by males.

Ng wasn’t the first female to play a role in MLB. Prior to the 2020 season, the San Francisco Giants hired Alyssa Nakken to be the first full-time female coach. However, Ng’s story is one of perseverance and determination.

She graduated from the University of Chicago and became an intern for the Chicago White Sox in 1990. From there she worked her way up the ladder, impressing many people. One particular example is when she became the first woman to go up against superagent Scott Boras in an arbitration case. She also won.

After her time with the White Sox, Yankees GM Brian Cashman hired Ng as assistant GM at age 29, making her the youngest at her position in MLB.

“As assistant general manager with the Yankees, she was indispensable to me when I first began my tenure as the GM,” Cashman said in a statement. “Kim was a tireless and dedicated executive.”

Under Cashman, Ng successfully negotiated contracts with big names such as Mariano Rivera and Derek Jeter. Ng would continue to grow her relations with people such as Jeter and also Joe Torre, former Yankee star player, and Yankee manager while Ng worked under Cashman.

“I always talk her up at owners meetings,” Torre told Jim Caple. “At some point, somebody just has to ignore the fact that she’s a woman and just make a baseball decision. And if they do that, then I think she will get an opportunity. Somewhere.”

Ng would join the Dodgers as assistant GM in 2001 and leave to serve as senior vice president of baseball operations for MLB in 2011.

Ng would continue to search for a GM job, interviewing with teams such as the Mets, Giants, Padres, Mariners, and Phillies.

Eventually, her perseverance paid off and she was hired as the Marlins GM under Derek Jeter.

“We look forward to Kim bringing a wealth of knowledge and championship-level experience to the Miami Marlins,” said Jeter. “Her leadership of our baseball operations team will play a major role on our path toward sustained success.”

There were some points in Ng’s career when she thought she would never get where she is today. However, she promised herself she would become a GM one day.

“At the end of the day, if this doesn’t happen, I’m not going to see it as ‘My career was a failure,'” Ng said in an interview with the University of Chicago Magazine.

To give some perspective of how long Ng has been waiting for this opportunity, she has been in the baseball industry for 30 years. When current Brewers GM David Stearns was hired, he had been alive for 30 years.

Now, almost everyone is rooting for her as she becomes the first female GM and takes control of the Miami Marlins, a team that made the playoffs in 2020.

“All of us at Major League Baseball are thrilled for Kim and the opportunity she has earned with the Marlins,” MLB Commissioner Rob Manfred said in a statement. “Kim’s appointment makes history in all of professional sports and sets a significant example for the millions of women and girls who love baseball and softball.”

She has most certainly set an example for girls. Her story is one of perseverance and dedication

and shows innumerable girls that a female can play a prominent role in a male-dominated industry.

Now, Ng is up to bat. Not only as the GM of a playoff-hungry Marlins team but also as someone who could go down in the history books as one of the first females to play a prominent role in baseball and inspire countless girls to pursue a career in baseball.