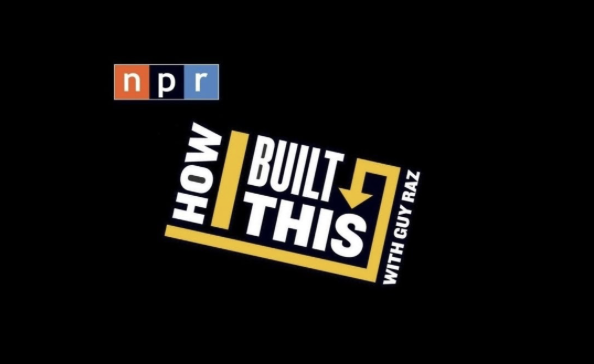 “How I Built This,” an inspiring NPR podcast, centers on sharing the stories of the different pathways founders of some of the worlds most well-known companies have taken to reach success. The podcast can be found on Itunes, Spotify, and even provides inspiration in the form of a book: “How I Built This: The Unexpected Paths to Success from the World's Most Inspiring Entrepreneurs.”

Started back in 2016, “How I Built This” with Guy Raz has been the go-to podcast to gain the inspiration one needs to transform concepts into reality. Highlighting the various “journey[‘s] about innovators, entrepreneurs and idealists—and the movements they built,” “How I Built This” uncovers the shockingly windy pathways many of the most successful, prominent founders of Fortune 500 companies and more have taken to end up in the impressive positions they sit in today among society.

The intriguing podcast zooms in on stories like how a simple hot dog cart side job led to the monumental creation of Shake Shack, the journey of an ice cream shop selling unusual flavors led to the expansion of what’s now known as Ben & Jerry’s, the business school brainstorming session that led to Doordash, and the foundation of others like SoulCycle, Dave’s Killer Bread, Whole Foods, and more.

Currently ranked on the Top 100 Podcasts chart on iTunes, “How I Built This” is not only incredible in the attraction it’s gained from its American audience, but stands impressive in the valuable insight and empowerment it provides to its listeners.

Raz claims what makes “How I Built This” so unique and unlike other podcasts is its capability to “tap into something deeper: “Who are you when you’re on the bathroom floor in the fetal position, crying because you are not going to make it to the next day?”—tackling the emotions of the audience with the message that even the most successful people known to mankind have the potential to lose sight in their goals just like any other human, but nevertheless, get through the difficulties presented before them.

The 40-90-minute episodes start from reflecting on the childhood experiences of the founders and work their way to the point of the creation of their businesses, while additionally reflecting on the progress each company has made up until the time the episode has aired.

Hardship, perseverance, and optimism are the three components prevalently expressed throughout each and every story featured on the podcast. Listeners truly gain an understanding of the importance of dedication to goals, despite the commonality of failure and mistakes that are made along the process of reaching success.

Under the circumstances that a great percentage of the world faces today with online education, virtual workspaces and the extra free time that comes with them, the concept of ‘building a business in your bedroom’ is an actuality for many people. “How I Built This” instills the confidence in its audience members to do just that, and provides the extra motivation and inspiration for one to conquer their long-term goals rather than wait until they feel as though ‘the time is right’ to make the effort in achieving them.

A podcast like no other, “How I Built This” eliminates the misconception that goals bigger than oneself are unachievable by providing relatable stories of how people, once in a similar position to the audience, persisted through the challenges they once feared to face and grew accomplished businesses because of their ongoing determination.